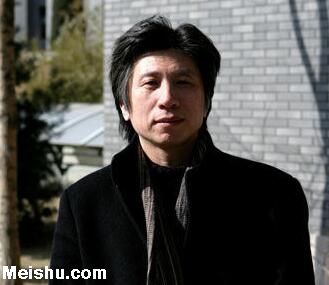 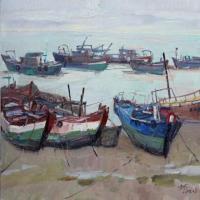 Since the 80s of last century, Fan Dian has been running around the world's cultural community, and actively promote China's contemporary art movement and international art exchanges. After Chinese served as curator of the museum staff, he will strategically and resources this way into the Museum of art, which to show the classic art of National Art Museum of contemporary art gradually assume the dissemination and popularization of function, make contemporary art from the underground state into the official and the public.
In 2008, by the opportunity of the Beijing Olympics, Fan Dian launched a series of major Chinese and foreign art exhibition in China Art Museum, including cooperation with the Dresden Museum of art, vivid scenery through the German space art ";" Gerhard Richter Art Exhibition "and so on, have become the highlight of the annual exhibition also held for the famous contemporary artists; the exhibition, such as the" Manolo Valdes Art Exhibition "," garden Utopia -- the prospect of Art Exhibition "opened up art galleries cooperation examples; at the same time, Fan Dian actively will be the new art form is introduced to the public through exhibitions, such as" synthetic times media Chinese 2008 "international new media art exhibition opening (although the exhibition quality mixed reviews, but after all, held at the art museum is the first such exhibition). And I want to believe - Cai Guoqiang solo exhibition, no doubt during the Olympic Games for the art museum to establish a good reputation and international image.
Whether it is the exhibition planning, promotion or museum public functions, Fan Dian's goal is to make Chinese positive appearance for contemporary art, its position in the Chinese mainstream art, and western mainstream docking. He put forward that "to achieve the basic function of Art Museum, we must turn from the artist centered to the public centered", and tilt the balance of the Chinese art museum to the public.
In 2008, the Chinese Art Museum continued to hold the art gallery academic lectures, so that the public understand the characteristics of art development. Fan Dean also led the China Art Museum exhibition will be displayed around the country in order to popularize art in the general public. In his efforts, by the end of 2008, the relevant government departments have been approved for the construction of new Chinese Museum, will build a new museum in China near the bird's nest, nest around which will gradually develop into a new cultural centre in twenty-first Century. Fan Dian's actions have produced enormous social benefits and are considered to be the best curator of contemporary Chinese art to the general public.

Calligraphy is a life course of energy consumption, this will be the mark of life falls in the end." Fan Dian said. In his "Chinese Art Museum collection of works by contemporary masters of calligraphy - Volume", do a thorough analysis and study for important activities and contemporary calligraphy calligraphy works and creation phenomenon, he insisted on outstanding contemporary artists and their works of literary criticism, not only to guide for artists, but also make their own research continuously deep. He also inspired himself by studying the art and style of ancient and modern artists, making his creation more basis. At the same time, his creation in turn makes his theory verified by practice.
Fan Dian praised Wang Dongling's calligraphy, called the "ink entirely by the spirit, from the spirit of the writing of abstracts, they bring visual experience, is not a watch, but to experience a situation, a kind of feelings." In fact, as a calligrapher Fan Dian, he also focus on spiritual transcendence. His works are simple and vigorous charm is dumping, writing smooth, powerful, the majestic atmosphere, his Chinese contemporary art leader temperament and behaved most incisive mind.
The value of the artwork is ultimately determined by the artistic content of the work. And art is evolving, not static. In a style, which eventually catch the ancients, and abandoned by people. Especially the art of calligraphy, most likely to go on the wrong style, some calligraphers from young until old age, in addition to the skill slowly deep, no big change, this is a big loss. Therefore, the art of calligraphy to innovation, but innovation is not new in order to be different. Fan Dian said, with the times, grasp the aesthetic characteristics of the era of creation, to cater to the market and a taste is different, because the two different purposes, the former is to keep advanced in art and recognized by people, while the latter showed no respect for art. As long as the clear boundaries, the creation can not only keep the avant-garde, but not out of the track of artistic development. Therefore, Fan Dian's creation, can adhere to the fusion of the sense of the times and traditional culture. In the innovation of creative skills, he from a critic's point of view, the comprehensive strengths of each, with the combination of traditional techniques, works as well as simple, and otherwise a charm, self-contained in the unique style of calligraphy from ancient to modern times.
In Fan Dian's view, calligraphy is a kind of creative behavior is a way of self-cultivation. His creation is not only the practice of his art theory, but also the cultivation of inner spirit. He does not plan fame and fortune, only for a spiritual pursuit, while doing some research on his own theory. And this is a creative idea and practice to combine to make his calligraphy works not only have tricks, but beyond the rules, both look extraordinary, but also avoid the uninhibited. Each text, have strict rules and theoretical basis, but in a unique creative mood into a spirit, a kind of feeling, a kind of artistic conception.

Preface for "international contemporary sketch Exhibition"
In 2000, China Central Academy of Fine Arts and University of New South Wales, Australia, Academy of Fine Arts, Glasgow, England, Academy of Fine Arts formed an international sketch exchange project". In recent years, the three party exchange teachers held short workshops, held a small exhibition of works, also held interactive sketch teaching seminar. This is what we call "triangle exchange" project of the three institutions are benefiting. The project runs round. We held the conception of a large scale of academic activities in Chinese. With Xi'an Academy of Fine Arts, Guangzhou Acmdemy of Fine Arts colleagues discuss, together with the Academy of Fine Arts in support, decided to hold a "international contemporary sketch Exhibition", the exhibition will have on display in Xi'an, Beijing, Guangzhou and other places. "There are from three countries and more than and 10 Academy of Fine Arts sketch works, most of which come from the college teachers in the hand - this is the origin of the album.
With the further deepening of reform and opening up and the rapid development of higher education, China's various Academy of Fine Arts are expanding foreign exchanges, in various exchange projects, but also more in-depth academic level. But generally speaking, these years, in the art design specialty in the field of communication is relatively more, this is because we can see some foreign art institutions in design education to adapt to the historical experience and reality and the needs of social development. We just unfolding design education is also very need to catch up in this regard and supplement. But in the field of plastic arts, due to differences in culture and teaching traditions, the scope of foreign exchange is not broad enough, often only in the level of information transfer. In the basic education of the modeling subject, it is lack of mutual observation, discussion and learning. In fact, in the "traditional" professional disciplines, Chinese and foreign art education today has a lot of common topics need, but also worth mutual exchange, to explore. For example, there is no doubt the importance of sketch in the field, a new development in many aspects of contemporary culture, educational objectives, teaching methods, it should be said that we are in many ways is a common problem. In a western art education is generally free form, lack of basic teaching views, in fact, people have been doing sketch expression and sketch teaching and other aspects of research. However, Chinese art education attaches importance to the tradition of basic education. Today, it is not a rigid one, but a variety of academic orientation and exploration style. Only after the elimination of cultural differences on the understanding of each other, we can see each other, Chinese and foreign art education exchanges can be launched deeply. The real purpose is to be called "international" academic exchanges -- this is held in the exhibition.
An exhibition and a picture book is not enough to summarize the "international" and "contemporary" appearance, but through them. The sketch as works of art today as a teaching situation and other category features. Problems generally is clearly visible. Just as all art has the characteristics and limitations of "Modernity", the sketch has quite obvious contemporary attribute. The effect of contemporary culture and art concept on sketch and reflection in sketch make people see many kinds of sketch. It is more important. Through different appearance, orientation, concept can probe the creation psychology belongs to "thought" level, can also see this kind of "level" and "do" the observation method and performance method. In the west, Hermeneutics (Interpretation of Art), cultural theory (Sociology) and phenomenology (Art) has become a significant feature of the contemporary knowledge view, in the sketch expression and is also reflected in the sketch teaching. In other words, drawing further into the "humanities" category. In Chinese, many teachers of Academy of Fine Arts are trying to theoretically explore the sketch in the contemporary cultural background of new possibilities, some schools under a deep research work in The China Academy of Art for example, are like painting research, China Central Academy of Fine Arts design professional foundation in the teaching of "project teaching" research etc.. Both Chinese and foreign, all kinds of practice and tries to establish a new method of sketch origin, the sketch of the "teaching" and "sketch creation" has been linked to teaching theory and educational goals linked. Therefore, in this exhibition will be launched. The seminar will help from the sketch of the function, purpose, ideas, methods of deployment, really promote our teaching reform -- this is to achieve the goal of the exhibition and symposium.