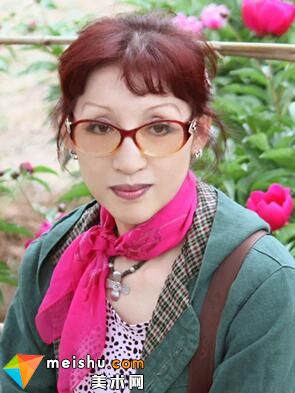 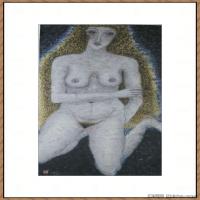 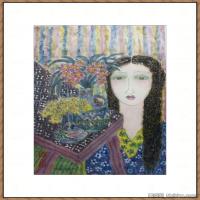 Chen works portraits accounted for a large proportion, through his works, we can see the inner world of the characters, or sad or happy, and very representative painter in the circle of contemporary beauty, known as the Pan Yuliang name.

The famous comments - Chinese and Western, ancient and modern learning

Chen (Chen Xiangfei: Chen Deying,), the beauty painter of the hometown of Confucius and mencius. Her paintings, as her image. Her name is full of Chinese traditional lady elegant temperament, and many Western painting ambiguously implicative. We can enjoy the view of her paintings to China traditional painting and artistic conception, they can comprehend western painting master Picasso's impression of thinking. Can not help but make people overwhelmed with admiration for!

We appreciate the beauty of the paintings "Chen" female figure that elegant taste, style, deep background, color rendering, subtle expression, very reminiscent of painting master Picasso's style, because the years of studying the works of Picasso Chen, consciously or unconsciously, to have into the room full of fragrant orchids. For a long time and "Jueqi incense"!

Chen's paintings, Chinese and Western compatible, ancient and modern. Both the ink painting freehand quintessence, and thick and heavy in colours of Western painting. But with good character, painting is more prominent. Ladies under her pen, the myriads of changes from the Pope, a thousand million homes not feeling. She always put their own understanding of life and yearning, melt into John tube, poured into the back of paper. Whether it is in the Red Army female soldiers, or whether it is the great lady first awakening interest in the opposite sex; Western lady blonde, or quiet ladylike daughter of a humble family, have a common characteristic: oval face, straight nose, eyes, China very much enamored of traditional culture has always advocated the lips. This is because of her creative ideas, and always contains her aesthetic taste and ideal artistic conception have great originality. She is the most perfect soul that she yearns for, melting into her paintings.

"Enchanting smiles six palaces, no color." Bai Juyi is depicted in "song" in the beauty, the answer we found in Chen's paintings. On the old people ladies