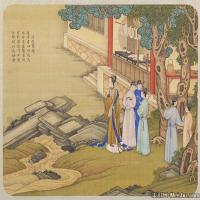 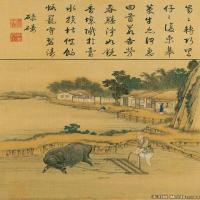 iao Bingzhen, the Qing court painter. Years of birth and death is unknown, the word is Seoul, Shandong Jining, Kangxi Guanqin day prison officials face, dedicated to the inner court. Good at drawing figures, absorbing Western painting, heavy and dark, the tower sector painting, carved Seiko, painted with "ladies", "farming plan" and so on.
Artistic achievement
Jiao Bingzhen is a disciple of the Catholic missionary, John Doe, through astronomy, good at portraits. Kangxi official Guan Qin days monitoring facial features, painting "Royal capacity." During the late Ming and early Qing dynasties, Western priest sermons in China, each religious painting as a propaganda tool, the Qing Dynasty art academy dedicated to many Western priests, and the Qin days in the main things, so Jiao day with contaminated, then learning the law, The fashion dictates. Jiao Pingzhen flowers exquisite, its landscape, figures, floor view of the location, since the near and far, arrogant and small, unhappy hair, Department of Western painting. Taste Fengzhao "farming plan" forty-six, village scenery, Tian farming, make the best. Said the purpose, rotary engraving version of India gave Chen workers. Kangxi twenty-eight years (1689) Ichikami article painting taste, Yong Zheng four years (1726) had Zhang Zhao portrait, Jiang Tingxi King.
As a court painter and a scientific official, Jiao Bingzhen, as a court official, worked in the Imperial Academy and knew more about arithmetic and science than the other court painters who served as civil officials. For the westerners based on math and physics Painting is also easier to understand and accept. This is only an objective factor, when the Emperor Kangxi for the participation of Western painting's love and appreciation is Jiao Pingzhen learning subjective factors and important motivation. His works have been featured in many works, such as "Chen", which are more colorful, more compact and detailed. The characters of "participating in the West Law" are mainly arranged in the size of the characters, Perspective and the use of light and space processing, the characters are mostly arranged according to the principles of large and small far, unlike the traditional Chinese painting by the characters as the height of the size of the habit of character size, space processing, but also the characters on a real space , To create a space for the characters as the center, building size also take into account the human scale, even at the expense of the integrity of the building space.
JIAO Bing-zhen's painting has always been a kind of Chinese reality, it seems that the total can not get rid of the painting "freehand" thinking, in his personal work "Come back Come map", we see the traditional Chinese literati painter feelings, There are some perspective on the structure, in terms of subject matter selection or the screen in a large blank the use of methods, have expressed the literati habitual mountain forest recluse thoughts, mood far-reaching, giving infinite reverie.
Ming Dynasty, there is a painter named Tseng whale (1568-1650, the word of Pochen, Putian, Fujian, who live in Jinling), changed the traditional portrayal of Chinese characters, not Pastel rendering, , Bump, or even a picture for each painting, baking up to dozens of layers, until the satisfaction date. At that time, follow him in this way painting portrait of many people, known as the "Pau". JIAO Bing-zhen is the second after Zeng Jing, to create a "Western School" of the famous painter, and Yu Zhiding's "white painted faction" and said the three major faction.