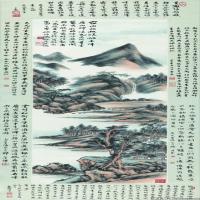 Frederick aloof, (1882~1954), name, number Di Ge, alias Songshan Buddhist, late sign it. Origin Changzhou Jiangsu. After the revolution of 1911, live in Shanghai Songshan Road, the Department of the room for "Songshan cottage". Since childhood love painting, thirteen, four years old to sell paintings have been received. Early fine ladies, Tang Yin, Qiu Ying as the law, ink elegance; old age in the landscape, with his elegant atmosphere. Good chant, zhuanli cursive work, both strength and charm. My good friends, Wu Changshuo and mark; and Wu Hufan, Gu Heyi, Lu Lian Fu more exchanges. To make quite expansive, three, 40s, with Wu Hufan, Wu Daiqiu, Wu Zishen in Shanghai painting "three Wu Feng" said. Life selling paintings for a living. During the fall, in order to avoid the puppet people draw deliberately raise runbi, a traitor at large, still worry, frustration, and hasty brush, a problem, with "do not return without, Jiashan is good many tigers" of the sentence, the puppet PI for tigers.

A masterpiece of "Ladies holding map", "winter peach map", "the Liujiang River autumn Yan", of which the first two are collected in Shanghai Museum paintings Feng detached Museum, the latter recorded in "China modern paintings". The publication of "Feng Lin Xiang Fu Yan detached landscape", "Feng Dige album". In addition to "Wuyi", "peaks" Akiyama streams, "Sam map", "Cangshan Ji" and other works.
The maximum size for the "Li Ying Qiu Ji Hanlin map" 110 cm wide known in the masterpieces, 188 cm long, in order to draw a huge work, Mr. Feng Chaoran which lasted for seventeen years, become a piece of the painting in the course of the longest. Can be called as the representative works of the ancient transformation of Feng's detachment. The works in 2009 to Chinese Autumn Auction on the price of nearly 2 million yuan turnover, a year of the works of Feng Chaoran world records.
Frederick aloof landscape painting, temperament gentle, from "Four Wangs", Wen Zhengming, Dong Yuan and Ju ran back, is active and orderly, innovation.
"Summer mountain waterfall" depicts the summer mountain scenery, a southern Dong Ju left rules, style.
The mountains rise steeply, valley pine trees, a wild profusion of vegetation, coiled, waterfall rapids, falling a thousand feet wide, the shore, the vast graciousness, courtyard cottage,
Colorful shade,
The people as a pleasurable occupation adds infinite vitality for nature.
The focus of this figure painter "quiet", "deep", through the back disc winding valleys, layers of the deployment and performance of the summer in the mountains quiet and pleasant,
Refreshing and comfortable,
So that they stay in the mountains and the world, looking for and enjoy the infinite pleasure of nature.
Feng detached family
In the former Shanghai No. 90 Songshan Road, lived a famous painter - "Songshan cottage" master Feng Chaoran. He Jiong, No. Di Ge, and the word was carefully. Feng Department of Jiangsu Changzhou people, born in the eight years of the Qing Dynasty, in 1882, is a versatile artist. He figures, ladies, landscapes, flowers and birds, insects, animals, and all pieces, to force and position charm. The famous painter Ye Gongchuo was in Feng Dige before the album inscription written in "transcendental painting, God rules, full of energy, and show the so-called bone Tiancheng, in my own......" In order to praise Feng can create their own personality and style. Such a versatile artist, in the ancient and modern China painting is indeed a rare talent
.
Feng Lao being indifferent, not fame and fortune in life constraints, has never held a personal exhibition, never advertised himself. He was a year old at the age of 60 in the figure of the "New Year paintings, and it is not for work," the sentence, he was magnanimous enough to express the mind. "Artemisia mountain cottage" on fine days in spring and autumn, Tan Yi Road, Guests feel at home., there is no false date. The painter Wu Changshuo, Long Feng detached at the age of 38, two people for the friendship between old and young people. "Songshan cottage" was hung two paintings: "day water park set of hanging scrolls" and "ark, from the Wu Yi Hua". In the Feng detached door, cultivate Lu Yanshao, Zheng Mukang, Tang Yi Fang and other famous artists, even Yu Zhenfei is a disciple of Kunqu Opera master Feng, often to the door. Pingtan masters Yang Zhenxiong often went to visit, yang to absorb many Kunqiang charm in singing, it is with them "Songshan cottage" gathered from real, has a direct relationship.
In 1922, Feng old at the age of 41 have a son, named for the first, in 1951 two Feng's father and son to a movie on China studio photo, Feng Lao wrote a poem: "the tree Posuo seven little Shu Qing, a bi according to speech, Jiaoran and bad Weng, just this year with success." With more than seventy years of "Essien years old, let the son is thirty, pictured left by Ballantine, mark, Shen play title."
Feng Rangxian graduated from the Department of architecture, Jiang University in 1944. Former deputy chief engineer of Shanghai merchants Bureau before liberation, and long term service for water transport engineering design unit of the Ministry of communications. From 1988 third harbor engineering Shanghai Department of Transportation Survey and Design Institute retired technical title is professor level senior architect. He was the chief engineer of the Chinese Harbour Engineering Corporation in the Middle East, Arabia, United Arab Emirates. In 1990, he was hired by the San Francisco FCA architectural design company, as a consultant architect, retired in the United States in 2000, is now the United States, California, walnut creek. Let the first at his father's teachings, but also good at painting, only in landscape, only for leisure entertainment or friends.
The author and let the first from 1940 graduated from the Shanghai Nanyang middle school, friends with complete mutual understanding for more than half a century as one day. I got married in Shanghai in 1948, the first let be the best man, Feng Laoceng five linked with the book. Let me first and early for his father fed plum roll, with Wu Hufan as mentioned in the previous set of words, is a top grade, precious. In 1999 2001, I went to the United States twice, both to let the first gather and walnut creek. He has two women and two men: first letter green, at the age of 36 due to asthma deaths; the markings, retired, now living in Shanghai; the eldest son Qiu days in Australia, and MBA, currently doing business in Melbourne; a male Cheonan, graduated from the University of Southern California, received a master's degree in architecture, as a registered architect in California currently, the chief architect of the subway system in San Francisco area.