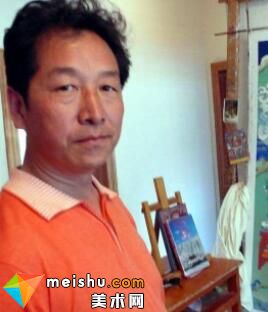 Border Bawangdui, Tibetan, born on February 2, 1969 in Xigaze, Tibet. Graduated from the Department of Art, Tibetan University in July 1991; engaged in fine arts teaching in Lhasa Normal School from July 1991 to December 1994; engaged in photography and other work in the Department of Propaganda, Tibetan University in December 1994 and July 1999; and taught in the Department of Tibetan Fine Arts, Art College, Tibetan University since July 1999. Study and work. During this period, from September 2000 to July 2001, I completed the major postgraduate courses in the Assistant Professor Advanced Course of Mural Department of Central Academy of Fine Arts. In January 2002, he took part in the National Master's Examination, and was admitted to the Master's degree program of Tibetan Fine Arts, College of Art, Tibet University. He was formally admitted in September of the same year.

At the end of October 2005, he participated in the Art Exhibition and Academic Exchange of Asian Culture Week with the theme of "From Tradition to Modernity". In 2008 and 2009, he was awarded a scholarship for Himalayan literary artists by the Studio of the Center for Literature and Art in Formont, USA. He has participated in the Tibetan murals project in cooperation with Norway and Denmark since 2008. From October to July 2009, I studied fresco conservation at the Institute of Heritage Conservation, Royal Danish Academy of Art.

In 1988, Huangshashan participated in the Contemporary Tibetan Art Exhibition held in Beijing.

In 1991, his work "Time and Space, Life" was selected into the book "Contemporary Art of Tibet".

The work "Riding and Archery Altar City" won the third prize in the art exhibition of the fortieth anniversary of the peaceful liberation of Tibet.

In October 1993, he participated in the design and production of the painting and sculpture project of the Tibetan scenic spot in the Beijing National People's Park.

In August 1994, his works "Time and Space, Life" and "Making the Ming Buddha Mother" participated in the Tibetan Art Exhibition held in Japan and were collected.

In 2000, the works "Riding and Arching Altar City" and "Sun, White Horse, Earth" were published in the ninth issue of Art Magazine.

In addition, many paintings and photographs are published in magazines such as Tibetan Folklore. At the same time, many works are collected by foreign people such as Australia, Germany and the United States.