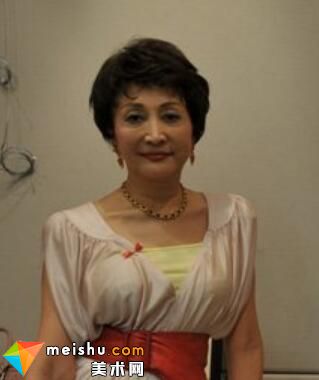 What China draws Fu Baoshi of altar great master is female, was born in Jiangsu Nanjing 1947, it is the daughter that draws cook holds stone gentleman in the arms, it is active the famous artist that draws altar in current Japan and international, was graduated from Department of Chinese Language and Literature of institute of Nanjing normal school 1970 classic literature is professional. She " young Cheng Tingxun " . After the university graduates, be in teach of Jiangsu basic level, begin to learn brushwork. Went to Japan to study abroad 1979.
What China draws Fu Baoshi of altar great master is female. Her from a child sees father make a picture, the first select after becoming our country reforming and opening again learns artistic student studying abroad to Japan, devote oneself to to promote Chinese wash, bear the palm countless. The main creation content that picture of group of hold a memorial ceremony for of barrier mural, folk and poetic flavour picture are her. She thinks " wash is the art that can behave author heart trends most " . Teach of be adopted as heir to one's uncle adopts the creation technique of stone gentleman, straight pen with the wrist raised when writing makes a picture, line is composed, writing essence of life is wonderful, extensive of work imposing manner grand, it is more gigantic make, have " landscape forces be like therefore old man " praise. In the meantime, can feel method of traditional ability of water Chinese ink and times organic again ground mix is together, created a series of abounding to fluctuate to fill affective work again, become culture of Sino-Japanese today two countries to communicate a domain to be full of the painter of great reputation.
Was graduated from Department of Chinese Language and Literature of institute of Nanjing normal school 1970, into Jiangsu the imperial art academy that save a country was engaged in drawing creation 1978. Studied abroad 1979 Japan, be graduated from Tokyo fierce to hide Japan of wild art university to draw is, obtain master's degree. Japanese Tokyo art is entered after lab of husband of gloomy of university smooth hill, husband of gloomy of Shi Congping hill. Wash is gigantic make, of great momentum, ad cool-headed, exquisite, lyric majolica, in China, Japan, United States, Switzerland, and country and the area such as U.N. , Hong Kong are held exhibit more than 40 times. 1990, obtain Japanese top art to comment on award " Lun Yamei art is admired " . Obtained Japan 1995 " prize of culture of company of divine way mind " .
Have on behalf of work " buddhism east pursue gradually " , " than hill the temple that delay all previous pursues " , " weather station Shan Guoqing temple pursues " , " 3000 courtyards the four seasons pursues " , " Zou visits drive column hold a memorial ceremony for " , " Zhang Qian, and the state-private Tibet home such as Annam of secretary-general of Chinese art gallery, U.N. is collected. It is our country one of contemporary and crackajack artists!