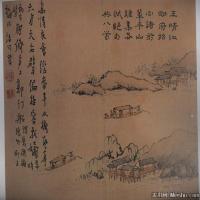 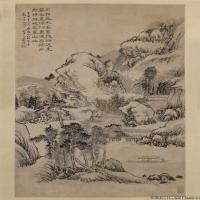 Gao Xiang in his later years due to the right hand disability, often left hand painting. And Shi Tao, Jinnong, Wang Shishen friends. The Qing dynasty Li Dou in the "Yangzhou Huafang recorded" in such a record: "Shi Tao died, the Western Tang Dynasty spring sweep each tomb, to death died." Means that, after the death of Shi Tao, Gao Xiang to the grave every spring, until the death did not cut off. From here we can see that the friendship between them is very deep. Gao Xiang in addition to good painting landscape flowers, but also skilled in portrait and engraving. His landscape painting method Hongren and Shi Tao, the painting of the small garden landscape, mostly from the sketch. Jinnong, Wang Shizhen poetry on the small, is Gao Xiang's handwriting, line drawing concise, air of realism. Author of "Western Tang Dynasty poem", "Yangzhou eight strange" one.

He and Wang Shixin are like painting plum, Wang Mei-chi, Gomel Jane branch, each interesting. Jinnong once said Gao Xiang's plum blossom "its thin, such as Heron Li Hang Ting, do not want to make people close to play."

Gao Xiangshan stone often "Phi Ma Cun" to draw, moss point just right, very little rendering, writing Concise, elegant ink, a sense of ethereal. Trunk commonly used double hook technique, leaves or circle or point, ink moist. He is a student of Shi Tao, but the painting is not the same with Shi Tao, his painting is very strong personality, it is Shi Tao, "the teacher of good fortune, with my law" embodiment. Gao Xiang in the landscape, figures, flowers, birds, calligraphy and other aspects of all fine, people can add some of his works on Yangzhou eight strange understanding, the realm of collection sometimes is not reflected in the economic value, but rather a collection of history, save a culture . At present, Gao Xiang's works rarely appeared in the auction site, the auction price of 100,000 yuan per square foot, but still higher than the price value. This is not much work with Gao Xiang, and only a small number of experts and scholars to understand what he caused. Gao Xiang is an important figure in the Eight Eccentrics of Yangzhou, Yangzhou eight strange [2] is a link between past and far-reaching important school of painting, his paintings are very worthy of collection.