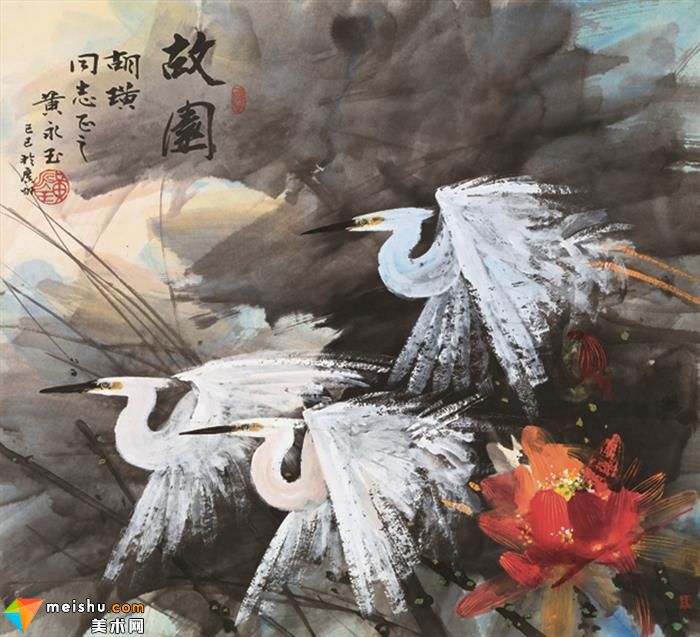 Cultural revolution experience
Huang Yongyu painting true love, true love. He traveled more than half a Chinese, experienced many political baptism, caring, love and hate, a strong personality to win a lot of sincere friendship for him. People in prosperity, adversity is not what make friends with congenial persons;, only feel the truth of it. During the "Cultural Revolution", many excellent paintings were exhibited as "negative materials" in art galleries. Huang Yongyu drew a turn a blind eye of the owl was named Jiang Qing, became more critical in main target. Can be in this black painting after the launch of one day in the morning, someone will be a rare owl in the capital quietly tethered to the door of Huang Yongyu. The expression of justice and truth that he touched, never forget. The day after, he painted the owl to commemorate. Huang Yongyu was criticized in the day, the old man is not afraid of a gardener to backfire, every day a bouquet of flowers sent to him. It is these ordinary people from the heart of the truth, become the spiritual support of Huang Yongyu suffering, making him more convinced that justice will eventually overcome evil, beauty is the most natural pursuit. He was gratified: "full enjoyment of friendship, feelings are not contaminated". Such a famous painter, but was used by Li Chengju, with his paintings do not cover fidelity certification, Li Cheng cited S--DNA Indonesia, took the paintings as the paintings of Huang Yongyu, sold to Anshan for help with a flat 28 thousand yuan aunt.
Packaging alcoholic
From the art master Huang Yongyu's hand "drunkard" packaging art design, Xiangxi regional cultural characteristics. The design conception of isolated, alcoholic liquor bottle ceramic crafts, flat Park in remarkable skill, casual free, unadorned chic, big park. Alcoholic wine bottle hit the most domestic packaging design fees. According to Mr. Li Fuqing recorded in the book "China wine culture": "after the sack of bottles in the market have appeared, bottle collection lovers of all ages."
"Drunkard" packaging box on one side of the decoration is Huang Yongyu's painting figure painting is a drunkard, carrying a "drunkard" in the drunk, one side of the box inscribed with 8 cursive Huang Yongyu: "not drunk, not too drunk." Figure and Huang Yongyu wrote and handwritten phrase: "drunkard drunkard back Jack too long, alcoholic drink cup 1000 ghost not drunk, drunk out of a million in Xiangxi." The 3 picture "drunkard" phrase is one of great charm of poetry, write "drunkard" is vivid, and later due to become "drunkard" and well known TV advertisements.
Drunkard wine culture and packaging culture complement each other, in 2002 selected China's ten major cultural liquor.
Enjoy life
- enjoy the life of Huang Yongyu
Huang Yongyu likes to build a house in the cultural community is famous, Hunan Phoenix, Beijing, Hongkong, Italy have their own luxury. Whether these residential architectural style or size, are very particular, such as the hometown of Hunan Phoenix Jade Mountain room, Beijing's "Hetang million", Hongkong apartment and Italy hometown of Da Vinci castle, is unique, and costly. A lot of people think he is doing nothing but money after the show wide bale, and he said, "the house is part of artistic creation, the house is not only a person's happiness, it is a lot of people happy
." Indeed, he designed and built the mansion has almost become a mecca for men of literature and writing readily. In March, he was still "Hetang million" done a few hundred people attended a large reception.
Huang Yongyu has just returned from Hongkong, he prepared a month stay in Beijing "million Hetang". "Hetang" is located in the eastern suburbs of Beijing, we drove from the city spent about 1.5 hours to reach. "Hetang" stands at the entrance of a small pavilion in the village, a few elderly people sit chatting leisurely in the pavilion, which is specially built to Huang Yongyu, he will be the pavilion named "McCain Pavilion", and by himself for the title of "kan Ting" two words a the plaque, the main hope passers-by, the villagers can rest and chat here. Can not think of later engraved with the "McCain Pavilion" two words. Soon after it was stolen, Huang Yongyu suspected "people from stealing". Since then, he has the inscription, in order to avoid theft again. "Kan Ting" became the "wordless pavilion". But from one side also reflects Huang Yongyu's fame, otherwise, people steal his word to do?
"Hetang" courtyard full of trees, tall buildings, spacious corridors, Lotus Pond lotus withered. In addition, people stop watching the courtyard and the dozens of trees, are said to have Jiaqing of the Qing Dynasty and Qianlong, together, at least every line has a history of hundreds of years, presumably in the plum blossom open unexpectedly, the courtyard is fragrant. "Hetang" is Huang Yongyu took 7 months to complete the design, even the house tables and chairs, fireplace, droplight also by him personally design. The whole design is completely adopted the traditional structures, cornices, corridors, antique doors and windows, style is concise and lively, simple and smooth. No wonder people who have met Huang Yongyu think he is a person who understands art and enjoys it.