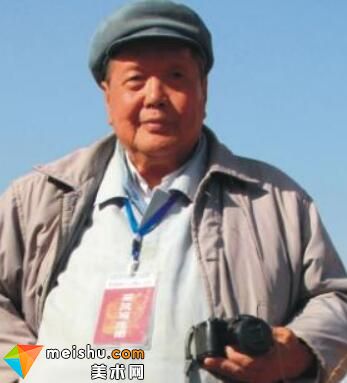 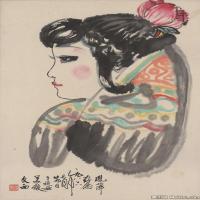 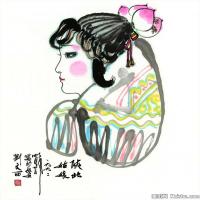 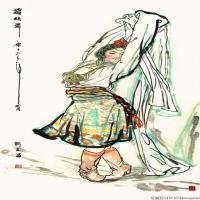 In 1946, Liu Wenxi read in Yangshan middle school, although the school condition is very poor, but the correct style of study, rigorous teaching, harmonious relationship between teachers and students. For the first time, he heard the art teacher say that there was a big painter named Da Vinci in the world. At that time, the translation was "Da Vince". Liu Wenxi thought: we are all "Wen Xi", he can become a big painter, why can't I? From then on, the more vigorous the west. Yangshan middle school but also attaches great importance to labor education, pay attention to the comprehensive training, often take students to participate in the work, pay attention to cultivate the students' love of work, love of labor people's character, all of this are instilled into Liu Wenxi's mind, affecting his life.
In 1948 two, Liu Wenxi's uncle Qian Xiaoheng (former vice president of Shanghai University of science and Technology) with the west to see the artist's Keswick flower and bird painting, figure painting, the West has great inspiration and education, he kept taking Keswick as painting teacher.
In 1949, the county's hometown liberated, first celebrated the founding ceremony, hanging on the podium of Chairman Mao and Zhu commander is like the western painting. Although he believes that painting is not mature, but it made him unforgettable, and was encouraging, for more than 10 thousand days after the draw picture of Chairman Mao's paintings open good head. That year, he was transferred to the county middle school.
In 1950, Liu Wenxi entered Mr. Tao Xingzhi founded the Yucai School (School of art is known) formal learning art. The school advocates the combination of teaching and living, combining with society, advocating the creation of social services. The most impressed to Wen Xi was Wang Qi's speech to the students about Chairman Mao's speech at the Yanan Forum on literature and art. Liu Wenxi began to understand why painting and painting and the relationship between revolution and the people. In school, Liu Wenxi hard study spirit has been the example of students to learn. He took part in the northern town land reform work, participated in the Korean War, and served as the student work, to contribute money also to solve their own part of the cost of reading.
In 1953, Liu Wenxi with honors admitted to East Branch of The China Academy of Art for five years, the Department of traditional Chinese painting. The Academy of fine arts foundation teaching regular, solid teaching order specification, Dean of Mr. Mo Pu often to the classroom to the students' homework, vice president Mr. Pan Tianshou often personally on the calligraphy and the flower class. In April 22, 1956, the New Democratic Youth League Committee of Zhejiang province China award to Liu Wenxi "outstanding" Miyoshi "activists". By the impact of Yanan revolutionary history and ancient yuan and other older artists, graduation internship, Liu Wenxi first went to Yanan. From then on, he loved the land of Northern Shaanxi and loved Yanan and the people there. After graduation, Liu Wenxi was appointed dean Liu Mengtian assigned to the Xi'an Academy of Fine Arts, along with artist Chen Guangjian.
In 1960, the "people's Daily" published the works of Liu Wenxi shepherd "and" Chairman Mao, Chairman Mao said: "I like the western painting, he is a young painter." The praise of the great leader greatly enhanced Liu Wenxi's creative enthusiasm.
In 1984, Liu Wenxi joined the Communist Party of China, became the vanguard of the proletariat.
In December 1, 1992, Liu Wenxi came back home to attend the fifty anniversary of the Changle middle school
March 1993 the first session of the Eighth National People's Congress held in Beijing, comrade Jiang Zemin met with Liu Wenxi.
May 21, 1993 to 31, the Liu Wenxi exhibition held in Beijing, as one of the organizers, on behalf of the county Party committee and government to participate in the hometown of Fang Haoquan, Xing Lice and other comrades, I also participated in the exhibition and participate in the preparatory work, and attended the Liu Wenxi exhibition seminar.
1997, as the eight National People's Congress Liu Wenxi met in Beijing, when the people's Bank of China is busy designing a set of RMB fifth.
In July 31, 2004, Liu Wenxi arrived in Taizhou from Shengzhou to visit.

Liu Wenxi's artistic purpose is: "familiar with people, strict modeling, speaking and writing, seeking creation", I hope the artist to improve the creation of quality products, inspired by outstanding works.
Liu Wenxi is the character of contemporary painting China Leekpai Kaizong his paintings, which represents the direction Chinese realistic style of painting, his artistic spirit of Chinese nation is the spirit of unremitting self-improvement, he is a bright pearl in the history of modern art Chinese.
Liu Wenxi is to draw Northern Shaanxi and become everyone, it can be said that North Shaanxi achievements of him, he also shaped the northern shaanxi. People will not forget the last century at the beginning of 60s he created the "four generations" bring people shock. In this forever annals, Liu Wenxi established his position in the history of Chinese art with the profundity of the theme, the vividness of the characters and the pioneering of the pen and ink skills. In his mind to look far ahead from a high plane, the wisdom of "dull remarks to sweep down irresistibly from a commanding height, die endlessly" spirit, to create a series of works in a society and concern about human beings and life. From the "Chairman Mao and shepherd" to "enjoy the music", from "and" to "poor old secretary ditch", the birth of each of his paintings will bring a piece of the sound of praise.
Liu Wenxi's art not only by form, language, skills to win, but also in his work to shape the image of the unique, vivid, authenticity occupy the commanding position of all. His heart to his feelings of the people of Northern Shaanxi, the Loess Plateau, the painting is the artist who would like him all over the town in Northern Shaanxi, drew thousands and tens of thousands of farmers portrait sketches? Based on this, he can be vividly portrayed, Yueranzhishang cavity real feelings. Form of exploration is important, he is through the form, language, skills and other means of performance, to continuously strengthen the image of the intrinsic meaning of expression and appeal. Liu Wenxi is a banner of contemporary painting China.
In the prosperous art trends, Liu Wenxi in the show a place of great ingenuity, tolerance. He put his artistic life is still pinned on the Loess Plateau in Northern Shaanxi, praising the people there is the soul of his work. He firmly believes that those deeply touched his beauty will be touched by others.
In recent years, despite his advanced in age, and with great enthusiasm along the old course of the Yellow River, the Yellow River began his series of works, which in 2004 the creation of "the Yellow River", "the Yellow River man" children have been published. The real, simple, real, natural, cordial and sincere in revealing the beauty of human nature is China farmers, ideological content, artistic quality and historical value of the classic.
His creative method and artistic style are consistent with his former. He is in constant exploration and innovation, looking for their own theme in the history of life touched and real life, thinking and refining the typical coordination and integration, and made the most of his painting ability to depict characters and processing work elements, and strive to achieve the perfect unity of depth and height of the art. In today's era, the rules and methods of creation of Liu Wenxi's masterpieces, especially valuable.
Liu Wenxi does not cling to tradition. He advocated the "innovation", and that "innovation should start from the depth of life, starting from the concept of expansion, with their own thinking, your vision, your feelings, to observe life with their brains and eyes are different from history, different from others the original place".
Retrieval of the creation of Liu Wenxi since the last century since the beginning of 60s boutique, fully demonstrated his originality". There are painters performance leaders, praising the people's work, also has the Tibetan Plateau, the Loess Plateau of the figure painting, and visited Europe scenery description, means of expression and language are rich and colorful, the artist beyond the current painting aesthetic China program, absorbing western modern art creative achievements, explore new areas of China ink painting in the eastern and Western art exchange.
In today's Chinese painting, a lot of famous master often set lattice bound by, or derived from the ancients, or from the ancients, or succumb to the traditional Western foot, or follow the modern genre approach, not to repeat the previous, is the repetition of others. Liu Wenxi is not the case, he had "one hand traditional", had "one hand for life", more than half a century of vicissitudes decades a symbol of war in ancient China, nourishes, Liu Wenxi, also in the smelting of Liu Wenxi. Liu Wenxi did not give up, when the world was concentrated to a global village, he set a higher goal for his theory of "loess school", this is also must hand toward the world". He will use limited life to practice the greater transcendence of his art.
Today, the richness of the world and the richness of the painter's personality, is the richness of the characters. Liu Wenxi is taking a break through the traditional way, he made the traditional Chinese paintings open up a fresh outlook and fresh.

In China contemporary art school we can not fail to mention Liu Wenxi and the school, with Liu Wenxi as the representative of the western group of artists, formed a strong lineup of artists of the school. In twentieth Century China the history of art, Liu Wenxi and his "loess school" is a certain historical position, his style influences the figure painting in the northwest, but also have a certain impact on the creation of Chinese figure painting.
His works show a kind of Western painter rough language style such as careful "Loess Sentiment" and "the people", "people", "ditch words," harvest "four generations", and the performance of traditional literati painting down and out feudal scholar bureaucrats with negative and decadent extravagant, boring boring life, contrast.
To show people the spirit of traditional culture of loess style as the theme, he works in the "loess culture" has been completely "the spirit of the Chinese nation". Because of his artistic creation, makes the Loess become a Chinese painting of eternal art totem, it is not only deeply affect the second half of the twentieth Century a group of artists, but also a profound impact on the early twenty-first Century Chinese painting. Needless to say, it will continue to affect the future development of Chinese art. Liu Wenxi studio has a special historical significance in the current situation with China studio.
In the past fifty years, Liu Wenxi has more than 90 times to the creation of Yanan, will always focus on shaping the common people and the leader of the people, and have created a modern Chinese painting "loess school". Under his leadership, a large number of influential artists, following the identification and acceptance of Liu Wenxi's style, to ordinary people, the scenery is loess aesthetic orientation in modern painting, Chinese formed an important and unique style of the school". For half a century, the school's founder Liu Wenxi diligently, painting and has always been to the people under the background of the Loess style and leader image category, form the shape of the people's image of the simple elegant style, has a special status in the contemporary Chinese paintings, his characters painting became a China painting.