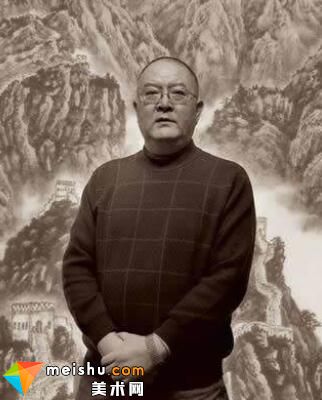 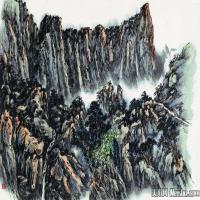 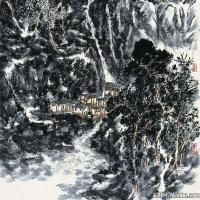 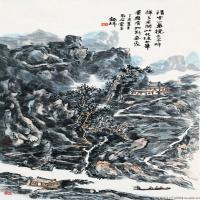 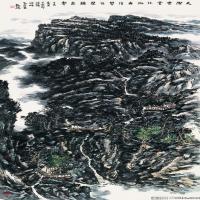 Longrui landscape, originally modeled after Li Keran, Liang Shunian and so on, pay attention to painting, but he began to love the powerful pen line color without special fondness for chapped, repeated rendering. In late 1980s, he repeatedly went to Europe and the United States of art, the concept of change, decided to "jump out of shape bound", created a number of works on, and started with the realistic landscape distance, highlighting the visual tension, become one of the representative of the landscape painting innovation. Since 1990s, he gradually to the tradition, the pursuit of spirit and taste. The process of regression change, more vigorous strokes free, masculine fusion gas shrouded picture, personality features, traditional charm and modern, but also more clear and unified.
Long Rui was born in Chengdu, studying in Beijing, South north. North and South and the comprehensive quality in his paintings can see: broad and bright weather pen is exquisite, long and tall mountain scenery vivid and pleasant, the Qi and Wu Yue Yanzhao kangkaibeige flyfox as a furnace smelting, can also be Guizhou and Sichuan mountain weather with a pot of red hook against the city street. The ink is pale thick, yet graceful but not showy doors wide open, the pattern of the transition, but subtle.
Long Rui is the basis of Arts and crafts design, so his composition, design Abstract consciousness than ordinary Chinese painters to be sensitive. Talk about "in the painting" years, "" the word became fashionable, and people to "constitute" understanding and emphasis on the plane geometry, so whether it is painting or traditional China ink, everyone in the plane "composition", all kinds of rigid geometry cut organic the images in the picture into large and small restrictions and fetters. Long Rui all his craft design foundation at this time also come in handy. But so get a few years later, he found that the brush and ink painting geometry simply some rather baffling "Qiyun enough", Long Rui with 4 words gently to the end of the game
Long Rui is not a paranoid, but a neutral quality of the integration of the painter. From a variety of performance since his debut in 80s can clearly see him fully inclusive and equitable temperament. He can be quite an important member of avant-garde "tension experiment: expressive ink painting exhibition", also is to stick to the traditional pen and ink taste "new literati painting" net objects, can also be a concept and language level is the "landscape painting" backbone. Nobody seemed to want to miss him, and he didn't want to be with anyone. When the main melody or Exhibition Commemorative occasions his work, he could draw the splendid China for a biography of great momentum, the motherland of the awe inspiring righteousness not to let people. When the little brother playing words make him appear more relaxed mood of life on the edge, he the Shu people humor can also come in handy. The current health of artists with deep hatred and resentment to the ink and wash painting in the concept and language behind the trend of the world, he also feel the responsibility on their shoulders, and planning in the private room, exposing the wall in the exhibition hall.
Long Rui is not a satisfied, rest on our laurels, he had an active thought, savvy and strong ability, broaden their horizons. In the words of critic Lang Shaojun: Long Rui is one of the few artists who is very hopeful to achieve a breakthrough. Because he has gone through a tortuous and repeated journey, the eastern and Western art as a whole have a clearer understanding, and more conscious and mature. As a powerful painter, Long Rui through the obvious achievements of creation, wordless exposition of their own ideas and values. When the development of China painting need special historical situation rallied in the profound reflection of his artistic pursuit especially suggests a quite practical example way.