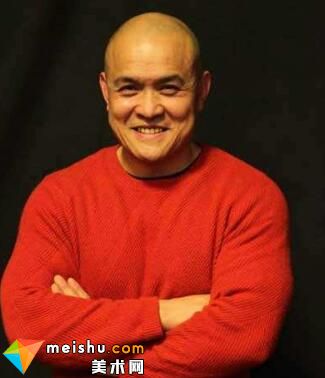 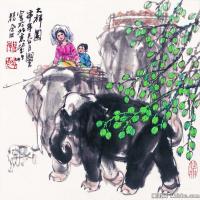 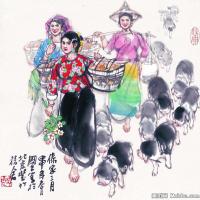 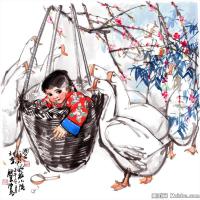 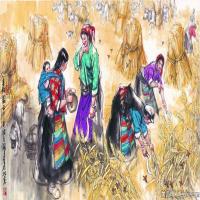 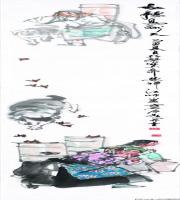 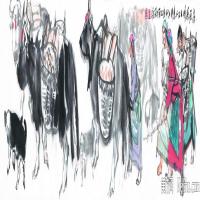 Shi Guoliang monk, so the painter had a monk, monk in a famous painter, Shi Guoliang's own words, he will later break since the end of the Qing Dynasty Xugu monk painting method with pulse. However, as a monk should ascetic, everything is empty; as a painter, should be rich in heart, to love. As a monk, how to get out of this dilemma?
From 1979 to now, Shi Guoliang has done a lot of figure painting with the theme of Tibet culture. He went to dozens of Tibetan folk songs, almost all over the Tibetan areas, he has witnessed the believers in Tibet from Sichuan to Lhasa on foot after ABA spectacular pilgrimage, once drilling tents with black grease Tibetans they ate, and herdsmen Cemayangbian gallop on the grasslands. During this period he was shocked by the broad and profound Tibetan culture, the Tibetan people have touched by the simple, pious and persevering spirit, the deep love and Tibet.
Art is the feelings of the product, as a monk, the painter, standing in the Buddhist in Shi Guoliang in the family a unique perspective on modern people's life, his writings on Tibet warm emotion, vivid brushwork with realistic and vivid, swept over the face of the mysterious veil of Tibetans they reveal, pure, kind and faithful inner world. "Pilgrims", "Tim", "prayer". A series of works to show the profound cultural heritage of western style, the formation of financial nationalism and times and distinctive character style. The "turning" in realistic realistic depiction of a dozen by the turn of the Tibetan people. The painter through the Tibetans from entering the temple at the dazed and confused manner to out of the hall when the moods, free of facial expression, depicts the psychological changes in the whole process of worship in tibetan.

predestined relationship with Buddhism
To change from the painter painting monk, is not an easy thing and.
Only a "three tan commandment", to become official monk. Ordained before they ring (waiting for the ordained men and women) training camp is more strict than life. Each person was given a number instead of their respective names. All rings for several classes, Shi Guoliang was designated as the first class class three monks. Every morning get up at 4, and only 10 minutes of housekeeping and washing time; a room (monk living room) nine people live in the bathroom only two toilet. In order not to be punished for being late in the morning, "the toilet war" was very intense.
The first class is a class, from the foot to read a Buddha, knocking up a head lying on the ground, to step on the mountain; and then read a Buddha, and then knock a head up again...... Always knock to the top of the hill, even when it rains to catch all wet to knock down. Hot summer, rings are still according to the rules in the six layer of frock, even if it does not rain, covered from the inside to the outside will be soaked with sweat. In Tibet, Shi Guoliang saw also painted a team of men and women of the Tibetan people carrying luggage shaking bell, step on a long head, straight knock to the Buddha's place. Now he has experienced, although Han Buddhism and Tibetan Buddhism which is not the same posture.
After the monastery is chanting.
Eat called "arraigned". Every meal in singing verse in Eid under the leadership of the picket master; for the men to the East, West for women, everyone put a bowl, a bowl, sit straight, eyes look ahead, unable to speak, can not look around. The first day is on the use of chopsticks, iron chopsticks for second days, this is the behavior of their silent ring training. After dinner, but also read "collective vegetarian verse".
In the early morning, usually go to the hall to listen. The afternoon classes mainly to practice the rules of Buddhism: how to prayer, how to salute...... After the evening are 11 nights. There are rules of sleep at night: face, right hand side head - such as Ga Muni Nirvana position, which also has a name called "auspicious lie", and must cover the quilt. It was so hot, rings are always midnight to get to sleep, just go to sleep, wake up the bell rang......
There are many swallows on the mountain, Shi Guoliang wrote them into the diary. "Swallow, you are migratory birds, all concentrated on our mountain. You are soon to fly back to Beijing to breed, if you see an old lady grey-haired a compound in the north of the moat, she is my mother, you give her a message, she said I want to. If only you could fly to Vancouver and see if my baby and his mother had a good time and see what they were doing......"
In accordance with the provisions of the temple, after lunch every day, relatives can see the ring. Which one of the relatives to ring, the master will study in the picket node called: "No. stay!"
Shi Guoliang knew that their loved ones and their far across the numerous hills and streams may not see themselves, and each node can be lent or secretly hoping to hear your number. Naturally, every time he had lost and lost to leave the dining hall.
Ordained the day has finally arrived.
The tonsure ceremony was held on September 27, 1996, and ordained Shi Guoliang together and from the United States, Australia, India, Hongkong, Taiwan and other countries and regions of the 141 men and women.
It was a grand law meeting.
Shi Guoliang clasped his hands kneeling on the ground. Since set a determination, he has been in a state of excitement, to the martyr's mood appreciate the courage and heroic devotion. However, the realistic monastic career completely shattered his romance and fantasy. He had realized how much he would pay for the ideal of drawing monks.
KAIJO, yellow streamers fluttering, cigarette smoke, Buddhist gongs. The clock method of bang bang, each sound let his body muscle tremor; drums "thump", each of them like a knock on his head; fahao "hum", he felt his heart broken to a piece of land.
This is a ritual he said goodbye to the world. Since then, the young professor Shi Guoliang, painter Shi Guoliang, celebrity Shi Guoliang gone, he became a monk in the Hui Zen, young team, with long qingdeng, Gufo, bell, ding.
But in this world, how much he can't break the worry!