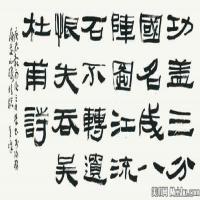 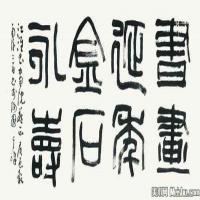 Yuan Zhao Mengtiao has a very famous "from the title superstone woodland map" poem: "the stone such as feibai wood such as Zhou, write eight bamboo should also act, if others will notice this, and had the same." This poem image specifically out of the inseparable relationship between calligraphy and painting. Ming Dong Qichang also said: "the ancients such as order (Wang Xianzhi) today, such as Mi Yuanzhang, Zhao Ziang (small) (letter Mengfu), good books can be good at painting, painting will be good books, in fact a ear." Said: "Su teacher (Huai Su) book painting, class monk Ju ran, Ju ran North Court (Dong Yuan) flow ya, vegetarian division is a (Xu) after a person also." This is an excellent idea of the calligraphy and painting. Since the Tang Dynasty Zhang Yanyuan advocated "calligraphy and painting", calligraphy and fine artists, can be said to be on behalf of many people, Mr. Sun Qifeng is a very good at painting and calligraphy artist, when we watch his books and paintings, we can feel the communion between the two and the complementary.
Mr. Sun Qifeng was also the Department of Qi, Qi Feng, the landlord is no.. 1920 born in Shandong, Zhaoyuan. He is a famous contemporary painter and art educator, besides artistic aplishmentsprehensive, painting, calligraphy and also skill intensive, the calligraphy is known.
Sun Qifeng young from art, self built training. His grandfather and father are able to write a good hand and famous village, so by the xunran. Sun Qifeng primary school, Lin Xi Yan, Zhao Kaifa, approved by teacher Mr. Hao Guoxuan, Mr. Hao is good at writing what Shaoxing matrix cursive, had no small influence to Mr. Sun, so he had more interest in calligraphy. In high school, Sun Qifeng continued his calligraphy, has been a minor celebrity, who helped to write couplets.
40s, Sun Qifeng in order to make a living, went to Beijing when the clerk. As the national cultural center of Beijing, many shop signs, from the famous book, Sun Qifeng was careful to observe the browse. At that time, some of the exhibitions held in Beijing, Mr. Sun often appeared. Painting masters gathered in Beijing, Mr. Sun became a big classroom art learning, where he not only learned a lot of nutrition, but also broaden the horizons. Post work, Mr. Sun Lian Lin Chi stop, this is already a beginning of the Han Dynasty, written on "Shi Chen monument".
In 1944, admitted to the Beijing National Art College of Chinese painting, this is a major turning point in his life, the new mileage is also an art career. The school has taught by Xu Beihong, Huang Binhong, Li Kuchan, Qin Zhongwen, Wang Youshi, Wang Shensheng, sir, they are painting and fine people. Thanks to Sun Qifeng Luo Fukan and Jin Yumin Shou masonry, sir, with their calligraphy and known. During this period, Sun Qifeng began to study in addition to the study of the Han Lishu, cursive script, the two kings (Xi Zhi & Sons, Xian) and sun Guoting's "book".
Sun Qifeng began to engage in art education from 50s, once served as the administrative work, although his business is busy, but because of the teaching relationship, not waste pond, in addition to outside, and the Han Li, cursive script, style. Sun Qifeng's calligraphy, absorb the quintessence, innovation, forming a unique style of book style, become a successful China calligraphy calligrapher in 70s, was painted the cover of the title, finally talent shows itself attracted the attention of the world.
Sun Qifeng artistic aplishmentsprehensive, painting with flowers, feathers, landscape known, calligraphy inscriptions, Xiaozhuan, official script, cursive script, the body is good, the official script, cursive, the highest attainments, division of ancient and not imitation, can enjoy the ancient and new.
Sun Qifeng was born and cursive Erwang sun sun Guoting, but did not slavishly imitate predecessors, is tied to the ancients. Sun Qifeng once said, "or as a book, where all the wonderful, there are two kings, and even Europe, sun Guoting, Liu, Yan, Zhao, Su, Huang, m, Cai, but that is not their own, not" Ecstasy "here," I have to. "". Sun Qifeng is very good grasp of the dialectical relationship between inheritance and innovation of calligraphy, his cursive book is based on previous traditions, according to their needs and the era of art itself the rule to create their own style. So Sun Qifeng's cursive book is two elegant and unconventional, sun Guoting's careful and smooth, as well as the previous program, and with a new atmosphere. Especially his cursive is bold, unconstrained bentu, never to blame for can describe.
Sun Qifeng calligraphy practice the most distinctive, Dubai and pen and vigorous charm, unique in many written script calligrapher, praised by the people. The Qing Dynasty official script and achieved a very high achievement, is another peak in Han Dynasty after the Qing Dynasty official script writing is a galaxy of talents of a few famous, zoran. Mr. Qi Gong to comment on when the script once said: "the Qing Dynasty wrote the script like Deng Shiru, He Shaoji, Yi bingshou, is not you, is a giant, write script after them, not in precision, but difficult in refined." Sun Qifeng calligraphy valuable lies in "refined", from 40s he was under the force on the sweat a lot, once wrote "Zhang Lin", "Shi Chen", "Cao Quan", "Huashan" and other famous Han Dynasty inscriptions, has reached the point of "Seiko".

Sun Qifeng is an outstanding art educator and painter in contemporary China. He is diligent, modest fame, is never tired, but to participate in the support of education, finance and other social vulnerable groups without good music. He is the Chinese art education silently diligently for 60 years, has now spanned. Although over nine years old, he is still on the desk every day to do knowledge and skills transfer, is an old professor of contemporary calligraphy and painting a rare admiration.
When it comes to Sun Qifeng's calligraphy, there seems to be no great influence on painting. In fact, he in the busy academic work and teach painting skills at the same time, never discard of calligraphy and seal cutting art, in his own words, "a minute no delay". Can seal, scribe, to grass, and every moment, familiar with the calligraphy, people will have this feeling.
See Sun Qifeng calligraphy works, you will find that not only between the lines with simplicity, but also the era of rhyme, ancient Han Qing, Frank Goldsmith's elegant and tranquil and of his own culture and social experience are all Yueranzhishang, is never tired.
Sun Qifeng Zhuanshu more features. He and the teacher Qin cardiac interventional studies on the seal, the aesthetics of painting,
Write the literati seal both old and new, both a beautiful and clever.
To watch Sun Qifeng's cursive, more memorable. His calligraphy, grass Erwang Cheng Xu, Jiyun Ming, set the master of law in a body, the rotary flexible but not floating, flying and steady point. The whole works kept quiet in the United States hidden rhythm, no anger. It also fully reflects the people often praised Sun Qifeng as a humble person.
The seal is to accommodate the Vientiane art form of ground of heart. Sun Qifeng in the teaching of drawing more than Zoudao from time to time in the case before, Qin Zhuanhan tile, imperial jade and Jane book style features can be feedback in his works.
In short, from the works of Sun Qifeng in the taste is not only the Chinese characters written testimonies, more important is that he has the spirit of the times to artistic conception. It can be said that his works are highly personalized ancient law heritage.