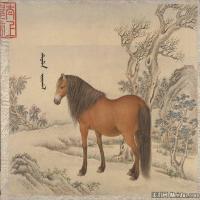 Jean-Jacques (Jean Denis Attiret, 1702-1768), Catholic Jesuit missionaries, the French, since childhood to learn painting in Lyon, after studying in Rome. Oil painting portrait. Qing Emperor Qianlong three years (1738) to China, offer "three kings to Jesus map", Qianlong was called to worship the inner court. Western painting, but not for the appreciation of the Qing emperor, after learning Chinese painting techniques, taking into account the Chinese and Western painting, do not set up a compromise between the new body, the best of the Emperor, is important. And Lang Shining, Ai Qimeng, Ande Yi collectively known as the four foreign painters, the formation of new style.
Qianlong nineteen years was ordered to Chengde Mountain Resort for the Mongolian leader of Oulut oil painting portraits, twenty-three years had made Ziguang Court martial arts figure in the "Arzur battle" map. The masterpieces of the "Ten Heroes" are in the form of "Ten Horses", which are in the form of paper and color. They are 24.2cm in length and 29.1cm in width. They are painted in the Qianlong emperor's armor. They are careful and careful in their anatomical structure. They are accurate in shape, vivid, rich in three-dimensional feeling and fur. Texture, is the possession of the National Palace Museum. Ten Horse Atlas
"Ten Horse Atlas", the paper color, the book a total of ten open, each page format 24.2cm × 29.1cm, is the only French painter Wang Zhicheng Department of famous works handed down, now hidden in the Beijing Palace Museum.
The album depicts the ten emperors of the Qianlong emperor from the Western Regions. They are Wanji, Kanhu, Monkey, Lion, Thunderbolt, Snowdrop, Horse, Benchi, Chihuahua, Yingji Cloud driving. Manipulation neatly neat, the outline of the line with the hook out, and then deposited color hidden stitching, texture and distinct. The skin of the horses is anatomical, the posture is quiet and comfortable, full of vitality, reflects the artist's understanding of horse personality and exquisite artistic expression. Each page of the landscape, tree and stone are used traditional Chinese ink painting techniques, called the Chinese and Western, as a real eternity. There are paintings on the author, "Wang Zhi-Gong Wang painted", seal white, Zhu Wenyin the party. Each page has Manchu chart questions, Qian Qing "Qianlong Appreciation", "three Xi Tang Jing Xi Xi", "too on the emperor", "Bao Ji re-edited" and India.
Wang Zhicheng (1702-1768), a Frenchman, a Catholic Jesuit missionary. Lyon since childhood, after studying in Rome, working oil portrait portraits. Qianlong three years (AD 1738) to China, dedicated to the inner court, buried in Beijing after the death of the French missionary cemetery, and Lang Shining, Ai Qimeng, Ande Yi collectively four ocean painter, the formation of new style. His handed down works are "three weeks of Jesus Christ", the drafting of the copperplate group painting "Qianlong Pingbian quasi-Ministry of the Ministry of war plans" part of the draft and so on.

[Name] Qing Wang Zhicheng million tree garden gift chart
[] Qing Dynasty
【Introduction】 silk, 221.2 cm vertical, horizontal 419.6 cm. National Palace Museum.
The contents of the painting reflect the 1754 Qianlong in the Mountain Resort million trees received three Ling Ling spectacular scenes. Desert Mongolia in the late Ming called E Rute, sub-Junggar, Heshuo, Duerbote and Tuerhute four. Junggar in the four forces in the most powerful. Ten years of Qianlong (1745), the Junggar aristocracy started the struggle for the sweat bit. Duerbet was also forced to participate in this scuffle, eighteen years of Qianlong (1753), Dawazi won the Junggar Khan husband after the troops, in the struggle to seize power in the sidelines of the Duerbote retaliation , At the moment of tribal peril, the Minister Cailing Lingji, Chelingbaibashi, policy Ling Meng Mongolian Duerbote in the leader of the "three-car Ling" (car Ling, car Lingbashi, car Ling Meng And led to the reign of Emperor Qianlong (nineteen years). Qianlong very pleased to hear the news, attaches great importance to help a large number of livestock food, to solve the Duerbote tribal life difficulties, and the establishment of flag points.
The following year the creation of this map, depicting the Qianlong Emperor in Chengde Mountain Resort million trees park hosted a banquet "three cars Ling" and others. The atmosphere was solemn and solemn, the Emperor Qianlong sitting on the step chariot slowly into the banquet venue, met with the Duerbote ministry chiefs and civil and military officials in the next kneeling. Emperor Qianlong of the emperor were able to canonize their titles for the Prince, the king, Baylor, shells and title, and reward gold and silver handicrafts, jade, porcelain 'silk and other objects. Because of the painting, the silk is falling off, and the painter can no longer point to it. However, from the records of paintings and archives, Lang Shining, Wang Zhicheng and some Chinese painters took part in the drawing work. The real painting, to collect material, which lasted a year to complete. After the completion of the frame is also suspended in the Chengde Mountain Resort A Shengjing inside the hall, and the equestrian figure relative, a dynamic one. In the composition also has a new breakthrough and creation. The two Qianlong emperors in the picture, not in the middle of the frame, but rather aside, the submission of the Mongolian leader but living in the center of the screen, we can see the Emperor Qianlong to their return to the attention; In addition, the painter in these works, and Not to rely on the image of the emperor to draw more than others, the body is more burly, in order to highlight his distinguished position, the size of the Qianlong Emperor image of the basic and others, as with the Chinese image of the emperor had painted Far greater than the practice of people have a very obvious difference.