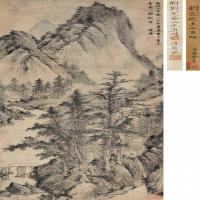 Liu Jue (1410-1472) word Tingmei, No. End Temple, South Zhili Suzhou Changzhou (now Jiangsu Suzhou) people. Xuande, the Suzhou Prefectural situation Zhongju as officials, not to, have to make a living, orthodox three years (1438) in the Juren, granted the Ministry of Punishments principal, Qian Jixian Qian Qian, fifty years. Death year sixty-three.
Old and learning is not bad, as the poem can be chanting, Jingtai, Tianshun, the poet of the most Wu, the capital of Liu eight sentences. Book is, line out Zhao Meng, landscape out of Wang Meng, line grass learning Li Yong, the extremely wonderful. Write landscape Lin Guquan deep, stone chaos wood show, Yunshengmianmi, Youmei Merry, Ai Ran high, climbing scales Giant old, Shu or Shengtang, especially not into the room ear. Tianshun (1457-1464) and Du Qiong, Xu Youzhen, Ma Yu, Shen Zhenji, Heng Ji and able to write landscape, modern times.
Liu Jue [jué] official Qing Dynasty, Zhejiang Fu Tianxian Cheng Du Fu misappropriation of fishing taxes, the defendant to "gold two hundred and two" commissioned relatives to bribe him, he is worried about the lack of evidence, as a breakthrough, identified the tax The truth of being misappropriated. Wuxi has a corrupt due to bribery incident, the Trustee sent 500 two silver, begged him to handle the case to intercede. Liu Jue Yan refused, and come to say: "not urgent to go, when the news of the official!"
Liu Tingmei for the Ministry of Punishment, the main residence of the capital, and Xu Wugong, Liu original Bo for the poet of the public, each phase, will talk about Dan. Taste the old addition to the original Bo invited the Shou-year, Tingmei because of possession of the possession of the doors of the portrait problem, the original Bo was a pen on the pen. Mingdan to return, the county of Zhongtang. The capital of every Zhengdan, the owner is out of the He, but set the white book and pen to study in a few, to the guest, the book name, no greetings also. Is Japan to strike, Liu Dingzhi, Huang Tingchen two Bachelor's first, see this poem, the excerpts of a leaf to go. Zhaishi who followed, are excerpts of the. All the time, the book has done. Tingmei late back, cable book to read the guests to report to the newspaper, the family told it. Tomorrow, the restoration of a book, is also the case. Zhongshu Scheeren Jin Jinqing play that Tingmei said: "This is the consumption of paper ghosts Zhong Kui also." Moment of the capital as a miracle. The original poem reads: "long sky paste cloud night wind, grievances in groups of crazy ghost." Did not mention the three feet of the Yellow River water, blood spilled lotus dance autumn water.Flying fire negative fire shame in the moon, oak silhouetted black crooked owl. How to forget the hand, then look back to the East and white. "" How to do it, "he said," I do not know how to do it.
Liu Wanan thin in the Shihuan, fifty years then the solution group, when a constitutional minister cable title "cattle map", as the poem reads: "Shepherd drive cattle to fly if the wind and rain without rain similar to the wind. , The number of cattle who did not return. "Constitutional also feel weep hanging crown. Chenghua Xing Gong Yu for Su Shou, Mei Hua to ask questions, Tingmei Fu Jue sentence: "The cold meet in the horizon, jade pearl with Revlon. Kill kill mysterious mad priests, China? "Xing public poetry was very happy. After Xing Gong to the county for a long time, Pei Dang from the tax, the people are quite resentment, who cast the poem of the thorn who said: "the amount of Yamada and paddy fields, leaving only the sea and blue sky.If the boat if the zhouzhouzhu, Sleep. "Xing heard the public, that Tingmei made, title of the. Or persuade to white, Tingmei said: "Peter Nepalese what I?" After Tingmei death, Xing public hanging festival are not to, many non-people.