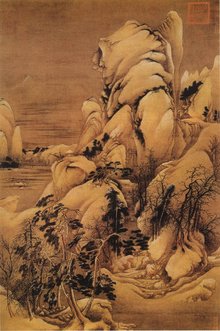 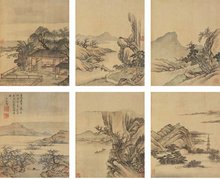 Painters of the Northern Song Dynasty. The year of birth and death is unknown, and it was active in the middle of the Northern Song Dynasty (about 970-1052 A.D.). Chang'an (now Xi'an, Shaanxi Province) is a native. Write more about trees, wild water, Qiujiang, snow scenery, cold forest, fishing pools, and embellish travel, wild ferry, fishing and other characters, simple writing, steep peaks, strong trees. There are "Qiujiang Fishing Boat Map", "Guanshan Mixue Snow Map" and "Qiushan Xiaosi Map" handed down.

Early in Bianjing (now Kaifeng, Henan Province) to sell medicine for a living, drawing to attract customers, along with medicine to send paintings, gradually named, Gongqing scholar-bureaucrats rushed to postpone the invitation. Xu is good at painting trees, remote and wild water. In his later years, his brushwork is simple and fast. The trees he painted are steep and hard. In the Song Dynasty, Duke Deng Zhang Shixun wrote poems to Xu: "Li Cheng Xie Shi Fan Kuan died, only Chang'an Xu Daoling. "It is considered to be the first landscape painter after Li Cheng and Fan Kuan. Mifu and Huang Tingjian and others highly appreciate his paintings. Xu Daoling is bold and unrestrained. He is known as "drunk Xu". Huang Tingjian once described Xu Daoling's paintings in his poem "Answering Wang Daoji Monastery Chancellor's View of Xu Daoling's Landscape Map": "In the past, Xu Daoling used to be drunk in Chang'an, Manxi Inkstone to grind pine smoke. Suddenly call silk to turn inkstone water, long time no pen or years. When I step on the door and break into the white head, I wear a scarf and a crown and lean to drink more wine. Lift a cup to turn over the basin, lie down empty, that is, 89. Drunk pick up withered pen and ink, like landslides keep on. It's thousands of miles away. Everything in the hall is cold and desolate. "It shows that his painting skills are superb.

The handed down work "Qiujiang Fishing Boat Picture" (also known as "Fishing Boat Singing Evening Picture" or "Fisherman Picture") is one of Xu Daoning's representative works. It is silk, light colored, and paints a number of fishing boats on the open river under the mountains and distant peaks. Shanfa is a long skull swept down by scorching ink and thick ink. It draws cliffs as steep as a screen, showing the steep elevation of peaks. Its mountain situation and tortuous rivers increase the change of composition. It draws trees with big brushes, thick brushes, unsmooth trunks, sparrow claws, and only dots leaves with ink. Its brushwork is bold and vigorous; distant trees use thick ink for long strips, few branches and leaves, not long or short. First, these paintings are different from Li Cheng and Fan Guang, reflecting Xu's characteristic of wild style.