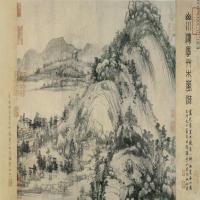 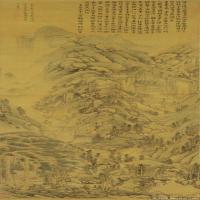 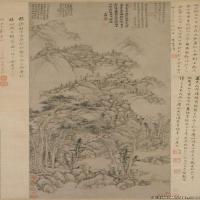 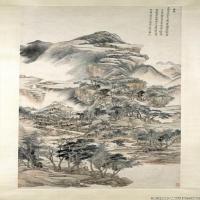 Huang Gongwang is the famous Quanzhen faction Taoist, painter. The word child for a long time, the number of a peak Taoist, and No. Daudi Taoist, Pingjiang Changshu (now Suzhou, Changshu City) people. (Now Zhejiang Wenzhou City) Pingyang County (now Cangnan County) Huang for the child, due to change the surname Huang, fame, the word child for a long time, the name of the family, The landscape painting of Dong Yuan, Ju Ran, which germinal, own a grid; a shallow landscape, style, show, simple, bright, great influence on the Ming and Qing Dynasties landscape painting, "Yuan four" , Wang Meng, Ni Zan) the first. Yuan to Yuan (1335 ~ 1340 years), the western Zhejiang Lian Xu Ying into a book clerk, was falsely imprisoned, after the release of Jin Shiyan rock into the whole truth. Once abbot Wanshou Palace, mention the point of Kaiyuan. After the Songjiang, Hangzhou and other places, selling Bu for a living. He lived in Hangzhou, Shau Kei-chuen, died at the age of 86. "Dao possession" income Jinyue Yan, Huang Gongwang "Mr. Zhou Zhou Zhi Zheng Zhi" roll, "hold a letter of three tips" a volume, elaborate the theory and power law.
Once had to sell Bu for a living. After participating in the idea of ​​Confucianism, Buddhism, Taoism, the unity of the three religions, more see through the Red. Due to long-term traces of mountains and rivers, rivers and mountains began to interest. In order to enjoy the charm of mountains and rivers, he lives in Changshu Yushan, the frequent observation of the twilight of Yushan change the wonderful scenery, in the heart, transported to the pen. Some of his landscape painting material, come from these mountains wins. He lived in Songjiang, the observation of the landscape is to the point of great joy, sometimes sit in the mountains all day, sleepless nights. Fuchun River in his home, the body is always with a bladder, built-in painting, each see the mountain scenery, will take a show of paper, copy down. Fuchunjiang North has Daling Shan, public life in his later years had to live here, he Daling Shan as a teacher, who has painted "Fuchun big ridge map." Paper, ink, vertical 33 cm, horizontal 636.9 cm, began writing in the positive seven years (1347), intermittent, after several years, to positive decade, he was 83 years old, Not yet finalized. This figure depicts the early autumn scenery of the Fuchun River, slope Tuo ups and downs, Lin Luan Shenxiu, ink Fenpi, vast simplicity, is the society at that time there are more than 10 copies. Before this, but has been burned two paragraphs (later named "left mountain map" and "useless volume"). Now "useless volume" hidden in the Taipei National Palace Museum, "left mountain map" hidden in the Zhejiang Museum.
But also learned Jing, Guan, Li Dongyuan was not as well known fame Jing, Guan, Lee's fame, so we all stressed that he Jing, Guan, Lee's side. He stressed that both self-learning, but also often referred to Jing, Guan, Lee, I am afraid there is also the meaning of fashion trends. Later theorists only said that he was learning, but according to what they see Huang Gongwang painting the actual statement, it touches more practical.
Huang Gongwang had done Xiaoli, due to involvement in jail, after his release from the seclusion of rivers and lakes, Taoism Quanzhen. After the age of 50, began painting landscape, Zhao Mengfu, Dong Yuan, Ju Ran, Jing Hao, Guan Tong, Li Cheng and so on, in his later years changed his law, into a self-made, good poetry, Sanqu, quite successful. The painting focus on the division of good fortune, often carrying pen and paper depicting Yushan, three, Jiufeng, Fuchun River and other places of natural beauty. Calligraphy in the Cao Zhou brushwork into the painting, ink, light purple two faces, ink Jane far Yi Ma, style vigorous Gao Kuang, the momentum of the show.
Huang Gongwang whether it was originally Luzi, remaining doubt. Most of the works between the Yuan and Ming did not Lushi Zi said, including the Ming Yuan Zhong Sicheng "recorded ghost book", only the end of the Ming Dynasty Huangyan Tao Zongyi book "stop farming record" Lu Xing surname following Huang said.
"Fuchun mountain map", "Fuchun big ridge map", "creek rain intentions", "fast snow when the sunny map", "Jiufeng snow map", "Dan Yushu map", "Tianchi Stone wall map "," nine Everest Cuigu "," Shuiguqingqing map "," Dongting Qifeng map "and so on.