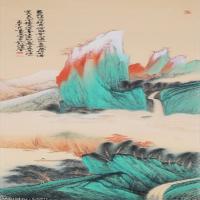 Mr. Ma Xiaotian, a well-known Chinese painter and cultural scholar, is also known as Xiangtian. He is the master of Chenghuai Tang. He has been taught and influenced by Wu Yueshi, Liang Huanghuang, Huang Yongyu, Huang Miaozi and other predecessors all the year round. In 2007, he served as Rong Baozhai's consultant. Now he is a member of the Chinese Culture Promotion Association, a member of the Chinese Painting Research Association, a specially appointed academician of the Zhongguang Academy of Calligraphy and Painting, an academician of the Chinese Workers'Academy of Painting, an asset management planner of the Ministry of Culture, and a recommended painter by Rong Baozhai.

Ma Xiaotian, also known as Xiangtian, is the owner of Chenghuai Tang. Beijing native, born in 1962, began to study traditional Chinese painting at the age of 16. At the age of 19, he participated in national art, calligraphy and photography exhibitions and won prizes. Since then, he has been engaged in the research and discussion of traditional Chinese painting and calligraphy art for many years, and his works have been published by the national media for many times. Professionally, he has been taught and influenced by Wu Yueshi, Liang Huanghuang, Huang Yongyu, Huang Miaozi and other predecessors all the year round. In 2007, he served as a consultant of Rong Baozhai. In recent years, his painting style has been deeply influenced by Mr. Zhang Daqian. Now he is a member of the Chinese Culture Promotion Association, a member of the Chinese Painting Research Association, a specially appointed academician of the Zhongguang Academy of Calligraphy and Painting, an academician of the Chinese Workers'Academy of Painting, an asset management planner of the Ministry of Culture, and a recommended painter by Rong Baozhai.

Yu has also been friends with contemporary masters He Ying Haixia, Liang Huangqi, Huang Miaozi, Huang Yongyu and other old people who have forgotten their age. By virtue of close learning, he has begged for some small carving tricks and is proud of painting and tiger tricks. In order to prove the Six Facts again, the model was transferred and written in Zhujia Teachers'College. As a result of long entrusted by painting, dedication, poverty and tradition, advocate self-reliance, self-advocate the revival of the "Six Ways", with its criteria to wander and express their own feelings freely. Self-praised "Chenghuai Hall Master", compiled the right inscription: "Exploring philosophical theory and looking at the world outlook Chenghuai". Because of advocating Wei and Jin demeanor and keeping one's mind, he also practiced the skill of "borrowing teachers to return one's soul" with "the enterprising heart of the madman".

Just as Huang Gong Miaozi wrote poems for Mr. Yongyu: "Lao Tzu's chest is empty of dregs, and half of the mountains are floating clouds." Without the trend of "unloading clothes and trays", it is difficult to get rid of the dregs in the chest, the secular decay, and the elegance of books. That is to say, he should study and draw historical classics and models of his predecessors carefully, sticking to the past and not sticking to the past. For the painter should be free and straightforward nature, do not stick to the different sects, learn from all the long-standing expression of the thorax, if you can cultivate excellent painting skills, you can enter the hall and enter the road.

Hello, Xiaotian. Paintings and letters have been received. They all like it. What about three or thirty years of scholarly farewell? Although few contacts, but you and I are not weak friendship, at least enough to write something! The reason why I finally wanted to plead guilty was not that your paintings were not good, but that I had no idea about painting. Previously, I said that other people's paintings are also reluctant to make it difficult. After that, I feel very guilty. Always afraid of jokes. Acquaintance with today, I only think that you in painting and calligraphy, it seems that you have never changed love, attention, I am afraid in private never give up the exercise, knowledge is broad, accumulated and thick, from extraordinary, read, there is a kind of ambiguous atmosphere of everyone! As an old friend, I really envy you! I really don't know what else to say besides this.

Xiaotian is intelligent and eager to learn. He has been a good swimmer among the old ladies in the capital city, and has never heard of any magic tricks. Learning from me in 1984, he studied pen and ink carefully, dredged six methods of evidence, and for a time was Junyan in Beijing. Afterwards, he floated in the sea of commerce, though not forgetting the youth, but also sparse for a long time. Nowadays, when we pick up our pen and prove our style, we have gained more benefits from years of experience, and the wealth of insight is no longer what it used to be. In recent years, intensive study of shaven Weng Miaobi can be said to be extremely specialized, lasting rhyme. Xiaotian collects and publishes, so it's in a brief order.

The Sense of Teacher's Method-Ma Xiaotian I Know

Ma Xiaotian, a Beijing painter, is not the kind of painter who has "organized" and "background". He has not only worked without a certificate, nor participated in any small exhibitions organized by county, Township and village organizations, let alone provincial and national exhibitions, nor won any medals, but he is not a seedling cultivated in a big shed. He is a big tree growing naturally in the wilderness! In that case, I will take this opportunity to water the tree with a few ladles of water.

I have known Xiaotian for several years, and I was touched by his calligraphy works on the jade wall of many friends in the field of calligraphy and painting in Beijing before we met. Later, we had the pleasure of meeting each other. It was only after we met that he not only wrote well in calligraphy, but also painted very well. Xiaotian has a cheerful personality and has extensive exchanges with many contemporary artists. It is said that he has a good eye for art. Especially, they have their own unique views on art theory. And formed its own unique artistic point of view.