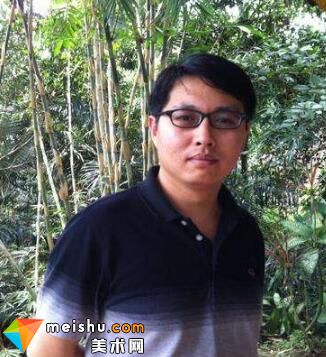 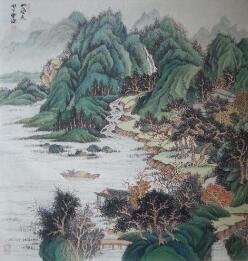 In 1998, he was awarded a scholarship by Wang Kechangte of Tianjin.

In 1999, sketches were collected by the Art Museum of Tianjin Academy of Fine Arts.

In 2008, he participated in the first "New Forces of Ink and Wash" National Youth Academic Nomination Exhibition of Chinese Painting.

In 2014, he participated in the Art Exhibition of the 2014 Nanjing Youth Olympic Games and the APEC Red Pavilion Painting Exhibition.

In 2015, he participated in the "Teacher's Inner Creation - National Landscape Painting Teaching Seminar and Selected Exhibition of Teaching Courses" in art colleges and universities. His work "Linquan Qingyin" was permanently collected by Tianjin Art Museum.

The most valuable thing about landscape painting is its artistic conception.

Huo Chunyang: Landscape painting is precious in artistic conception, which means "thinking" and "imagery". It is wonderful to achieve "thinking and imagery". Reading Wei Yunfei's works, we can deeply understand his pursuit and yearning. Wei Yunfei graduated from the Department of Traditional Chinese Painting of Tianjin Academy of Fine Arts and stayed at the university after obtaining his master's degree. Through long-term study, he has laid a solid foundation in painting, and indulged in the study of philosophy, aesthetics, painting history and painting theory. It is precisely because of the nourishment of these traditional cultures that his works have a profound and meaningful meaning.

Ancient Chinese philosophers believed that all things in the world were born of the "Tao", which is real but elusive. Ancient landscapes were pursued by expressing the "Tao". Tao is Qi. Wei Yunfei's paintings reveal a kind of quiet spirit. There are no mountain boulders, no swords pulling and crossing trees, and no rushing into the sea. The only rivers in Huixi are clear mountains, clear forests and autumn nights, clear waterfalls on Huixi River, clouds and smoke on the riverside, fishing houses in water villages, full of plain and quiet atmosphere, which seems to communicate with all things in the world.

Chinese painting is based on brush and ink. Brush and ink not only reflects the traditional skills of the painter, but also reflects his accomplishment, sentiment and character more clearly. Wei Yunfei's brushwork is simple, modest, or elegant and vigorous. He paints different artistic conceptions in appropriate places. With elegance, light and ethereal, the virtual and the real are intertwined, the style is not vulgar, and has a profound ancient meaning. He painted many series of nostalgic landscapes. The layout of the pictures was smooth. He absorbed the tradition and integrated his own artistic feelings. He wrote about the hills and valleys in his chest with the help of ancient brushes and ink, thus creating an ideal place for traveling and living.

From his works of different periods, we can see the process of his continuous growth and progress. In such an impetuous age, everyone is seeking for differences and surprises, but Xiaowei still insists on taking his own path, learning from the ancients, going deep into life, not publicizing anything. This mentality is highly commendable. He has made great achievements, and I believe he will make great achievements in his own way.

His works were selected into the 11th National Art Exhibition and won the bronze prize of Tianjin Exhibition Area. The 7th Youth Art Exhibition of Tianjin was awarded the gold prize. He was named "the most potential collector of the 70s and 20s" and "the top 50 most influential contemporary Chinese painters".