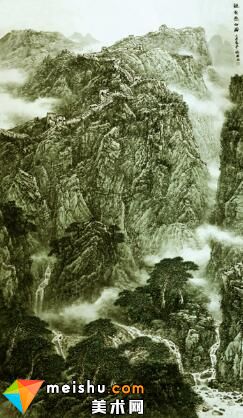 In 1997, he created a giant Great Wall "Yanshan Pinnacle" for Huangyuan Hotel.

In 1998, he created a large number of works for the Beijing Municipal Government, such as Lijiang River Rain, Great Wall, Huangshan, Xiangxi and so on.

In 1998, in celebration of the first anniversary of Hong Kong's return, the Ministry of Culture organized 10 painters to create giant landscapes. President Jiang Zemin inscribed the painting "Splendid China" and presented it to the HKSAR Government.

In 1999, in order to welcome the return of Macau, the Beijing Association of Fine Arts created a huge volume of the Yangtze River, for which President Jiang Zemin wrote "Jiangshan Wanli Tu" and presented it to the Macau SAR Government. It took one year to create this volume. He served as a member of the Creation Committee and a principal creator. This volume won the Beijing Literature and Art Award.

In 1999, he created a huge Lijiang River for the eighty-first building of the Central Military Commission, for which Mr. Liang Shunian painted the title "The Beautiful Lijiang River".

In 2002, Miao Chong'an, a famous painter, created a huge painting "Spring Tide in the West" for the central hall of Jingxi Hotel.

In 2002, he created a huge picture of the Three Gorges for the Beijing West Hotel.

In 2003, he created Qiandong Style for the Great Hall of the People.

In 2005, he created a huge picture of the Great Wall for the Chinese Embassy in Thailand.

In 2006, he created a huge "Lijiang River Scenic Spot Map" for the Chinese Embassy in Egypt.

In 2006, the State Council of the South China Sea created a huge Huangshan "Jiangshan Scenic Spot".

In 2006, he created a magnificent picture of mountains and rivers for the eighty-first building of the Central Military Commission.

In 1990, the Central News Film Printing Factory filmed The Country of Young Painters, and in 1996, CCTV filmed the special film "Landscape Painter Cheng Zhenguo". He has published many works such as Cheng Zhenguo Painting Collection.

Cheng Zhenguo's aesthetic, healthy and pleasant purpose embodied in his unique artistic expression is finally accomplished by writing in ink.

The point, line and surface in his paintings are based on the idea of a certain artistic composition, which transforms the skeletal techniques in writing into different writing styles such as center, side and scattered front, interlacing and interlacing with some beautiful strokes such as turning point, setback, pressing point, weight, urgency, clumsiness and astringency, and weaving them into a living image, and then weaving them into a living image. With emotional dots and lines, artistic conception is materialized into ink images, and Jiner combines them into vivid pictures. In this way, he not only expresses his humanistic feelings, but also supports the thinking principles of his painting formation. In his paintings, as the supporting line of the object, it appears round and thick, such as the twisting of a curved iron plate, showing a magnificent strength, emitting a spiritual light. The chainsaw lines used to delineate the Yin and Yang faces of objects are flexible, long or short, thick or thin, or stretched to a straight line, or condensed to a sudden stop. The changes in strength and direction of these lines are carried out in a highly unified form and content, in accordance with the requirements of the representation of objects and images, without redundancy or shortcomings. Natural, such as popular water, naturally into lines (text). This kind of brush makes the texture of Zhongshan Stone delicate and complex. It not only adds the connotation of the picture and the value of appreciation, but also integrates its rich emotions. From the technical point of view, the graceful texture and concise outline of mountains and stones have formed a sharp contrast. Complexity and simplicity complement each other, which not only reflects the wonderful use of brushes, but also increases the interest of painting.

It can be seen from his pen that after a long period of tempering, he has found a formal language beyond the general imagination, thus approaching the perfection of the content to be expressed. He was talking about himself.

In the form of visual aesthetics, the line is the necessary means to emphasize the contour of the image form, and then to strengthen the level of the object. According to the change of the object form, the line or left or right vertical or horizontal is organized, emphasizing its sense of volume, space and rhythm. The lines in Chinese painting are not aimlessly combined and arranged. They not only carry the recombination and Re-recognition of the natural form, but also contain the rich imagination and emotional input of the painter, fully embodying the appeal of the connotation of "using pen in bone method, responding to object and image". (See Cheng Zhenguo Wen's Landscape Painting Creation Commentary). It can be seen from this that his pen is not twisted by his hands, but freely sprinkled under certain laws.

In Cheng Zhenguo's paintings, the texture is reflected in the use of brushes, while the ink in the picture is vivid and moist.

In the process of painting, according to the different orientations of the aesthetics of objects and images, he used the methods of dipping ink, breaking ink, accumulating ink and splashing ink to make the wet and dry show different shapes, strength and momentum, which are influenced by the emotions in the process of painting, but also restricted by the laws. Make the spirit born in the pen, full of pictures. So as to achieve the purpose of drawing rivers and mountains and pleasing people's minds. He used ink without a fixed program, relying solely on the perceptual grasp of the object of expression, which is abstract. As he himself thought, "Make the image in the painting different from the image of nature,... The use of ink to create a strong, dry and wet char, in line with the visual atmosphere, in fact, the use of abstract processes to complete. (See Cheng Zhenguo Wen's An Analysis of Landscape Painting Creation).

Cheng Zhenguo's artistic achievements are remarkable and have attracted the attention of the painting circle. Hanging in the Great Hall of the People, the Central Office, the Beijing West Hotel, CCTV, the State Council, the 81st Building of the Central Military Commission and the embassies of China abroad, the Chinese and foreign readers have received a lot of praise, which not only shows his extraordinary artistic talent, represents the artistic status of his paintings, but also for the country. To win glory shows the infinite charm of Chinese painting art, an ancient historical culture.

Cheng Zhenguo's achievements in painting art are first of all due to his profound understanding and inheritance of tradition.

He is not only addicted to tradition, but also has a unique understanding of tradition. He believed that "tradition should be the motive force of artistic creation". "The return of art to tradition is not a retrogression, but a progress and development. Therefore, Chinese painting is not unchanged, nor unchanged, its change never at the expense of denying its own tradition. "This voice represents the correct understanding of the tradition of contemporary people. It represents a kind of ambition to carry forward the national spirit. It is because of such foresight that he has devoted himself to tradition for decades, striving diligently to absorb nutrition from tradition, to dialogue with the ancients in tradition, and to seek inspiration for his artistic language. Therefore, although his paintings are unique, they do not deviate from the main road of Chinese traditional culture. It is a new branch that thrives on the root vein of the traditional old tree, and it is the result of the traditional spirit and individualized creation.

Although Cheng Zhenguo emphasizes tradition, he advocates to extract the cream from other cultures. He faced up to the cultural collision under the coexistence of multi-cultures and multi-artistic forms, and found a new integration point under the concept of harmony between the law of self-development and contemporary human environment. Therefore, his paintings take in foreign elements and decompose them into their own language, enriching their own painting programs and techniques of expression.

In his artistic creation, Cheng Zhenguo extended his hand to tradition and life. He used his teacher-made life experience to constantly purify and refine his pen and ink language. He believed that "the study of previous knowledge is only limited in the aspect of paintings. We must explore the way of thinking from the excessive to the deep consciousness, and derive how to use modern people's consciousness to think in accordance with the artistic language of today's era." Standing at this altitude, we can understand nature again, and from it we can realize endless spiritual schemas. It was in the process of entering nature that he saw the great rivers and mountains of his motherland, either magnificent and broad-minded, or quiet, or steep and steep, or ethereal. In the aesthetic form of natural presentation, we can experience the artistic conception and mood of creation, carefully understand the cultural connotation contained in it, and think about how to express it vividly and vividly with the unique brush and ink form of Chinese painting.

The creation of art originates from life. His observation of natural objects finds a more humane element from a different angle of view, from which he gains a sense of the beauty of nature. In the course of learning from nature, he cultivated his personal feelings. In the dialogue with nature, he felt that the magnificent image and magnificent mind of mountains and rivers spoke for himself, and he also had a strong sense of responsibility to speak for mountains and rivers. After a period of pursuit and exploration, the beautification of nature, which is haunted by one's own soul, is transformed into an image of pen and ink higher than nature, from which one can realize the reason of creation. Then, this kind of feeling is extended to the establishment of style, making it a natural outpouring of thick accumulation and thin hair, and a natural result.

Cheng Zhenguo's exploration of painting art is not only reflected in his thorough understanding of tradition and mastery of art, but also in his efforts to draw nourishment from the sister art of painting. He strives to seek the influence of poetry, calligraphy and opera on the artistic conception, shape and rhythm of painting. He not only considers it theoretically. And explore, and constantly speculate from the reality. He often has this kind of experience in inscriptions and postscripts. Reading it, we can see that he explores deeply and extensively. For example, his exposition of the relationship between poetry and painting has many interesting words. For example, "Poetry is the use of abstract words to represent the meaning, through the organic combination of beginning, inheritance, transformation, harmony, level, rhythm to shape the image; painting is the use of ink to shape the shape of the schema to achieve its purpose". "Both of them have the function of `loving and distant thoughts, such as seeing a foreign land'." It can be seen from this that he compares the writing techniques of poetry and painting and finds the similarities between them, which is seldom seen in today's painting world. He paints with infinite interest to create a hill in his chest. The artistic conception of the works is full of poetry and intriguing, originally due to this. The rhythm of his paintings should be influenced and enlightened by the rhythm.