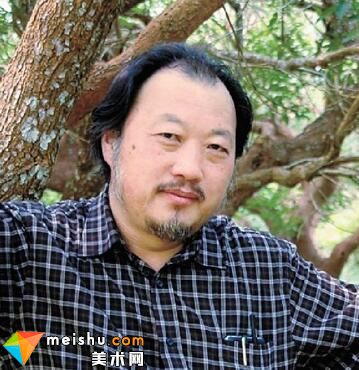 Lu Dong, born in Tai'an, Shandong Province in 1961, is good at Chinese painting. He graduated from the Department of fine arts of Shandong Taian Normal College (now Taishan College) in 1983. From 1996 to 1998, he studied in the assistant class of the Department of traditional Chinese painting of Tianjin Academy of fine arts. In 1997, he began to create a series of works with lotus pond as the theme. He used to be a senior teacher in Xintai City, Shandong Province. Now he is a member of China Artists Association and associate professor of Art Department of Taishan University. His work "autumn pond impression" won the bronze award of "Zhongheng Cup" national painting and calligraphy exhibition, his random thoughts of lotus pond was selected into the 9th National Art Exhibition, and his autumn color Fu won the excellent award of "99 Macao return to Chinese painting and photography exhibition". Lotus pond imprint is collected by China Art Museum. In recent years, he has created a series of works with lotus pond as the theme, winning awards in the National Art Exhibition for many times, and his works have been selected into the "nine national art exhibitions". He has won the gold medal of the government's high award in the "Eighth National Group Star Award" art works exhibition of the Ministry of culture. "The fifth national fine brushwork Exhibition" won the silver award, and won the "Zhongheng Cup" national art exhibition, the "new century National Painting Exhibition" and the "Western glory" national Chinese painting Nomination Exhibition, and won the Bronze Award three times. The works are collected by China Art Museum, CCTV, Lingnan Art Publishing House and other professional collection institutions. Shandong TV's "art of the times" special report.

The lotus pond painted by Ludong has profound artistic conception, gorgeous and profound colors, rich and integrated images, both broad and subtle. There are not only incisive splashing colors, but also meticulous depiction of the painting. There are all kinds of things, and it is endless. People suddenly sigh that the lotus pond is big and the world is small. Ludong read the spirit of the lotus pond, so the multi-minded emotions can be easily integrated into one side of the pond. The order of the four seasons of the lotus pond, thousands of weather, and the whole realm.

The lotus is a very cultural plant in China. The ancients thought that the lotus has the quality of a gentleman. Especially in the eyes of scholars, the quality of the lotus is also clear, and the quality of the lotus is also high. It can burn the spirit of heaven and earth, and bring the lotus as the quality of a gentleman. In the shadow of a dream, Zhang Chao said: "most of the charming flowers and colors are not very fragrant, and most of the thousands of petals are not solid. What's more, it's hard for all talents. If it's both, it's only lotus. " The image of the lotus is almost perfect. In writing lotus, the ancients mostly abstracted their character, wrote and wrote freely, reached a pure and free place, and understood it, while Ludong pushed it from the scholars' pure offering to the deep nature, and the beautiful and quiet ecology of lotus pond was emphasized and magnified.

Lu Dong's writing of lotus is good at creating environment. He strengthened the atmosphere with new expression techniques, displayed the colorful, mysterious and peaceful atmosphere of lotus pond, and formed an artistic character with unique aesthetic value. Ludong's lotus pond has formed a very unique personal schema, which has a perfect system of ink and color expression. The color and composition are obviously nourished by oil painting. The lines of lotus and the modeling of birds can also see the traces of traditional meticulous painting. The overall atmosphere of the picture is full of Oriental sentiment. His painting has a great distance from the traditional fine brushwork mood. With rich performance skills, he has created a deep, colorful, thick and spiritual lotus pond new environment. The exploration and innovation of art mostly come from the needs of artists' expression, and Ludong's artistic innovation also comes from the observation and perception of the real lotus pond, which is the capture and pursuit of a kind of spiritual feeling. Therefore, his expression system is open, from the heart, and therefore has the basis of continuous development.

Lu Dong's painting interest is more gloomy. What he expresses is a kind of thinking in autumn. Although he occasionally has warm feelings, the overall tone is the bleakness after the gorgeous, the bleakness in the dusk. In fact, this kind of thinking in autumn is a kind of thinking about life, and it is an image inquiry about the ultimate meaning of life. In such inquiry, the painter's spirit and temperament are presented incisively and vividly. Although the artistic appearance is different from that of the ancients, in terms of aesthetic pursuit, Ludong is similar to the traditional Chinese literati. The aesthetic tendency of the traditional Chinese literati generally tends to be simple, desolate and indifferent, which is also a kind of beauty of late autumn. Ludong's thinking of autumn is more passionate. Facing the late autumn, he does not go to emptiness and nothingness, but to a kind of complex "Yes". The desolation in the splendor can touch the heartstrings of the contemporary people.

Chinese flower and bird painting has shown an obvious trend of diversification in contemporary times. Lu Dong's thinking and creation are also the result of this trend. Painters either innovate in concept, or create in technique, or return to tradition, all reflect the state of multiple symbiosis of Chinese painting. In the diversified pursuit of art, the painter's emotional and ideological accumulation should always be the basis of innovation, and the era value of art is determined by this. Ludong's paintings are broad and gorgeous with unique personality, which undoubtedly contributes to the contemporary exploration of Chinese flower and bird paintings.

Ludong lived under taidai for many years, and was raised by the spirit of Mount Tai. His temperament was close to Mount Tai, and his atmosphere was thick, and he often saw the spirit of smart and beautiful in the thick. The lotus pond is a natural thing in itself. Once it meets the spirit of human beings, it will radiate the spirit of life. Lu Dong wrote lotus, sent things with emotion, and the images also passed on his heart, which gave people a quiet aesthetic shock and made people forget and ponder