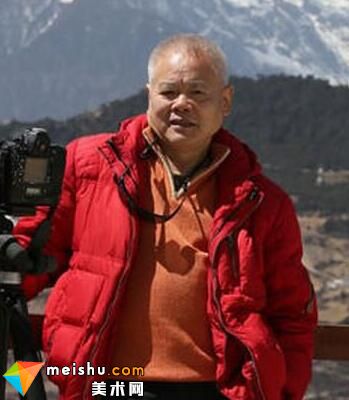 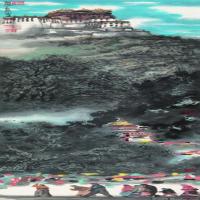 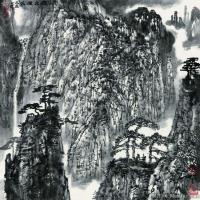 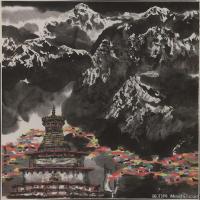 Li Ke, born in 1944, Jiangsu Province, Xuzhou, 1960 was admitted to the Affiliated High School of China Central Academy of Fine Arts. In 1973, father Li Keran began learning landscape. In 1979 into the Beijing academy. 1985 to 1987 into the Chinese Painting Department of China Central Academy of Fine Arts, and participated in the Japanese painter Kayama Yuu held a short seminar. Is now a national artist, member of China Artists Association, member of Chinese Photographers Association, Beijing Academy of Arts Council director, Li Keran Art Foundation Chairman, Mount Huangshan Academy of painting and calligraphy, the Ministry of culture and art evaluation committee, Chinese Tibet protection and Development Association, an association of China painting, China Heshan painting Artists Association vice president.
Li Xiaoke was influenced by the family favorite Chinese painting, in 70s the last century began to assist his father Li Keran creation, life, and under his father's guidance systems Chinese landscape painting. Since 80s has more than 30 in-depth Tibetan area of Western Tibet, Qinghai, the Yellow River, Gansu, the source of the Yangtze River source of painting and photography, life experience. In recent years, many went to Mount Huangshan, Taihang Mountain, Yanshan and other places to sketch. The artistic creation in the painting tradition and Li Keran China inherited the spirit of the art at the same time, with an open attitude, focus on absorbing foreign art nutrition, depth to life, to find their own personalized era, from the strong feeling of the life in the painting language, performance based on heavy experience, formed a special ink painting style. The ancient capital of Beijing, Tibet, Mount Huangshan has become the three important parts of the art creation ink home "series, its distinctive painting language and style by professional recognition and praise, both at home and abroad of attention and welcome. 2003 began to create "Tibet trace" series of prints, to the Tibetan special perspective of the humanities and visual performance of the exploration caused by the arts and the community's strong repercussions. Over the years to actively participate in the promotion of public art undertakings, adhere to the education of Chinese landscape painting, cultivate a number of young and middle-aged landscape painters, students. Planning a number of important academic art exhibitions, and special attention to the development of Tibet's art career. Since 2005, sponsored planning "snow on" "beauty of Tibet" Tibet contemporary art exhibition, to make efforts to promote the development of contemporary painting in Tibet. Because in August 2015 to commemorate the 70 anniversary of victory parade, the Tiananmen gate was the creation of a huge Our wills unite like a fortress. for landscape works ". Paintings and prints by many art galleries, important institutions, collectors at home and abroad.

Ink home
"Ink home" is one of the themes of my concern and performance over the years. Today, many of us are very familiar with the history, culture, experience, emotions closely linked to the home environment, in your time to look back attention, unknowingly disappeared. The quiet Beijing courtyard, Beijing Hutong, palace under the willow, outside the imperial city walls, the old tree lined...... All of these affects people's emotion and spirit, become dependent on people's emotional sustenance. I hope to use my ink language to express the strong impression and memory that gradually fade away.
Tibet trace
In order to find new painting language and feelings, I have repeatedly to the western tibet. After the source of the Yellow River, the source of the Yangtze River, Mount Everest, Qaidam, Ali, Nagqu, Maqu, Xiahe, luqu...... I have a close encounter with Tibetan Tibetans. Tibet's broad, vast and pure, real hot, Tibetans just defended and honest, gave me the shock -- that is a mysterious place that everyone dreams. Trying to get closer, but it is always in the distance, always contain change, loss and eternal...... Tibetan land has become my immortal spiritual home and creative source.
Landscape Mount Huangshan
Mount Huangshan is the sacred place of Chinese landscape painting. In 1978, to Mount Huangshan sketch, and had the honor to meet the famous Japanese painter Mr. Kaii Higashiyama. Since then many times to Mount Huangshan sketch. In 2007, the Mount Huangshan Scenic Area Management Committee of Mount Huangshan Academy of painting and calligraphy, I was invited to the Academy of painting and calligraphy, and the continuation of the Mount Huangshan more love, but also take up the picture of good Mount Huangshan, Mount Huangshan dedication responsibility. Mount Huangshan and Anhui has become an important opportunity for me to explore the landscape painting with content.
learn from nature
"Painting" is an important part of nature gives artists will be moved with the traditional stylized forms and personal aesthetic choice connected, is the natural and traditional discovery and understanding of landscape painting, is an important part of the basic training, the most vigor and vitality. Sketch makes the artist's mind face the ever-changing objective world, can make the traditional and contemporary culture and personal performance experience collide, stimulate infinite creative inspiration, promote the new discovery of aesthetic field.
Print works
Tibet left more than 10000 photos, has become an indelible memory of my life. With the passage of time, still deeply touched by these memories, began to explore the reproduction of the filled with inspiration and passion pictures in print language. In the process of creation, the statues and scriptures carved in stone, printed on the flags of Tibetans as the generation with endless life, with a sincere heart, the eternal memory of continuous track, in order to express Tibet deep admiration and moved.

"Ink painting" is the main language way of Li Xiaoke's art career choice, also is the margin: father, landscape, Chinese painting performance...... It bears the characteristics of Oriental culture.
"Homeland" is the nature of our times and survival, traditional culture is also a "home". When you go in, it will bring you deeply touched and infinite performance space. It is difficult for artists to transform this kind of movement into personalized and stylized painting language, which needs to be realized and implemented by the attitude of "art is bigger than the sky". My father speak of "thousand difficult easy" and "bitter" school "real wisdom" indicates that the painstaking process of "learning"; "asked" to learn "into" is the insistence of Li Xiaoke; "no" is the sentiment in Chinese ink painting for many years; "absorb" "use" is Li Ke towards foreign culture and contemporary visual experience. He has been trying to connect the traditional and nature, life, and constantly look for new possibilities ink performance.
He thought that art started from moving, and art is the trace of life. When we look back on ourselves, we seem to be a traveler on the journey of life, a work that the traveler has done on the road of exploration ".