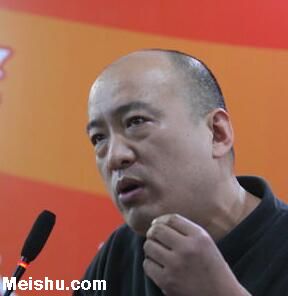 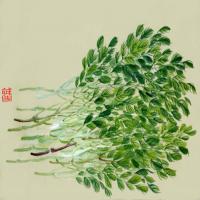 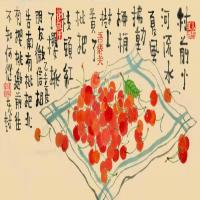 Intro: "the old painting" fire, he works by the CCTV Spring Festival Gala stage from his micro-blog already has a number of nearly a million fans, each one can win thousands of praise and forwarding. He still maintained one to two per day, as always, a piece of ink with a small poem, the picture is simple and lively. Mostly a faceless man in the mountains, flowers, gorgeous and somewhat lonely, personally wrote the poem with ancient and always innovative, such as the recent Chushu, he wrote "a month late rise, began to feel the cool breeze. A quiet autumn lake, boundless Jianjia gray." Sometimes write about the things, "Xiao Xiao bamboo hall, dream in bed. Stock is finished, fortunately overnight grain." But more like an old-fashioned old scholar with reality, make a dialogue with the hearts of the other side, "the town of rain, squandering cover Gu tang. Stop boat do a dream, nowhere cool."
After using micro-blog feel more lakes exist." The tree sighed, even if he did harmless micro-blog content, will from time to time have been vicious comments, "they are just personal dissatisfaction with life to find an exit." Some of his helpless, sitting in his basement studio at Central University of Finance and Economics, a pick a place to smoke and occasionally drink tea. On the table a pile of unfinished paintings, behind a studio, it reminds people of his own work, is a video art researcher and critic. In a corner of the studio, is a table full of ceramic, it is the tree with a bunch of students burned out. In multiple identities between, between the public topic and personal feelings, two kinds of trees in the expression of his constant definition.

Liu Shuyong, Professor of culture and communication, Central University of Finance and Economics, visual culture critic. In the mid 80s of last century, a comparative study of visual language and narrative style. In late 80s, with China calligraphy as a case study, comparative study of China in visual art and Western abstract expressionism traditional language of pure difference relation. In the middle of the 90s, photography was taken as the main object of study, focusing on the language form and classification principle of photography, and then turned to the problems related to the development of Chinese contemporary photography and the process of image communication. In 1997, the representative of "the power" of the concept of photography -- a dialogue published in Hongkong "modern photography", for the first time put forward the "conceptual photography" which is a new concept of image morphology, soon to be "China photography" reproduced, photography controversy triggered nationwide. "China photography four kind of disease", "" documentary photography "has brought us what", "what", "photography can change your old what's in Tibet", "photography language system basic composition" and other articles, have caused great attention to photography. The author of "Chinese cutting-edge contemporary photography series", "World Photography masters classic works".

May 1962, was born in Shandong, Linqu.
July 1983, graduated from the Chinese language and Literature Department of Nankai University, received a Bachelor of Arts degree. In the same year, to the Chinese Department of Central University of Finance and Economics (now culture and Media Institute) taught so far.
In 1997, the concept of "concept photography" was put forward for the first time in the masterpiece "power - dialogue on concept photography".
In October 1997, the island planning organization idea and art critic Photography Exhibition "new image exhibition", as the first major exhibition China concept photography.
In August 2001, participated in the planning and launching of China's first International Photography Festival, "one product International Photography Festival", organized and implemented eight photographic exhibitions, and organized a series of international academic seminars and seminars.
In 2004, planned and edited "Chinese cutting-edge contemporary photography series".
February 2005, planning and editing "World Photography masters classic collection" (volume five, Shantou University press).
In October 2005, in Qingdao planning presided over "juvenile expression - New China 50s image exhibition".
In September 2005, Shandong Zibo planning and presided over by the society, the heart and focus as the theme of large-scale Photography Exhibition "Shandong photography exhibition ten" and academic seminar, clean up Shandong in the past fifteen years the basic situation of image and image resources development.
In September 2010, local planning "image survey" -- the image of Shanxi city in Gujiao Province, geographical landscape and Humanistic Heritage theme photography exhibition, "for the first time with the local chronicles, the image language as expression techniques, combined with sociology principle, history and present situation of a county-level city made a systematic visual manifestation in the sub category, regardless of level with the pursuit of" art "and" dahulun "photography breakthrough and demonstration" (Li Shufeng language).
2011, curator of "land - years - people - Lishui six Documentary Exhibition", 100 works together Lishui photographer Wang Peiquan, Su Jian, Shen Jianhua, Zheng Zhongmin, Pan Shiguo, ye happy, a city tour in the United states.