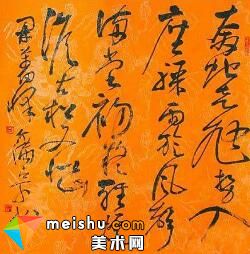 He MANZONG is a member of the Communist Party of China. He graduated from Tsinghua University with a master's degree in history. He is a national first-class artist and professor. In addition to the creation of calligraphy, he studied philosophy and poetry, published philosophy around him and artistic conception of poetry, and put forward that philosophy, poetry and calligraphy are the basic cultivation of contemporary scholars. At present, he is the director of China Calligrapher Association, vice chairman of Hunan Federation of literary and art circles, chairman of Hunan Calligrapher Association, member of Hunan CPPCC and vice chairman of Hunan Red Cross Society. The young and middle-aged writers and artists of Hunan Province, the first-class meritorious service of the people's Government of Hunan Province, and the artists of both virtues and arts. He has successively held the posts of deputy to the Ninth National People's Congress of Hunan Province, deputy to the 11th National People's Congress of Hengyang City, member of the seventh Standing Committee of Hunan Youth Federation, deputy editor in chief of Hunan Youth magazine, President of Hunan Radio and television school, and chairman of Hunan young Calligrapher Association.

He MANZONG, a calligrapher, devoted himself to public welfare and philanthropy, and donated more than 1000 pieces of calligraphy works to the society.

In January 2006, at the spring auction of famous calligraphy and painting works, the book "Shou" was sold for 220000 yuan, all of which were donated to the construction of Wanshou monument in Nanyue.

In 2011, he gave lectures on "philosophy around us" in Peking University and "poetic conception" in Tsinghua University.

In 2012, he was selected as the top 30 calligraphers with the most academic value and market potential.

In 2013, he advocated calligraphers in Peking University to write contemporary standard Chinese characters, devote himself to the construction of rural calligraphy, and improve his artistic accomplishment.

He MANZONG calligraphy exhibition was held in Macau in July 2004, Changsha in October, Aichi World Expo in Japan in May 2005, and Changsha in January 2006.

In May 2001, June 2005 and January 2006, they went to Japan, Hong Kong and Macao respectively to organize Hunan Calligraphy Exhibition. Published news works: introduction to radio and television news (Hunan people's Publishing House); reportage collection: China's contemporary economic power, coal sea writing style (people's Daily Publishing House). Calligraphy album and calligraphy theory works: contemporary calligraphy style · he MANZONG calligraphy series, bamboo slips · Chu Ci, research on Chinese calligraphy and traditional culture, huaisu's self describing calligraphy technique, Wang Duo's cursive calligraphy technique, four styles and thousands of characters, etc. The main points of calligraphy are as follows: on the theme of creation, it is advocated that calligraphy should be used to promote Chinese virtues, and in the practice of creation, verve should be the highest. Committed to public welfare and philanthropy, donated more than one thousand calligraphy works and donations to the society. In 2005, he was awarded the title of "young and middle-aged literature and art workers of Hunan Province". In January 2006, at the national famous works auction, the works with the word "longevity" were sold for 220000 yuan, all of which were donated to the construction of Wanshou Stone Gallery in Nanyue.