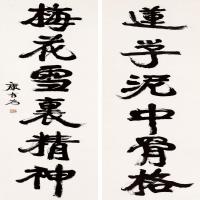 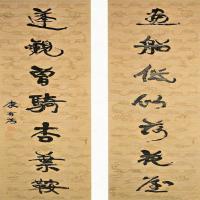 Kang Youwei in the calligraphy advocates the North monument, the book itself into a grid. On the basis of flat and long arcs, the main body of the sports and recreation has been changed from round to round, and the long-winded play of the long front has a good effect on his works. Zhao Qian of the party setback, rhythm flow, but also different from He Shaoji's single round strength and rare pen, which is his unique. As for the line Zhang Yang out of the structure of the turbulence, negate the creation of cottage, but also the overall performance of the Qing Dynasty monument learning. On the creative form, the couplet is the most exciting, see the momentum opened, muddy Mu masculine atmosphere of the United States. Reverse pen possession of front, late delivery Shibujin, Yunpeng Xunqi urgent income, the wrist under the kung fu profound, from which you can see Kang Youwei the pen to ignore the posts, all from the monument out. The turning point often used to mention the dark, round muddy thick. The body is not like Jin, Tang 欹 side of the beautiful, but long write-off large Na, the momentum to carry, with Han Chinese old-fashioned. Some people think that this is the surface of the bluff of the anger. Mr. Pan Bo Ying commented Kang Youwei's words "like a rolling rotten rope." Kang Youwei that the line without texture, the abuse of flying white, looked very vain. Kang Weiyi in the pen to force the pen, the opponent pen, which is caused by his monotonous monotonous a very important reason, often starting without sharp front, pen without missing front, and no frustration, mention is not very obvious, a single line , Lack of change. When the coarse pen see the loose void, not enough convergence of urgency, when a disease. The lack of change with the ink, lack of expression, starting pen saturated with ink, see the white pen, nothing more. Judging from his work of the Central Committee, the inscriptions are often cramped insignificant meaning, which is due to the negation of posts, in fact, his early Japanese classes, or to the European-based.

In fifteen years (1889), Kang Youwei wrote a book entitled "Guangyi Zhou Shuangji", which comprehensively and systematically sums up the monument learning in theory and puts forward the idea of "respecting the monument". The development of calligraphy has a far-reaching impact. Fu cast cloud: "the South China Sea in the book is very deep, the" Guang Yi Zhou Shuangji "a lot of fine theory.The book covers pure from the Puzhuo take territory, it can wash Fan Yong, single standard style.However, Jin and Zhang, not as good as their words.