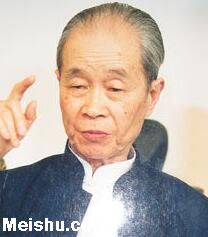 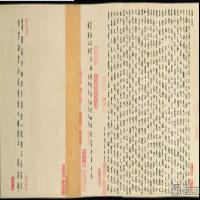 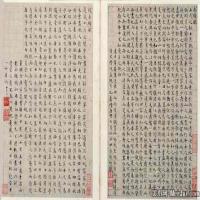 A rich collection of juvenile is in contact with a large number of ancient and modern calligraphy. Fourteen years later, began to study painting, and into the sea when the famous calligraphy painter, connoisseur Mr. Wu Hufan, calligraphy and painting and appreciation day, less than thirty years, that is good at learning ancient paintings known to the south of the Yangtze river. In 1937 to assist Shanghai City Museum for "Shanghai Literature Exhibition" in ancient paintings collection, sorting and display work, Mr. Ye Gongchuo asked to write "the ancient painting abstract directory".
Author of "Introduction", "ancient paintings identification of ancient paintings study", "pseudo false ancient paintings now to be recorded", "the old" painting from the collection of restatements etc.. In old age more than pick up test, brush, landscape, elegant charm show run deep. Classical poetry. Former the Imperial Palace Museum researcher.
February 23, 2012 8:38 died.

Xu Bangda, born in Shanghai in 1911. Father Xu Yaochen, silk merchant, but like the collection, the home of its rich, Xu Bangda was deeply influenced the.
At the age of fourteen began to study painting, from the old Suzhou painter Li Tao (zuishi) to study painting, from Zhao Shiwang (Uncle Ru) to study the ancient paintings and calligraphy identification knowledge. Later, when the sea and into the famous painter and calligraphy connoisseur Mr. Wu Hufan gates.
In 1937 to assist Shanghai City Museum for "Shanghai Literature Exhibition" in ancient paintings collection, sorting, Chen Liezhi, Mr. Ye Gongchuo's writing of "the ancient painting abstract directory".
In 1946 the Chinese fine arts, director of Shanghai City branch, while employed will consultant for the Art Museum of Shanghai city reconstruction committee.
In 1947 has held solo exhibitions in Shanghai China huayuan.
By 1949, Shanghai City, Cheng advisor.
In 1950, the State Bureau of cultural relics Zheng Zhenduo recommended to the Cultural Relics Bureau work.
After 1953, transferred to the the Imperial Palace Museum of ancient calligraphy and painting appraisal work.
In 1953, around the collection and acquisition of 3500 pieces of precious paintings and calligraphy works as the foundation, the reconstruction of the Imperial Palace Museum painting museum.
At the beginning of 1978, the State Bureau of cultural relics should be about to participate in the national painting and calligraphy heritage expert group for museums throughout the country national identification of precious cultural relics, and assume the responsibility of students.
Lasted eight years, into the "ancient Chinese painting and calligraphy drawings" multi volume.
After 1980s, many visits to the United States, Australia, Canada and other countries, investigate the loss of overseas Chinese painting and calligraphy and academic exchanges with foreign experts, made a number of academic achievements.
February 23, 2012 8:38, Xu Bangda illness treatment died in Beijing, at the age of 101. Xu Bangda remains farewell ceremony is scheduled for February 29th.

Xu Bangda and his script to JUNBA, rugged beauty, freely. He made the book soothing and rhythm, brush to brake, not hasty pressing, not weak nor tyrants, calm calm. His script text structure of natural stretch, fully and delightfully, stout like cattle with fine lines, such as snake winding density and white, line with grass, with round body, his style change. The body of Su Dongpo, MI Xiangyang, Su Zi States much, as the word show extremely yan. He traced Li Beihai to the thick gas, ginseng by Dong Qichang Chang Qiyun, supplemented by a famous calligraphy not tens of thousands of pieces of nourishment, eventually make works through overflow a profound momentum and the infinite charm of the spirit. Because the work contains profound cultural heritage and cultural personality temperament, make Xu Bangda's calligraphy style and other calligraphers apart.
Xu Bangda after more than and 70 years of exploration, accumulated experience and Practice for many years, in the entry and wide collection of Big Bo Mi Fu take after gradually formed their own system. The main body behavior and slightly weed, the word node by Mi Fu, and eliminating Michaelis exaggeration, posturing to habit, mellow and mildly, the painter's advantage, make his works show fresh ink lines smooth, elastic and strong texture, in view of a "heart space to see the universe, write good penmanship. The spring and Autumn" momentum.
Overall evaluation
Reading Xu Bangda's calligraphy, ethos and culture comes out, it is full of appeal and vitality.
Character evaluation
"Mr. Xu is a real China traditional culture inheritance, but not rigidly adhere to the old etiquette, follow him as a student for nearly forty years, we went to his home just like back home, when he was learning or reading a book, we will in the next, when we talk about him, he did not condescending." - Xu Bangda disciples, famous connoisseur, painter, Xiao Ping
"We are engaged in the art auction, our experience is the deepest identification of old Xu is the most recognized by the market, because he will never go for the benefit of, in this regard, the old Xu is a model." Beijing auction Kuang general manager Dong Guoqiang
With the identification of "five old" of all gone, art auction market will call more professional appraisal team, rely on the authority and the expert's eyesight and prestige of the era is over, the future will no longer appear some experts say if the situation." - Central University of Finance and Economics auction Research Center honorary director Wang Fenghai
The name "Xu Banchi"
In the industry, Mr. Xu Bangda was known as "Xu Banchi". According to the students' famous connoisseur Wang Lianqi Xu said, this name is precisely from the beginning of 1991 spread, when Mr. Xu Bangda went to Taiwan to do the identification of painting as a museum, because Mr. Xu is high appraisal ability, often identified piercing eye, calligraphy and painting works has just begun half a foot, the old Xu has been identified the authenticity, which won the "Xu half foot" name.