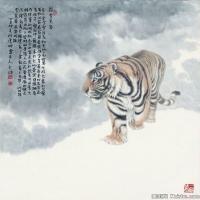 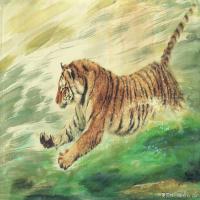 Artistic perspective
Totemism is a most primitive [9] religious form, about to the clan commune period, it refers to the primitive people believed that the clan people and certain species have close relationship and to worship and worship phenomenon. The tiger totem culture detailed in geography "pre Qin myth China The Classic of the Great Wilderness", and in the national integration in the development and evolution, formed a unique culture of tiger. With the development of religion has a dual identity of the beast and Animal Tiger, is deeply rooted in Taoism and Buddhism, Sa Man and other religious beliefs, and affects people's faith and life. The tiger as the object of the painting is also relatively early in the religious themes. The most influential of the Six Dynasties painter Zhang Sengyao is one of the representative figures, his creation to paint the mural. Zhang Sengyao learn Tianzhu boneless, make the audience "Yuanwang dizzy such as convex, as is called" flat ", like zhang". The description of his "Vimalakirti like", "tiger", "Wu Wang grid Hengquan dragon map" and handed down. Unfortunately, the "Wu Wang grid map" has not kept the tiger, tiger paintings style is difficult to research. But after the Southern Song Dynasty, with the rise of the literati painting, this theme has been gradually folk, secular. Until today, many artists have been afraid to touch it, for fear of being labeled vulgar labels. Feng and his unique perspective and expression to the world to show the people of this ancient theme of visual possible, and in order to open up a new direction of the development of animal subjects.
Door line
Tradition and innovation every times artists have to face the problem, we have today for having heard it many times artists, such as the five generation of Jing Guan, Dong Yuan and Ju; Huang, Wang, Wu, Ni; four monks in the Qing Dynasty and so on, they are from the background of talent shows itself, it is because each of them individuals have their own unique language system, that is to say each one of them is because innovation and lead times. The sages of the innovation in the open a new way of looking for us, also set up a mountain for our innovation. Every attempt to innovative artists have to go over the traditional peak, as Mr. Li Keran said: "with the most went out with the greatest courage".
Five Dong Yuan said: "the teacher today than the ancients, the ancients as division of natural division, naturally as nature". This sentence tells the artist innovation the only proper course to take it, we can understand the ancient tradition, nature can be transformed into the painting, and nature is the fundamental understanding of everything, or is everything in the operation of. In fact, the three are interdependent, mutual, not completely separate. The first tradition says, he is created based on the observation of natural understanding on the nature of visual image, so the visual image system contains the laws of nature and of nature of science. If we are smart and sensitive, learning traditional process can be on the nature and nature of enlightenment. An operation of nature everywhere embodies the nature of it, our understanding of nature must be abstract summary in the observation of nature on the basis of. It can be said that in the us the way of innovation, tradition and nature is a specific starting point for us, while its high standard is through the two to understand nature.
Painting tiger Aesthetics
He's a tiger inheriting and surpassing predecessor, created a grid, and provides valuable experience for reference for the comprehensive innovation of art creation.
Artistic innovation is the aesthetic requirement of the times, and it is a characterization of a nation's vitality and creative spirit. Feng Dazhong in the tiger as the theme of the creation of artistic creation, showing wisdom and courage, enviable artistic achievement.
China has the cultural tradition of advocating tiger. I call it the "tiger culture". Tiger culture has rich and profound accumulation, penetrate into the aesthetic and value concepts, and many other aspects of. "Like a tiger" and "a scene of bustling activity", "these words are not only a forbidding strategic point", a symbol of vitality, style and extraordinary tolerance, but also represents a kind of macro weather.
Enjoy the ancient painting tiger, tiger, become a kind of fashion. In the creation of art, it is a profound tradition as the burden of history, to get rid of the fast, so to the "anti tradition"". Feng Dazhong is not abandoned but deeply rooted in the traditional Chinese culture, for a thorough research and analysis, has been abandoned, some development.