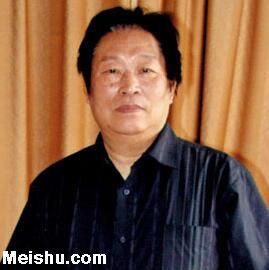 Yu Jigao, born in 1932, Jiangsu, Copper Mt. 1951 was admitted to the Nanjing University art department in 1955, graduated from the Art Department of Nanjing normal college, 1957 to participate in the preparatory and transferred to the Jiangsu Chinese Painting Institute, specializing in flower and bird painting creation and research. Department of national artist. Currently vice president of Jiangsu Academy of Chinese painting, vice chairman of Jiangsu Artists Association, Chinese Academy of painting academy, vice president of Chinese Painting Association, Xu Beihong scholarship committee and other duties.
The painting of Yu Jigao near the teacher Mr. Chen Zhifo, two. The Song Yuan Ming, more directly to nature as the teacher, inherit and carry forward the academy school style, his works "pear spring", "Magnolia", "pheasant", the river becomes warm in spring had participated in the third, six or seven, eight national art exhibition and other various exhibition. And had several awards. Also in the first Asian art exhibition, the eighth international art exhibition, the twenty-sixth session of the World Expo exhibition, successively by the state sent to more than and 30 countries and regions of the world exhibition. 1986, 1988, in 1997 also held in Beijing, China Art Museum, Guangzhou Museum of fine arts, United Nations Headquarters, New York.
The publication of "Yu Jigao" on the album, "Yu Jigao flower and bird painting" three volumes. Also, a sentence, a single picture hanging New Year paintings and other forms of publication. Jiangsu province and the State Council awards and reward their outstanding contributions to the development of China's cultural and artistic undertakings made. The 1997 United Nations Headquarters awards to the recognition of his outstanding achievements in the traditional painting China and great contribution to cultural exchanges in the world.

Following the high growth in rural areas in Northern Jiangsu, poor family, grew up doing farm work, honing his strong will and the habit of loving labor, but also cultivate his deep love for nature and flower. He made a bud in the art of seeds on the fertile soil, fell in love with the painting, because of his hard work, and finally in 1951 admitted to the Department of fine arts, Nanjing normal college, the beginning of a cowboy's artistic journey. He caught up with a good life, met a good teacher, Mr. Fu Baoshi's profound knowledge of art history and painting Mr Chen Zhifo's brilliant achievements, guiding him into the traditional painting of the gate, and select the meticulous painting professional. Childhood vision become reality.
Yu Jigao's fine brushwork flower and bird painting division near Mr. Chen Zhifo, the five generation ancestor two song, more directly to nature as the teacher, and cast to personal life feelings. From his painting, can feel the vigor and a new era of high spirited poetic nature. He seldom goes to describe rare exotic flowers and rare herbs, but rather focus on the life of rare fowls and strange animals, birds and insects in common fruit, give a simple close to local feelings. His painting is not the ancient painting that tranquil and quiet far secluded gas, rivers and lakes flavor, it is joining the WTO, belongs to the new era and the art of the people. Prosperous, filling, abundance, joy, brilliant, elegant and beautiful, lively, innocent, graceful graceful but not showy open-minded, great generosity, this is the high meticulous painting style and tone. Read his paintings, like listening to a cadenza, or that the Jiangnan Sizhu is orchestral music with rapid and rich rhythm, singing the praises of the nature of life, the glorification of aria of beauty and love, arouse people to love life, love of work, love of homeland, love the people's good feelings and noble sentiments, because nature is, if birds sing and flowers give forth fragrance. The gift is for working people with sweat watered the fertile soil of the motherland green life. Painting is silent poetry, silent feel the pulse of the times to hear the heart beating, the artist, this is a people's artist of his fiery utter innocence, love the motherland so deep and persistent every tree and bush, a painting is full of feelings.

Compared with the figures and landscape painting, flower and bird painting mature late, just before the Qin and Han Dynasties as decoration and foil in the painting, the Song Dynasty entered the peak, yuan and Ming Dynasty inherited the Qing Dynasty into the golden age, when the relative stagnation. Although the modern development, but did not form a few "become an independent school of painting". It should be said that the contemporary famous flower and bird painter Yu Jigao in the flower and bird painting exploration, is more compelling.
Yu Jigao was born in 1932 1955, graduated from the Art Department of Nanjing normal college, is a traditional Chinese painting master Fu Baoshi, Chen Zhifo Liu Kaiqu, Li Keran gaotu, received advice. For 50 years, has participated in the third, six or seven, eight, ten national art exhibition, and has appeared in the international art exhibition, published the "Yu Jigao album", "Yu Jigao meticulous flower and bird" etc..
Yu Jigao inherited the traditional painting heyday China elegant elegant, "Song Dynasty painting" to absorb nutrition, with high cultural accomplishment especially poetic emotion and ink, opens up a new conception of fresh and elegant, warm and lively and interesting for the flower and bird painting, forming a rigorous composition, superb technique, fine pen the bright colors and distinct "following the high" auspicious bird flower style. From his paintings "Rui Chun", "cuckoo", "tits autumn Lotus", "Sakura egret bird", "Dove", "lovely purple chrysanthemum flowers in bloom", not only great generosity, open-minded, vivid "shape" see, also saw the abundance of joy, elegant and beautiful, full of vigour "God", and even smell the flowers, heard the birds, feel the warmth of sunshine and the painter close to nature childlike love, make people can't help to enter the realm of refreshing.
The paintings of Yu Jigao, is the beauty of nature and beauty especially, to "transform" with ideas and techniques, with vivid pictures and elegant picture on the carrier. Is currently the vice president, China Institute of painting vice chairman of Jiangsu Artists Association, national artist Yu Jigao, did not trouble tired, still groping forward on the road of Chinese painting.

Yu Jigao and Fu Baoshi
Famous artists, national artist Mr. Yu Jigao is one of the most recognized painter closely by Jiangsu painting and Fu Baoshi origin. During the cultural revolution, Yu Jigao Bao Fu under both intelligent and courageous, hundreds of paintings of the past, has aroused great interest among readers. Yesterday, Mr. Yu Jigao recalled to reporters from first to last follow Mr. Fu Baoshi painting of the past.
First class, Mr. Fu to a run
"In 1951, I was admitted to the Nanjing University art department, Mr. Chinese painting is my teacher, and personally sent us the fourth grade graduated from the first grade! Some people say that we are most fortunate to a group of students, because Mr. Fu had only taught art history, never taught in traditional Chinese painting!" brought their own the teacher, 72 year old Yu Jigao still has as the year of the first class so exciting.
He said it was in a classroom of South Song beside Mei Fu, dressed in a plain grey gown, arms held a famous painter Chen Zhifo's album. A pair of deep eyes, a look.
The first meeting, Fu Baoshi a blow to Yu Jigao and his classmates. Ask you the name after Fu Baoshi asked suddenly: "today to give you a test, what are the painters who speak Chinese history?" this can be stumped just leave this batch of College Yu Jigao, everyone looked down, but no one can speak out. Mr. Fu did not blame the students, he smiled and said: "well, a piece of white paper, you can draw the latest and most beautiful picture, I will teach you!"
Yu Jigao said that Mr. Fu Baoshi knew he was a poor student, often gave his paper ink to him, in art to give him special "pointing. Go out sketching, hand taught Yu Jigao how to sketch the plum blossom. The sketch is over, Fu Baoshi also took Mrs. Luo Shihui made the beef slice, for these poor students a sumptuous meal. The most excited about is Yu Jigao, Mr. Fu is also an exception to let him into his studio, it is impossible to imagine the courtesy in others.
The arts said, Fu Baoshi paints well, because there is a secret weapon in the studio, so he rarely let people into his studio. The fall of 1998, it is the creation of a "Shaoshan Tsui" Fu Baoshi just as Jiangsu hall, because the big frame, Fu Baoshi called Yu Jigao to his studio to help
Yu Jigao thought, as the teacher of such a famous painter, studio is full of antique calligraphy and painting, with bright windows and clean tables, but in a look is not like that. Yu Jigao said, Mr. Fu's studio ordinary almost simple, the walls and the ground is full of ink in the studio, in addition to a large wooden table and on the corner of the rolls of paper, almost no what. People say Fu Baoshi is such a mysterious studio!
The teachers and students with the "painting of spring"
In 1955, Yu Jigao after graduating from college, assigned to the Jiangsu Provincial Department of culture and art studio work, due to the work, can often see the teacher. Yu Jigao told reporters that in 1959, as a junior, he had the honour of Fu Baoshi, and Chen Zhifo, Jiang Ren, Hu Xiaoshi famous painter a flower bird painting, it made him unforgettable.
It was the winter of 1959, the province held an important meeting in literary and art circles Fu Hougang CPPCC auditorium, and many leaders and celebrities in literary and art circles have attended the meeting. Suddenly, Fu Baoshi call to Yu Jigao, ready to draw his tool paper will come up, the original meeting gap, many artists to paint. Yu Jigao took a pen and paper came to the meeting, Mr. Chen Zhifo first opened, four feet in the lower right corner of the Xuan drew a elegant bloom. "Who draws next?" someone asked. Mr. Fu Baoshi suddenly said: "following the high, you!" Yu Jigao thought he got it wrong, here was the Jiangsu painting industry's leading figures, Yu Jigao who dare not write. But Fu Baoshi also encourages him once, Yu Jigao finally plucked up the courage to draw a line in the winter under the red camellia, Fu Baoshi, Chen Zhifo two teachers responded with a smile approvingly to him.
Next, Fu Baoshi added a large Stalagmite in the painting, the painting of the three Jiang Ren myna, famous calligrapher Hu Xiaoshi in the "spring" wrote the inscription. This picture framed, "spring" has long been hanging in the hall to the CPPCC, but during the cultural revolution, has all gone. Many years later, Yu Jigao heard that the painting was the Nanjing Museum collection, he had to take a photo, put it in his study, as a permanent witness of friendship between themselves and the teacher.

Deep tradition is the advantage of Nanjing, but some artists are more impetuous. Mr. Yu Jigao set a good example for the new people with his exquisite skills, Chen Zhifo had had an important impact on him, but he also absorbed some foreign painting, enrich their artistic language.
Yu Jigao takes the traditional art style, but obviously. He walked down the road, constantly enrich their expressive force, the more painting the deeper, the more perfect painting.
The works of Yu Jigao not only absorbed the Song painting style, has absorbed the characteristics of folk art, has extensive mass basis and various publications of billions of dollars, showing his works deeply rooted among the people, if every artist can be welcomed by the audience, it will play a very big role.