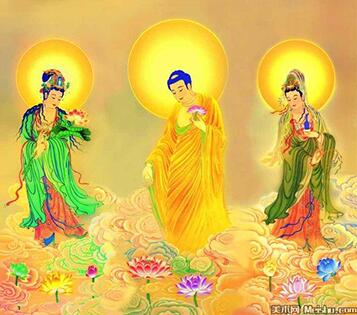 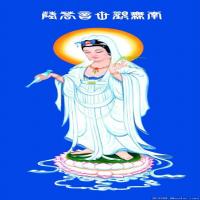 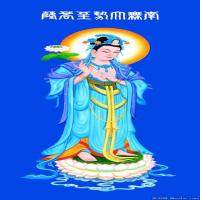 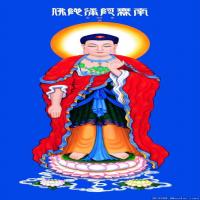 Mahasthamaprapta called "the Sanskrit Maha pot", now in Elysian Fields, is the second pick for the position of the Buddha bodhisattva. According to the "sad" by China records, the past is still Amitabha wheel king, mahasthamaprapta second prince, named "nemo". When the treasure Buddha help wheel King (Amitabha) and the first Prince (Avalokitesvara) Vyakarana, second prince also said: "I beg to report the Buddha, such as, good roots and all my industry is pure, all to anuttara three small Bodhi three. May the merit times (i.e. light Buddha Bodhisattva), just as the beginning of Buddhism, at that time I will first ask the buddha. The Buddha said all the time testimonies, in line with the interests of the Bodhisattva. After the Buddha nirvana, until the method consumed when I close behind, fill in the position of the Buddha the complete fulfillment of unsurpassed enlightenment. When I Buddha, all the various Buddhist, the pure Dharma of my homeland of the world and solemn, Nirvana, Dharma live time and times all merit light Buddha made no difference, equality. "
When the Buddha told the second treasures: "you may consume the prince of today's world pure Buddha land, will be as you wish. You will be as pure world the most extraordinary achievements, unsurpassed enlightenment, name for "good living treasure mountain king buddha". Because you vow to the spiritual world of pure and sublime uptake so, hence the name "trend" for you. " Based on an article (Avalokitesvara) collected by mind karma together, should know and mahasthamaprapta Bodhisattva, a fellow may, after eons since, not contrary to each other away, and even solemn land, the order of the Buddha, spiritual merits are equal.
The first "hedongshihou" statement of the Buddha Famennian, earnestly especially important: mahasthamaprapta foyan: "beg to report in my memory, as in the past when the Buddha was born before the robbery," no amount of light". Twelve in a robbery in succession such as Buddha, finally a Buddha called "super moon", so I samadhi Buddha buddhism. For example, there are two people, one is to concentrate on each other, and the other one is devoted to forget each other, so two people, sometimes encounter sometimes do not meet, or meet or do not meet. If two people each other is, two people each other is the mind is very deep, so even as shadow generation after generation, is not far away from the contrary. The ten directions of the Buddhas, compassionate thoughts like beings, mother is my dearest son. If the children to stay away from escape, so although the mother of missing children and what. If the child can also miss mother, like mother missing child, mother and child had more students, will not violate each other away. If the hearts of all the Buddha, Buddha or the memory or missing, or the future will be able to see the Buddha, not far from the buddha. Don't leave by other convenient methods, as long as you concentrate on your memory of Buddha Dharma, nature can really show seeing nature. As the human body flavour, natural aroma, this is called "fragrant light solemn" (the Buddha Dharmakaya incense, Zhi Huiguang, solemn Buddha from the heart of this in my mind) for early spiritual practice, the Buddha's heart, no body could enter. Today in this world, people gather practice Buddha, guide to the Western Pure Land of ultimate bliss. The Buddha asked me for sophisticated method, I have no other choice but to close together, respectively, six, net read constantly as one Buddha, to hold the position of Dinghui samadhi, it is the most excellent and most convenient for the first of the Dharma gate. " Mahasthamaprapta, by reciting the Buddha's name in Buddhism, and practicing the Bodhisattva, sentient beings, do not leave the Buddha dharma. Practice the Pure Land Sect who should know what to imitate!

The mainland silver gilt
Split cast, Sam West
Huang Chun and this is a group of Buddhism worship theme, called the "Western Trinity", is the three God of Buddhism that western Elysian Fields consists of the main statue of Amitabha, and the two retinues of Avalokiteshvara and mahasthamaprapta. According to "Amitabha" records, Amitabha has unbelievable merit, if all life comes to recite his name, he will be holding a lotus, led by the twenty-five great bodhisattvas to connect, Avalokiteshvara and mahasthamaprapta are the first twenty-five Buddha Bodhisattva, is an important assistant Amitabha led all West Elysian Fields. The pure land thought spread to China from the Eastern Han Dynasty, the Wei and Jin dynasties have been greatly developed in the northern and Southern Dynasties, Sui and Tang Dynasties formed one of the famous eight sects in China Jingtu, after the Tang Dynasty with the continuous secularization of Buddhism, it has become China's most popular worship of Buddhist thought and religious school, has still not bad influence. This group of statues is an important historical Sam West Five Dynasties period of the pure land thought popular witness. The main statue of Amitabha sitting on the central cross junction, spiral hair headdress, top show high meat bun, large lobe shoulder, plump shape and rounded, eyebrow bow, eyes down, air quiet introspection, head with a pointed round head light, head light on the characterization of fine flame, sophisticated technology. Slender waist, wearing bare right shoulder robe and monk dress clothing lines smooth and natural, a legacy of the Tang Dynasty clothing of thin body. Left hand knot with India, said to meet all the aspirations of all sentient beings, right hand knot fearless, that can lift the fear of living beings. The body is high waist lotus seat, upper trim lotus three, lotus lotus well-proportioned, under a heavy arrangement. The main statue on the left side of the Avalokiteshvara, the left hand when the chest holding lotus, the right side of the application of the knot and India, the right side of the general trend to the Buddha, the left side of the application of the knot and India, the right hand when the lotus. Two Bodhisattvas are all wearing a crown, towering hair, face serene, the head is also equipped with sharp circular flame head light. Slender body, upper body bare chest, his left shoulder Baldric, oblique Phi network armpit, dressed in dress, clothing lines in a U shape distribution, such as wave like natural beauty, belt, and bare bow. There is a shoulder cape silk, silk Cape snake fell, natural and elegant. Stand sideways Gong lotus seat, similar to the main statue rosette shape. Sam like before Anritsu two bronze Vajra dense diamond and the trace of Luo Yantian. Lux image and clothing are exactly the same, all head beam updo, cumei platyrrhiny, scowled, after the first round head light, but the flame patterns, indicating their identity has not yet bare body, chest and abdomen overcome all worldly thoughts and enter sainthood; his bulging muscles, chest decorated necklace; dress pants foot mask, belted waist and knotted, U glyph of drapery off the thin soft cloth quality; also with a large body of silk cape; double foot in monolayer coated on the rosette. Two lux central a censer, its mouth along the four lotus flower in full bloom in 22 relative mouth on a dove pan Tuo lifting furnace. Under the bed is a square shaped seat four pot door, door trim pots serrate four lines, surrounded with fence and column look. A bed with a lion crouched beside each bipedal lion, two foot erect, after hip to head, tail, vivid and realistic. The whole group of statues precise layout, clear, vivid, simple style, complex shape and sophisticated technology, the theme of the novel, unique material, is China's existing five dynasties Buddhist treasures. After the Tang Dynasty, the art of Buddhist statues. The so-called realism, that is, to show the true character of the real life in art. In the realistic style of Buddhist art, showing the new spirit of the times: the statue with a full body, muscle, sturdy, ornate, and the most prominent is the lines of clothes, clothing lines wide smooth, texture strong, overall impression of cordial and natural beauty of art; artistic style and performance practices have been in completely out of the foreign art mode, showing a distinct national characteristics and rich secular aesthetic taste. This group of Western Sam as artistic features vividly embodies the distinctive characteristics of the times, it is an important representative of Buddhist art in this period of. See: "China art" sculpture sculpture volume of Sui and Tang dynasties.
ceramics
Chinese dragon porcelain works "Western Trinity" inherited thousands of years of traditional porcelain sculpture technology, has formed its own unique artistic style, the product, the hard white color Yingrun, smooth and dense matrix. Glazed crystal bright, white is China (BLANC DE CHINA) Dehua white porcelain Luxuries Oriental porcelain treasures. In November 2012, the work won the first China (Dalian) International Cultural Industry Fair excellent arts and crafts works "gold medal". May 2013 won Chinese arts and crafts "Hundred Flowers Award" gold award.