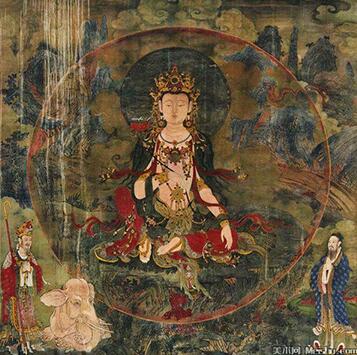 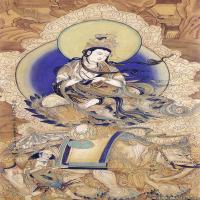 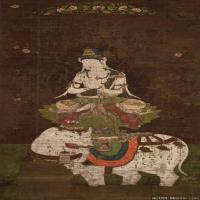 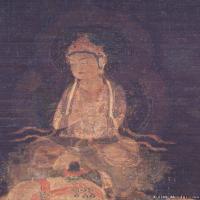 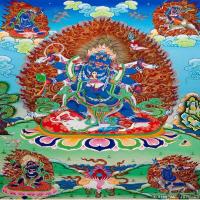 Samantabhadra, Sanskrit name Samantabhadra, or Vis/vabhadra. Three, mando Bhadra three Bodhisattva, Bodhisattva mantra. And for the good and the good. China's four major Buddhist Bodhisattva (Avalokiteshvara, Manjusri, Samantabhadra Bodhisattva, one). Is full of immeasurable wish, now all general Buddha Mahayana saint, and Shakya Muni Buddha Manjushri is threatened. The Manjusri riding a lion on the left side of the paternity Buddha, Samantabhadra rides a white elephant paternity right. If this threat of the two + table, Manjusri Wisdom, wisdom, display card, Henrietta, Samantabhadra, CO Quan, such as reason, one card successfully complete dinghuiqiao. Manjusri and Samantabhadra Bodhisattva for the first of all, the Buddha preached often helps guide by benefit. This Buddha body and merit everything, from Miaoshan, called samantabhadra.
The name of the beginning for three Samantabhadra Buddha Mandala, and the wide in the common belief. According to the Lotus Sutra Samantabhadra advised hair products, Samantabhadra by six white teeth, the guardian of walker. Taiwan two hundred pacalDannynouncedrned ten is Samantabhadra topic, according to Li Chan chanting the phase line, for the purpose of seeing samantabhadra. And the vaipulya Samantabhadra vows the goods ten said ten of the Samantabhadra wish, namely: homage to the Buddha and praise of Buddha, extensive repair support, repent karma, rejoice merit, please, please turn the Falun Buddha was in the world, often with Buddhism, all sentient beings, to all. By one the ten may, the Lin Mingzhong, kindness knows no bounds, this may guide the king Amitabha, who Elysian Fields. The ten great vows for all Bodhisattvas wish to flag, it is also known as the sea to samantabhadra. In order to the Bodhisattva, commonly known as the big line of samantabhadra. Temple of Mount Emei in Sichuan.
"Tathagatas unimaginable realm" cloud:
"There are ten Buddha and other Buddhas dust. For all the solemn Vairochana dojo. Bodhisattva to sit in the meeting. The name of avalokitesvara. Manjusri. Earth Store Bodhisattva。 Void bodhisattva. King kong. Vimalakirti. Bodhisattva of light and light. To destroy the bodhisattva. Hand bodhisattva. Dahui bodhisattva. Samantabhadra. Such Bodhisattva mahasattva. For the first... Samantabhadra, Sanskrit name Samantabhadra, or Vishvabhadra. Three, mando Bhadra three Bodhisattva, Bodhisattva mantra. And for the good and the good. China's four major Buddhist Bodhisattva (Avalokiteshvara, Manjusri, Samantabhadra Bodhisattva, one). Sakyamuni Buddha Samantabhadra auxiliary promote Buddhism, and all ten parties, often under the seat of the Buddha Dharma prince, he and Shakya Muni, Manjusri called Sam kegon". Therefore Samantabhadra vows Esther: "Samantabhadra vows Granville God, now everything Tathagata before general." It said: "the Tathagata has ten eldest son, whose name said Fugen statue." Samantabhadra, not only to praise the Buddhas wide endless merit, and can repair supreme offerings, to make the majority Buddhist, of boundless love, their wisdom is high, wish for deep, weifo knower."
Samantabhadra, called "Bi Tuo epilogue lost sanskrit". In China the "sad" records, when Amitabha was Runner King, Samantabhadra was eighth Prince "Min", the treasure of the Buddha, vowed to do not like in the pure world of land, practicing the Bodhisattva salvation. Should not repair solemn ten thousand net world, make its solemn clean, like "green light sweet paradise". At the same time to educate the boundless Bodhisattva, so that they can be assured of peaceful heart, Mahayana Buddhism, the great heart of the Bodhisattva is full of his degree and the world. He is the treasure of the Buddha will obliterate map "this name, change the number of" Pu ", and" knowledge he granted to remember in the north water good net world merit "in the future, the successful achievement of unsurpassed enlightenment, Buddha Chi just roar ease king buddha".
"Hedongshihou" according to the white cloud: Syria: the statue on the Samantabhadra Bodhisattva Mahasattva had readme, and Ganges RIver sand as Prince method. The ten party to the Buddha Samantabhadra as an example, teach Bodhisattvas Samantabhadra repair. Repair Samantabhadra must realize Pilu of sea, and then into the door of samantabhadra.
The Buddha asked tact, said: This was originally Samantabhadra, but with ear consciousness, with read respectively, can the wisdom light cluster, have great freedom. If the other party, the constant sand bounds, a sentient being, heart invention Samantabhadra walker, I immediately take Samantabhadra six white teeth, one thousand, front to its heart, meet with, even if the barrier biyin deep, can not see me, I will also secretly for him the top, so that he will protect the comfort a.