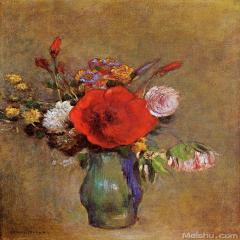 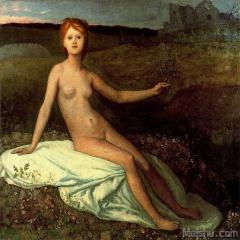 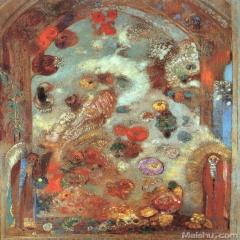 The symbolism of nouns derived from the Greek Symbolon, which in Greek means "a piece of wood (or a pottery) is divided into two parts, both sides each hold a meeting again into a block, a token of love". After the evolution will become "as a concept with a form of learning, which is fed on behalf of any ideas or things on behalf of lead, who can express some concepts and symbols or items of things is called the" symbol". It is usually people use metaphor, it relates to the essence of things, meaning far deeper than metaphor. It was an art trend in France and several western countries in the late nineteenth Century. It was a reflection of some European intellectuals' dissatisfaction with social life and official salon culture. They did not dare to face reality, do not want to directly express their meaning, often using symbolic and allegorical way, another fictional world in fantasy, express their desire, thus resulting in a modern symbolic art. In 1886, Jean Moreas published "the poet first proposed the name" Manifesto of symbolism.
Symbolism in art and by the British pre Raphaelite poet Mallarme, Porter Lyle, musician Wagner and Nietzsche influence subjective idealism thought. The symbol advocates the emphasis on subjective imagination and personality, to create a magical picture with hints and symbolic, they no longer have time to see the true performance, and through specific images to express their own ideas and inner spiritual world. In the form of the pursuit of gorgeous stacking and decorative effect.
Symbolism is a literary and artistic movement at the end of nineteenth Century was born in France, great influence of intelligentsia in Paris, and on twentieth Century the development of aesthetics, and played a certain role. The movement is mainly in France, other cultural centers in Europe, there are some followers, such as Germany, Belgium, etc..
The symbolism is divided into before and after symbolism symbolism. The symbolism of the nineteenth Century, during the French School of poetry. Representative: Baudelaire, Verlaine, Rimbaud and mallarme. Baudelaire's Sonnets "and" for the first time put forward the famous "and" theory of symbolism. After the symbolism emerged in the post-war world literary trend, reached its peak in 20s, near the end of 40s, the creation of a variety of writing until later in. Its main features are: the creation of morbid "beauty", the performance of the heart of the "highest reality", the use of symbolic cues in the illusion of the image, the use of music to increase the effect of meditation.

Symbolism is originated in France in the mid nineteenth Century, and extended a literary genre in Europe and the United States in the early twentieth Century, is the embodiment of symbolism thoughts in literature, but also a core branch of modern literature, poetry and drama mainly covers two areas, its influence continues today. The western mainstream academic circles hold the birth of symbolism literature is the watershed of classical literature and modern literature.
French poet Charles Baudelaire and American poet Edgar Allan Poe is the symbolism pioneer. Although the "symbolism" first appeared in 1886, but the works of Baudelaire and Poe early in the middle of the nineteenth Century the first involves the concept of symbolism.
In 1857, the young French poet Baudelaire published the "flowers of evil" is a masterpiece of symbolism. "Flowers of evil" as like a monster appeared in the French poetry, a French literature, a remarkable event and the history of world literature. Baudelaire became a literary scholar, of which he was the centre of a new literary genre is rapidly formed. But, because of his important followers Verlaine, Rimbaud and Mara beauty, this new genre in the late 19 century; the 1886 and 1891 reached the period of prosperity.
The symbolism and can be divided into 3 stages: Baudelaire before bud symbolism. In this period, France's first prose poet, essayist Naval Bertrand; poet Lott Rea Mon and the famous American poet and writer Edgar Allan poe. They and poetry theory has to Baudelaire and a large number of symbol later poets creation happened, but also not true "symbolism poetry. The second stage is the Baudelaire era. Baudelaire is not only the ancestor of symbolism; is the pioneer of the modernist literature, we put him in this stage called pioneer period symbolism. The third stage is the Baudelaire after 3 important poets: Rimbaud, Verlaine in Mara period, the United states. We call this period for the symbolism of the orthodox. 3 because of their personal efforts, symbolism at the end of nineteenth Century appeared the upsurge of hitherto unknown. Rafg of France, and Xieniai mentioned above are poets such as Moreas has joined symbolism. With the creation of a large number of symbolism poetry, formed a romantic to drown the disintegration of the momentum in popularity with the Pearl, send in the pattern. After 1890s, poetry and began to spread to the Western European and North American countries, where to find many companion. Those who became the backbone of the late symbolism in 1920s. However, in France, after the summit, the symbolism immediately began to decline.
In 1891, the "symbolism literature declaration" author Moreas from the first announced symbolism, and advocate a so-called "Roman style" literature, trying to restore his ancestors of the Greek tradition of ancient literature in Rome. Then, Mara, Rimbaud, Verlaine America respectively in 1891, 1896 and 1898 died, many other symbolist poets have chosen a new development direction, no longer follow the standard of symbolic art. The symbolism as 70 literary schools, to the end of nineteenth Century has actually disintegration. However, the symbolism as a literary trend, its influence has been deeply rooted in france. And because Mara America famous poet, symbolism in late nineteenth Century began to cross the border to France, Western Europe, North America, to the last century in 20s, and rise after symbolism.Since 1885 a symbolism in the name of the rebellious idealism in literature and art field also developed, painters and writers are no longer committed to the faithful performance of the outside world, but to show through the illusion of symbols and metaphors and decorative picture of the dream to enlightenment to people.
Is the main representative painter with symbolism peevey de Chavannes and Redon. Symbolist painters did not create a new form of school, they only care about the poetic expression, the mystery revealed. Symbolism painting is a kind of exploration of new content on the basis of feelings, not by reason or objective observation as the foundation, but beyond the appearance of intuitive inner strength and imagination.
France is the nineteenth Century painting art center, the main representative of French Symbolism, and Redon Moro chavannes.
Symbolism painting performance in the European countries are. The Swiss painter Bcklin, David Jose Gangte Ni, the Italy painter, a Belgian painter, thinking and so on, are symbolism painters.