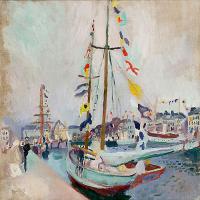 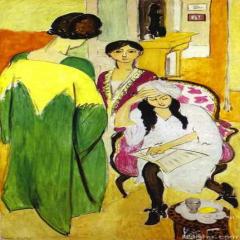 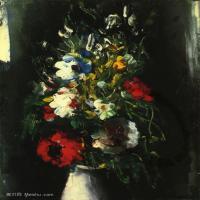 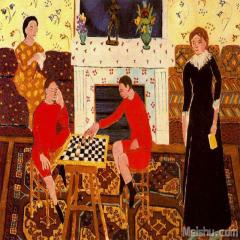 In fact, not to mention Fauvism is a genre, because it has no theoretical system and program of art itself, these artists together force is a strong desire to seek a new painting language in their heart. So, finally, we do not see David, Angell, prudhon such a pattern almost the whole system, but each see art style. The origin of the word "wild" is thought to be caused by a sculpture at the exhibition. When the art critic Louis. Vaucelles found a statue in fifteenth Century Italian style statues of children, exclaimed: "a beast in Donate Lo." The statue itself is no longer a topic of conversation, and even Henry, Rousseau to participate in the exhibition of the hungry lion, nor is the "beast" this word has a special significance of the reasons. The real surprise is that the "beast" artist in the wild colors, simple lines and exaggerated deformation. In this group the "beast" the painter's works, express the people see is not the feelings of the literature, painting is not on impressionism but a reluctant to part, is the form of the impact be taken by surprise.
FAUVISM (1905-1910), "Fauvism" is from the French "Fauve" (Beast) the word, how can it be called? The name of the wild animal was accidental. In the autumn of 1905 in Paris, a group of young artists, who were against the Academy, came up with their own strong and free works. A special room in this exhibition in the exhibition works including Matisse, Framme J, the new tendency of Teresa, Manchester, Shandong Aomang Jain, Marche, Duncan, Li and other young artists was esther. Critic Walker (Vauxcelles), foot into the exhibition room, the young artists who are very intense appreciation of painting. Just in the center of the room, display as a sculptor Marche near Donatello (Italy early Renaissance sculptor) style school bronze sculpture "child head". Walker and Searl pointed to the statue with a sarcastic tone said: "see! Donate Lo in the wild." Therefore, the beast (Fauves) call, is generally used to refer to this group of young artists, for their intense unrestrained drawing is called "Fauvism" the special exhibition room, later known as the "beast threshold" alias. This is the beginning of this century, "wild animals". One of the earliest forms of art since the twentieth Century. The painter is Postimpressionism Fauvism, that painting to express the subjective feelings, no shading performance, contour often bold strong color coated with flat and curved, and depicts the scenery will be simplified, the picture is full of decorative.Fauvism was on academic betrayal, they moved to thin performance in-depth of impressionist style hold a defiant attitude, continue to explore the post Impressionist Van Gogh, Gauguin, Cezanne and others, the pursuit of more intense artistic performance. This faction of the artists, they absorb the eastern and African black carving art expression techniques, pay attention to the performance of pure form, red, green, green, yellow and other eye-catching strong color painting. They tied with these primary colors, plus large strokes, simple lines as exaggerated iambic patterns, to achieve individual performance, the intrinsic true feelings, extreme indulgence revealed. To minimize the description, to maximize the performance of beauty. There is a clear tendency of their works. Someone took Fauvism as a part of the expressionist movement. Some people think that is not a Fauvist art movement, is only a temporary stage Matisse's artistic career, a special attention line and color performance, without any restraint stage program. Matisse later recalled: "for me, the test period is beast painting tools, I have an expressive and meaningful way, the blue, red and green tied together."Fauvism is a popular trend of modern painting in France from 1898 to 1908. Although it is not clear the theory and program, but a number of artists in the period of the aggregation of active results, so it can be considered as a group. Fauvism is keen on the use of bright and strong color, often with paint straight from the tube out of the paint, in a straightforward and extensive style, create a strong picture effect, fully shows that the pursuit of emotional expression of expressionism. Fauvism gets its name from the 1905 Paris autumn Salon Exhibition, at that time, Matisse led to a number of avant-garde artists exhibition hall in the same layer of work, caused a great disturbance. It was the image of these paintings called "a tin of paint thrown in front of the public". While the later hit "Cubism" name "Jill Blas" magazine reporter Louis Vosseler, was inspired to think of this is exactly the right name. He was in the glare of the color make noise at the central hall of the Marche (Albert Marquet), found that small bronze statue made a Renaissance style, cried: "Donate Lo was confined in a cage in the beast!" (Donatello in Renaissance Italy outstanding sculptors). Soon, this jest in "Jill Blas" magazine published, "name of Fauvism" will soon be widely recognized. When the "cage" in the "beast" qingchaoerchu, held a stunning exhibition, Fauvism is of huge increase, rising momentum. At the beginning of this with ironic name, later gradually lost its derogatory. Fauvism continued his exploration of Post Impressionism Vincent VanGhon, Gauguin, P P Cezanne and others, the pursuit of a more subjective and strong artistic performance. On the development of Western painting, have an important impact. They absorbed the Oriental and African art expression, in the painting to pay attention to create a different from the western classical painting sparse, simple mood, there is a clear tendency of freehand brushwork.