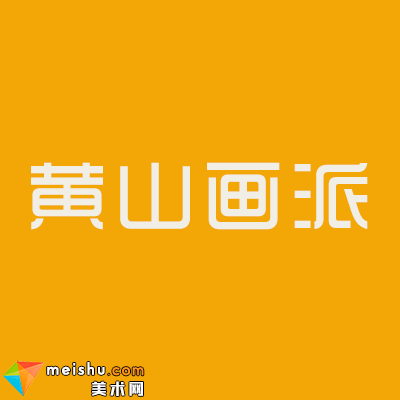 In the second half of the seventeenth century, Chinese society was transformed into a dynasty. The painting art of this period pays attention to expressing spirit and advocates super-leisure and charm, which has distinct characteristics of the times. The salivation of Huangshan Painting School was also attributed to the vigorous development of a group of adherents in the late Ming Dynasty. They "don't want to hear, just outside the room, mountains and rivers," the fame has faded away, hidden in painting and calligraphy. The difference between Huangshan Painting School and Xin'an Painting School lies in that "Xin'an" refers to a school formed by a group of Huizhou painters who interact with each other; and "Huangshan" refers to the type of landscape painting abstracted by the shape and content of Huangshan and exercised by brush and ink. Mei Qing is a key figure in the relationship between Xin'an School and Huangshan School.

Mei Qing (1623-1697) is a native of Xuancheng, Anhui Province. He is a friend of Jianjiang and Zheshi Biao of Xin'an School of Painting and Shi Tao.

Shi Tao (1642-1718) was a native of Quanzhou, Guangxi. He lived in Xuancheng, Anhui Province from 1670 to 1687. During this period, Shitao activities were in the area of Huangshan and Jingting Mountains. At the age of 28, Shi Tao's first trip to Huangshan had a great impact on his later creation. Influenced by Shi Tao's works, Mei Qing also went to Huangshan for the first time in 1671. Later, Shi Tao and Mei Qing visited Huangshan many times. Huangshan in Mei Qing's works is based on the real scenery of Huangshan and sublimates the natural Huangshan Mountain to the artistic Huangshan Mountain. Mei Qing admits that "after traveling to Mount Huangshan for the rest of the year, most of the pens and ink are written in Mount Huangshan." It can be seen that Huangshan plays an important role in the artist's artistic creation. Due to the intervention of Mei Qing and Shi Tao, Xin'an School of Painting broke through the regional limitations, thus forming what people call the "Huangshan School of Painting".

Shi Tao, Mei Qing and Jianjiang are known as the three giants of Huangshan Painting School. They are not bound by the ancient law. Although they belong to the first-class school, they all have distinct personality and artistic style. "Shi Tao gets the spirit of Huangshan, Mei Qing gets the shadow of Huangshan, and gradually Jiang gets the quality of Huangshan" (He Tianjianyu).

When it comes to Meiqing, Shitao and Jianjiang, the three pillars of the Huangshan School of Painting, it is said that although they belong to the first-class school and are not bound by the ancient laws, they all have distinct personalities and artistic styles. "Shi Tao gets the spirit of Huangshan, Mei Qing gets the shadow of Huangshan, and gradually Jiang gets the quality of Huangshan."

Although there is no clear record of Mei Qing's teachings, we can still see the traces of Wang Meng in the Yuan Dynasty from his paintings, which were also influenced by Huang Gongwang, Ni Zan, Wuzhen and Shen Zhou in the Ming Dynasty. It not only contains Nizan's cool and easy painting style, but also is good at mastering the art, emphasizing self-expression consciousness and flaunting personality. He once described himself as "copying a hundred schools of thought in an instant, lighting and dyeing everything as it comes into being". He also specially ruled one side of the chapters, "Do not care for the present and love the ancients". From this we can see Mei Qing's attitude towards inheritance and learning of tradition. Since Shi Tao came to Xuancheng and lived in Xuancheng for more than ten years, although Mei Qing was 19 years old, he had forgetted his old age and made friends with him. He was stationed at Guangjiao Temple in Xixi and at Tianyan Pavilion in Mei Qing's study. They often discussed poetry, literature and painting together. In the early period, under the influence of Mei Qing's painting style, Mr. Ya Ming, a famous contemporary painter, wrote for Mei Qing. The epitaph calls it'... It is Shi Tao's forerunner of success.

Later, however, Mei Qing was more influenced by Shi Tao. It can be said that their style of painting was permeated with each other, and their style of painting was quite similar. Undoubtedly, Mei Qing founded Xuancheng Painting School with her unique style, which is the leader of Xuancheng Painting School. The important painters of Xuancheng School are Shi Tao, Banshan monk, Mei Wei, Mei Lei, Mei Qing's son, nephew Mei Geng and Mei Yi.

Modern painters Huang Binhong, Wang Caibai, Liu Haisu, Zhang Daqian, Li Keran and Lai Shaoqi all left works on Huangshan. In particular, Huang Binhong, a master of art, began copying works of Dong Qichang, Shitao, Jianjiang and Zheshibiao when he was young. When he was nineteen years old, he first visited Huangshan Mountain and was deeply attracted by its scenic spots. He went to Huangshan nine times in his life and called himself "a man in Huangshan Mountain". He inherited the tradition of learning from nature of Huangshan School of Painting, and at the same time, he absorbed all the advantages of Chinese and Western painting. In his later years, his style changed from tranquil and elegant to thick and dignified, reaching the realm of forgetting both things and me and being at ease. He attached great importance to the study of the Huangshan School of Painting and edited the book The Origin and Origin of Huangshan Painters by himself. Whether in painting art or in academic research, Huang Binhong has further enriched and developed the "Huangshan Painting School", which is a well-known figure in modern Huangshan Painting School.

Wang Caibai, a fellow of Huang Binhong, was a landscape painter in the period of the Republic of China. He also has a deep study of the Huangshan School of Painting. He is good at painting the green mountains and waters of Huangshan Mountain. His style is fresh and lively. He has a picture album of Huanghai Recumbent Travel Collection, which has the characteristics of modern landscape painting. His works won the first prize at the International Art Fair in Paris.

(1865-1955), modern painter and scholar. She County, Anhui Province, was born in Jinhua, Zhejiang Province. The first name is Confucian, then renamed Confucian, the word is simple, the number is Binhong, other department to Xiang, Hongsao, Huangshan Zhongren. He is good at landscape painting and is a master of landscape painting. The intensive study of tradition goes hand in hand with the concern of sketching. Influenced by Xin'an School of Painting in his early years, he was characterized by dry brush, light ink, light and leisurely style, and was characterized by "Bai Binhong". After 80 years of age, he was characterized by thick black ink and bright black inside, which was called "Black Binhong". His painting style is graceful and graceful, and his artistic conception is profound. Occasionally, flowers, birds, weeds and insects are also peculiar. Besides painting, he also engaged in the research and teaching of painting history and seal carving. He was a professor of Hangzhou National Arts College. His works include A Textual Study of the Origin and Development of Huangshan Painters, A Talk on Honglu Painting, Essentials of Painting, etc.

Modern painter, art educator, famous plate, the word Jifang, Haiweng,. Han nationality, from Changzhou, Jiangsu Province, originated in Fengyang, Anhui Province. In 1912, he founded Shanghai Academy of Fine Arts with Wu Shiguang and Zhang Yuguang, and later changed to Shanghai Academy of Fine Arts as president. After 1949, he became president of Nanjing Academy of Art. Early learning oil painting, calligraphy Kang Youwei, ancient Shenxiong. As a Chinese painting, the lines have the strength of steel and iron. Later, he devoted himself to the ink-splashing method and danced with great boldness. In his later years, he used the splash-colored method, which had brilliant colors and vigorous temperament. He has been honorary Dean and professor of Nanjing Academy of Art and honorary chairman of Shanghai Artists Association. Consultant of China Artists Association. The Cambridge Center for International Heritage awarded the Outstanding Achievement Award. The Italian European Academy awarded the European Palm Gold Prize.