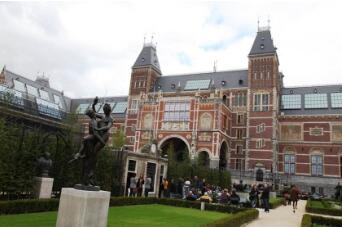 The Dutch National Museum in Amsterdam is the artistic masterpiece of Rembrandt, Weymer, Francis Halls and Jan Stern, the largest museum in the Netherlands. The most famous painting in the museum is undoubtedly Rembrandt's giant oil painting Night Patrol. In addition, the museum also displays many other fascinating treasures.

Famous European museums. Amsterdam Museum Square. The Dutch royal family set up the Royal Art Exhibition Room in The Hague in 1800 to prevent the loss of its collection. When Louis Bonaparte was King of the Netherlands, he moved to Amsterdam and increased his collection. In 1808, he established a museum. In 1885, a new Gothic-style museum was built, and the collections of guilds, dukes and citizens were collected. The Museum has more than 260 showrooms, including painting, sculpture, decoration, Dutch history, Asian art, printmaking and other departments. Among them, the painting department accounts for the largest proportion and is the core Department of the library. The paintings are mainly Dutch paintings in the 17th century, including Rembrandt's Night Patrol, Mother's Portrait, J. Vermeer's Letter-Watcher's Woman, Alley and F. Halls'outstanding works. From this we can understand the whole picture of the development of Dutch painting. Decoration technology departments include furniture, ceramics, metalware, glassware and dyed fabrics from 12 to 20 centuries in Europe. At the same time, there are scenes reflecting the life of Dutch people in the 17th century. In addition to introducing the historical relics of the Netherlands, the Dutch History Department also introduces furniture and various appliances in areas related to the Dutch East India Company, such as Africa, Malaysia, Indonesia and so on, from which we can see the development of the Dutch maritime trade. Asian art departments include Chinese porcelain, Japanese screens and swords, bronze statues of the Indonesian God Shiva, etc., which are all extremely valuable collections. The printmaking department has the most exquisite prints, sketches, coloured manuscripts and promotional paintings in Europe, including A. Dulle's works, Rembrandt's sketches and more than 1000 copperplate prints, Japanese Ukiyoshi paintings and so on.

The most famous museums are Amsterdam's National Museum and Van Gogh Museum, Rotterdam's Boymans-Van Berningen Museum, the Royal Painting Gallery of the Morris Palace in The Hague and the Royal Palace Museum in Appertoron. The following museums have a large collection of amazing modern art: Amsterdam. The Municipal Museum in Otterlo, the Crolmore Museum in Otterlo and the Van Abe Museum in Eindhoven; the government has funded museums of national significance, and is currently working to promote a single "Dutch Collection" campaign, bringing together a large number of scattered collections in order to avoid as much as possible. Repetition: Since 1990, the Netherlands has launched the Cultural Heritage Delta Project, which aims to restore and preserve important art collections. Museum collection and exhibition services have been further improved recently, attracting more visitors and strengthening the educational function of museums.

The National Museum was originally located on one floor of the Palace in the Dam District. It received a Linbran painting "Night Patrol" from the Municipal Government. In 1815, its collection moved to Qupeng Court on the canal in the city centre. However, the building could not accommodate a large number of gifts and collections, including the legacy of collector Hupi in 1854. Get "Jewish Bride" from Rembrandt.

The Gothic Cathedral Museum Building we see today was built in 1885. The museum's facade is decorated with Dutch historical and artistic images, facing the south of the museum square. It is stained glass mosaic, depicting the portraits of important figures in Amsterdam's cultural life.

Most of the national collections were originally placed in this labyrinth-like museum. After numerous renovations, they are now divided into five parts: painting, sculpture and decoration, Asian art, Dutch history and a printing room, covering the 15th and 19th centuries.