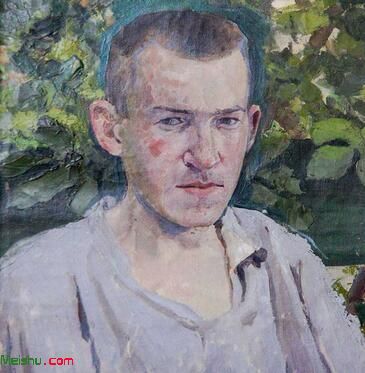 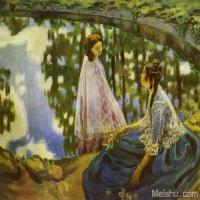 From Wikipedia, the free encyclopedia

Victor Musatov was born in  Saratov , Russia (he added the last name Borisov later). His father was a minor railway official who had been born as a  serf . In his childhood he suffered a spinal injury, which made him  humpbacked  for the rest of his life. In 1884 he entered Saratov  real school , where his talents as an artist were discovered by his teachers Fedor Vasiliev and Konovalov.

He was enrolled in the  Moscow School of Painting, Sculpture and Architecture  in 1890, transferring the next year to the  Imperial Academy of Arts  in  Saint-Petersburg , where he was a pupil of  Pavel Chistyakov . The damp climate of Saint-Petersburg was not good for Victor's health and in 1893 he was forced to return to  Moscow  and re-enroll to the Moscow School of painting, sculpturing and architecture. His earlier works like May flowers, 1894  were labelled  decadent  by the school administration, who sharply criticised him for making no distinction between the girls and the apple trees in his quest for a decorative effect. The same works however were praised by his peers, who considered him to be the leader of the new art movement.

In 1895 Victor once again left Moscow School of painting, sculpturing and architecture and enrolled in  Fernand Cormon 's school in  Paris . He studied there for three years, returning in summer months to Saratov. He was fascinated by the art of his French contemporaries, and especially by the paintings of "the father of French Symbolism"  Pierre Puvis de Chavannes  and by the work of  Berthe Morisot .

In 1898 Borisov-Musatov returned to Russia and almost immediately fell into what it is called "fin de siècle nostalgia". He complained about "the cruel, the truly iron age", "dirt and boredom", "devil's bog", and he had acute money problems that were somewhat alleviated only in the last years of his life when collectors started to buy his paintings. Musatov's response was creating a half-illusory world of the 19th century nobility, their parks and country-seats. This world was partially based on the estate of princes Prozorvky- Galitzines  Zubrilovka  and partially just on Musatov's imagination. Borisov-Musatov also abandoned oil paintings for the mixed  tempera  and  watercolor  and  pastel  techniques that he found more suitable for the subtle visual effects he was trying to create.

Borisov-Musatov was a member of the  Union of Russian Artists  and one of the founders and the leader of the  Moscow Association of Artists , a progressive artistic organization that brought together  Pavel Kuznetsov ,  Peter Utkin ,  Alexander Matveyev ,  Martiros Saryan ,  Nikolai Sapunov , and  Sergei Sudeikin .

The most famous painting of that time is  The Pool, 1902 . The painting depicts two most important women in his life: his sister, Yelena Musatova and his bride (later wife), artist Yelena Alexandrova. The people are woven into the landscape of an old park with a pond.

Another famous painting is  The Phantoms. 1903  depicting ghosts on the steps of an old country manor. The painting was praised by the contemporary Symbolist poets  Valery Bryusov  and  Andrey Bely .

In 1904 Borisov-Musatov had a very successful solo exhibition in a number of cities in  Germany , and in the spring of 1905 he exhibited with  Salon de la Société des Artistes Français  and became a member of this society.

The last finished painting of Borisov-Musatov was  Requiem . Devoted to the memory of Nadezhda Staniukovich, a close friend of the artist, the painting may indicate Borisov-Musatov's evolution towards the  Neo-classical style.

Borisov-Musatov died on October 26,  O.S.  1905 of a  heart attack  and is buried on a bank of  Oka River  near  Tarusa . On his tomb there is a sculpture of a sleeping boy by Musatov's follower  Alexander Matveyev . 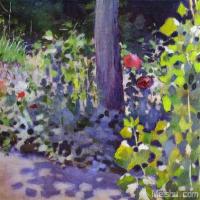 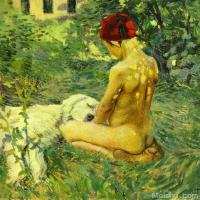 Borisov was born in Saratov (he added that Russia's last name after Borisov). His father was a small railway official who was born as a serf. In his childhood, he suffered a spinal cord injury, which made him the rest of his life. 1884 he entered the real school in Saratov as an artist, his teacher Vasiliev and Konovalov found his talent, Fedor.

He was enrolled in the Moscow School of painting, sculpture and architecture 1890, moved to Royal College of Art next year to enter St Petersburg, where he was a student of Pavel Chistyakov. Saint Petersburg of the humid climate, not for Victor's good health, he was forced to return to Moscow in 1893 and re registered for the Moscow School of painting, sculpture and architecture. His early works, the lucky flower, 1894 marked the decadence of the school management, and he severely criticized him for making no distinction between the girl and the apple tree he was seeking a decorative effect. The same job was praised by his peers, who thought he was the leader of the new art movement.

1895 Victor once again left the science of painting, sculpture and architecture into the Paris School of Fernand Cormon. He studied there for three years, returning home in the summer months, Saratov. He was fascinated by his French contemporary art, especially painting "the father of French Symbolism" through the work of Belt Morisot Pierre Pivi de Havana.