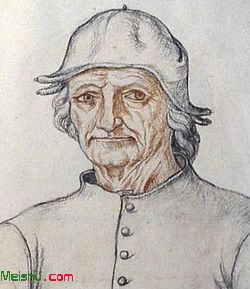 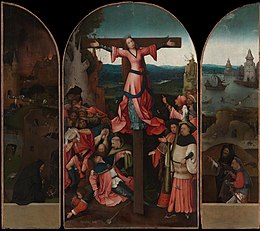 Hieronymus Bosch was born Jheronimus (or Joen,respectively the Latin and Middle Dutch form of the name "Jerome") van Aken (meaning "from Aachen"). He signed a number of his paintings as Jheronimus Bosch.The name derives from his birthplace, 's-Hertogenbosch, which is commonly called "Den Bosch" ('the forest').

Little is known of Bosch's life or training. He left behind no letters or diaries, and what has been identified has been taken from brief references to him in the municipal records of 's-Hertogenbosch, and in the account books of the local order of the Illustrious Brotherhood of Our Blessed Lady. Nothing is known of his personality or his thoughts on the meaning of his art. Bosch's date of birth has not been determined with certainty. It is estimated at c. 1450 on the basis of a hand drawn portrait (which may be a self-portrait) made shortly before his death in 1516. The drawing shows the artist at an advanced age, probably in his late sixties.

Bosch was born and lived all his life in and near 's-Hertogenbosch, a city in the Duchy of Brabant. His grandfather, Jan van Aken (died 1454), was a painter and is first mentioned in the records in 1430. It is known that Jan had five sons, four of whom were also painters. Bosch's father, Anthonius van Aken (died c. 1478), acted as artistic adviser to theIllustrious Brotherhood of Our Blessed Lady.[10] It is generally assumed that either Bosch's father or one of his uncles taught the artist to paint, but none of their works survive.[11] Bosch first appears in the municipal record on 5 April 1474, when he is named along with two brothers and a sister.

's-Hertogenbosch was a flourishing city in 15th-century Brabant, in the south of the present-day Netherlands, at the time part of the Burgundian Netherlands, and during its lifetime passing through marriage to the Habsburgs. In 1463, 4,000 houses in the town were destroyed by a catastrophic fire, which the then (approximately) 13-year-old Bosch presumably witnessed. He became a popular painter in his lifetime and often received commissions from abroad. In 1488 he joined the highly respected Brotherhood of Our Lady, an arch-conservative religious group of some 40 influential citizens of 's-Hertogenbosch, and 7,000 'outer-members' from around Europe.

Sometime between 1479 and 1481, Bosch married Aleyt Goyaerts van den Meerveen, who was a few years his senior. The couple moved to the nearby town of Oirschot, where his wife had inherited a house and land from her wealthy family. An entry in the accounts of the Brotherhood of Our Lady records Bosch's death in 1516. A funeral mass served in his memory was held in the church of Saint John on 9 August of that year.

Bosch produced at least sixteen triptychs, of which eight are fully intact, and another five in fragments. Bosch's works are generally organized into three periods of his life dealing with the early works (c. 1470–1485), the middle period (c.1485–1500), and the late period (c. 1500 until his death). According to Stefan Fischer, thirteen of Bosch's surviving paintings were completed in the late period, with seven surviving paintings attributed to his middle period. Bosch's early period is studied in terms of his workshop activity and possibly some of his drawings. Indeed he taught pupils in the workshop, who were influenced by him. The recentdendrochronological investigation of the oak panels by the scientists at the Bosch Research and Conservation Projectled to a more precise dating of the majority of Bosch's paintings.

His most famous triptych is the The Garden of Earthly Delights (c. 1495–1505) whose outer panels are intended to bracket the main central panel between the Garden of Eden depicted on the left panel and the Last Judgment depicted on the right panel. It is attributed by Fischer as a transition painting rendered by Bosch from between his middle period and his late period. In the left hand panel God presents Eve to Adam; innovatively God is given a youthful appearance. The figures are set in a landscape populated by exotic animals and unusual semi-organic hut-shaped forms. The central panel is a broad panorama teeming with socially engaged nude figures seemingly engaged in innocent, self-absorbed joy, as well as fantastical animals, oversized fruit and hybrid stone formations.

The right panel presents a hellscape; a world in which humankind has succumbed to the temptations of evil and is reaping eternal damnation. Set at night, the panel features cold colours, tortured figures and frozen waterways. The nakedness of the human figures has lost any eroticism suggested in the central panel,as large explosions in the background throw light through the city gate and spill onto the water in the panel's midground.

Bosch sometimes painted in a comparatively sketchy manner, contrasting with the traditional Flemish style of painting in which the smooth surface—achieved by the application of multiple transparent glazes—conceals the brushwork.

Bosch's paintings with their rough surfaces, so called impasto painting, differed from the tradition of the great Netherlandish painters of the end of the 15th, and beginning of the 16th centuries, who wished to hide the work done and so suggest their paintings as more nearly divine creations.