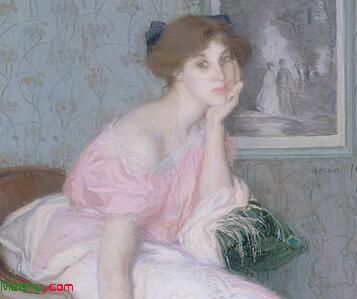 He was born at Chevry-Cossigny, a small village at the juncture of the Seine and Marne rivers, about three miles outside of Paris in his day. He began his art studies with Henri Lehmann at theÉcole des Beaux-Arts in 1880; he later studied under Pierre Puvis de Chavannes. Later he became an important teacher in his own right; his students included Charles Sydney Hopkinson, Theodor Pallady, and Nicolae Tonitza. The writer and playwright François Aman-Jean was his youger brother.

Aman-Jean established his reputation primarily for his portraits, especially of female subjects; he was also noted for his murals in public and official buildings, including the Sorbonne. Like many French artists of his generation, he was influenced by the new perspectives on Japanese art current in Paris in his day; more unusually, Aman-Jean was interested in the Pre-Raphaeliteartists in England.[2]

Aman-Jean was a close friend of Georges Seurat;[3] the two artists shared a Paris studio in 1879. Art historian Robert Herbert called Seurat's portrait of Aman-Jean, "one of the great portrait drawings of the nineteenth century".[4] It was the first work Seurat showed, at the Paris Salon in 1883. Aman-Jean also associated with a range of artists and cultural figures of his era, from Ernest Laurent to Paul Verlaine.

Aman-Jean also worked in lithography and printmaking and designed posters.