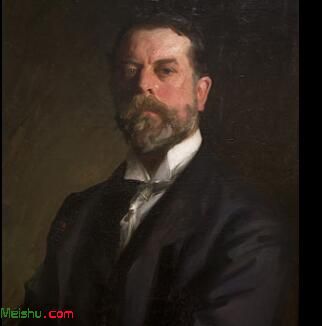 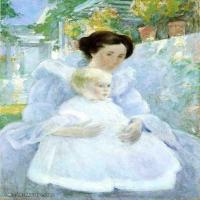 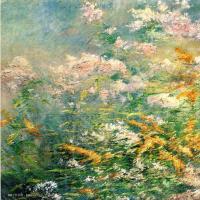 Fanny Watts, Sargent's childhood friend. In 1877, before the first salon in Paris, Philadelphia Museum of art painting Sargent was born, his father Fitz William (B. 1820 Gloucester, Massachusetts, is an ophthalmologist at Wills Eye Hospital in Philadelphia from 1844 to 1854. After John's sister died at the age of two, his mother, Marie, suffered a break, and the couple decided to go abroad to recover. They keep nomadic expatriates to rest for their lives. While based in Paris, Sargent's parents moved regularly with seasonal sea and mountain resorts in France, Germany, Italy and switzerland. Although Marie was pregnant, they stopped in Florence, Tuscany because of the cholera epidemic. Sargent was born in 1856, a year later, his sister, Marie, was born. After her birth, Fitz William reluctantly resigned from his position in Philadelphia and received his wife to stay abroad. They lived modestly in a small inheritance and savings, lived a quiet life with their children. They usually avoid society and other Americans in addition to friends in the art world. Four more children born abroad, only two of them survive childhood.
Although his father is a basic subject of patience with the teacher, young Sargent is a rude child, more interested in his study of outdoor activities. As the father wrote home, "he was animated by a pretty close observation of nature." His mother is very confident that traveling around Europe, visiting museums and churches will give young Sargent a satisfactory education. Many attempts to get him to accept a formal education failure, mainly due to their mobile life. Sargent's mother was a good amateur artist and his father was a skilled medical illustrator. In the early days, she gave his sketchbook, and encourage drawing tour. Sargent and nursing young in his paintings, he enthusiastically copied images from the Illustrated London News ship, and puts forward the detailed landscape sketch. William had hoped that his son's ship and maritime rights could lead him to a naval career.
At the age of thirteen, his mother reported that John "sketches quite well, with extremely fast and right eyes. If we have the ability to give him a really good lesson, he will soon be quite a little painter." At the age of thirteen, he received a number of watercolor painting lessons from Carle, German landscape painter. Although his education was far from complete, Sargent grew up to be a very educated and cosmopolitan young man, in art, music and literature. He speaks fluent French, Italian and german. At the age of seventeen, Sargent was described as "deliberate, confident, determined and strong" (his mother) also shy, generous, gentle (his father). He also met a lot of masters, from first hand observation, because he wrote in 1874, "I have been in Venice to appreciate the great Tintoretto, and that he may be behind Michelangelo and titian."
El Nino (Spanish Dancer), C racket. From 1879 to 1882, the Isabella Stuart Gardner Museum in 1879, 23 year old Sargent portrait painting teacher Carolus Duran; performers strive to meet the public approval, and announced his mature work will take the direction. It shows that the salon in Paris is due both to his teacher and the portrait of the Commission ad. In early works, Sargent Henry James wrote, "the little artist with a" bizarre "spectacle, in the very threshold occupation career has no more understanding. "
Leave the Carolus Duran studio after Sargent's visit to spain. There, he studied painting Velazquez and passion, absorbing master technology, and gather in his journey to the idea for future work. He was fascinated with Spanish music and dance. This trip has rekindled his musical talent (which is almost equal to his artistic talent), and found that visual expression of El Nino racket in his early representative (1882). Music will continue to play an important part in his social life as well, as he is skilled in the accompaniment of amateur and professional musicians. Sargent became a modern composer, especially to advocate for Gabriel Faure. Italy Venice tourism street provides sketches and schools of thought, paintings, so as to effectively capture gestures and postures, he will find in later portraits is useful. In his return, Sargent soon received several portrait commissions. His career officially started. He proved at once that he was able to work as well as a worker with 25 years of concentration and endurance. He fills the gap between the Commission with friends and colleagues with a lot of non commissioned portraits. His gentle manners, perfect French, and superb skill made him a new portrait painter, and his fame spread rapidly. He confidently set high prices and refused to be dissatisfied with the nanny. He directed his friend Emil Fox who in the portrait in oil.