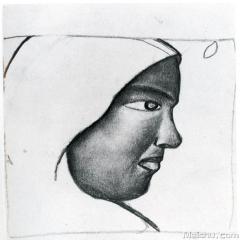 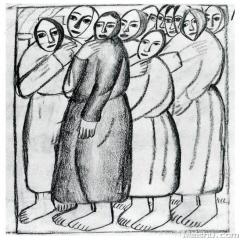 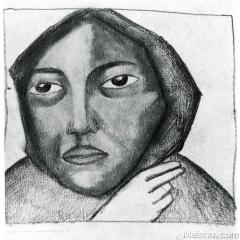 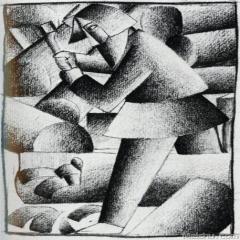 Kazimir Malevich was born to the family of Kazimierz Malewicz Poland, [7] [8] [9] of the Russian Empire who settled near Kiev in Kiev province in the partition of Poland. [10] his parents, Ludwika and Seweryn Malewicz, are ethnic poles in Rome Catholic love [1], although his father attended too orthodox service. [11] the two of them came from the Commonwealth (the former eastern territories of today's Kopyl region fled to Belarus) Kiev in the aftermath of the defeat of the Poland uprising in January 1863 against the Czar's army. [12] his mother tongue is polish, although he said Ukraine [7] [11] in front of the public. Later, he even wrote a series of articles about the art of Ukraine. [11]
Father Kazy the sugar factory management. Kazy is the oldest of fourteen children in [10], only nine people survived to adulthood. His family often moved, he spent most of his childhood in a village in Ukraine, a beet plantation, away from the cultural center. Until he was twelve years old, he knew nothing about the professional artist, but art had surrounded him in childhood. He likes to embroider the farmers and decorate the walls and the stove. He can draw in the farmhouse. He was drawn in Kiev from 1895 to 1896.
When Malevich died of cancer at the age of 57 in May 1935, 15 in Leningrad, his friends and disciples buried his ashes in the black box marked with serious. Abstract form they did not fulfill his wishes and established his skyscraper "architekton" topped the whole design sketches of serious, equipped with a telescope, through which visitors stare at jupiter. [24]
On his deathbed Malevich has exhibited a black square above him, and was allowed in his funeral gathering of mourners waving flags with a black square. [21] Malevich asked under the oak tree was buried on the outskirts of Nemchinovka, a place where he felt a special bond. [25] his ashes were sent to Nemchinovka, buried in a nearby village villa. Nicola Suetin, Malevich's friends and fellow artists, design a white cube with the burial place of black squares mark. To commemorate the destruction during World War ii. Leningrad city to Malevich's mother and daughter pension.
In 2013, the apartment building built in the tomb and Kazimir Malevich burial place. Other monuments near Malevich, proposed in 1988, is now located on the grounds of a gated community.From 1896 to 1904 Kazimir Malevich in Kursk. In 1904, after his father died, he moved to moscow. He studied in the painting, sculpture, and architecture of the Moscow academy from 1904 to 1910, and at studio Fedor Rerberg in Moscow (1904 to 1910). In 1911, he participated in the second exhibition group, Molodyozhi Alliance (Youth League) of St. St Petersburg, together with Vladimir Tatlin, and in 1912, the group held third exhibitions, including the works of Alexandra Ekster, Tatlin, etc.. In the same year, he was taken to the donkey's tail in moscow. By then his works were influenced by Natalia Tsalova and Mikhail Larionov, the Russian avant-garde painter, who was particularly interested in Russian folk art. Malevich described himself as being painted in a "cube futuristic" style at the 1912 [14] in, a large exhibition of Aristarkh Lentulov in moscow. The exhibition effect compared with Cezanne in Paris on 1907, as time (including Malevich) all major Russian avant-garde artists immediately absorbed the principle of cubism in their works, they began to use. The sun beat early in the same year, set in a futuristic cube opera, Malevich stage, became a huge success. 1914 Malevich exhibited his works independent salon in Paris with Alexander Archie, Sonia Delaunay, Alexandra Ekster and Vadim Mailer, etc.. [source] request Malevich together said, with Pavel Filonov, and postscript poems, from 1907 to 1914 by velimir Khlebnikov and in 1914 by Khlebnikov another work called roar! Hand, from 1908 to 1914, and Vladimir BURLIUK.Black, his version of the fourth representative painting in 1920s, was discovered in 1993 in Samarra and the purchase of Inkombank US $250000. The auction of this work in April 2002 was equivalent to $1 million. The acquisition was funded by Russian philanthropist Vladimir Potanin, who donated to the Russian Ministry of culture, and ultimately to the national Winter Palace Museum collection. According to the Winter Palace site, which is the largest private contribution to the National Art Museum of the October revolution.
November 3, 2008 Malevich entitled work oriented components, set any Russian art auction this year work and any work from 1916 world record sales in Sotheby's in New York city just over $US $5 billion 900 million (more than 17 million sets of his former American record in 2000 $).
Malevich's life has inspired many reference events and painting players. Malevich paintings smuggled out of Russia is the key writers Martin Cruz Smith plot line thriller Red Square. Noah Charney's novel, tells the story of two art thieves stolen Malevich white story in white paint, and discussed the influence on radical supremacy of the composition of the art world of malevich. The British artist Keith Coventry Malevich works with modernism views, especially his painting village. Malevich also works in Lars von Trier film, highlighting the characteristics of depression.
In 1911 BrocardCo. production called Cologne Severny Hotel, and packaging and labelling by Malevich design. Cologne made until early 1990s.