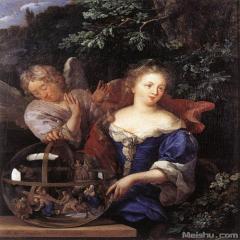 Van der Neer was born in Amsterdam, is likely to be the first taught by his father, AERT van der Neer, who married in 1629 in Amsterdam, Gorinchem in the future. Eglon there are at least five siblings, who were 16401650 years of baptism, in the new church he took lessons between Jacob van loo, who was one of the most important figure painter in Amsterdam.
Around 1654, van der Neer, who may have just completed his education to van loo, orange, vaucluse in southern France, enter Dohna von Friedrich (1621 to 1688), the governor of the Principality of orange service. Van der Neer stayed in for three or four years and returned to Amsterdam by the end of where he married (February) Maria Wagensvelt, a wealthy daughter of the Rotterdam notary. In 1663, van der Neer and his family moved to Rotterdam, where Dean van der Werff became his student. He stayed in Rotterdam until his wife died in 1677. He moved to Hague in 1679. In 1680 he became a member of Confrerie Pictura there. Later that year, he moved again, taking up his residence in Brussels, where he married a miniature painter Marie Du CHASTEL in the following year. She gave birth to nine children.
In Brussels, van der Neer and established Holland in Spain, the Marquis of Castanaga governor good relations. In 1687, van der Neer was appointed court painter of the Spanish king Charles S of spain. In 1689, when Carlos's first wife died, one of van der Neer wedding ceremony depicting the candidate, Anna Maria of neuburg.
In 1695, John William, the Elector of the court bought a painting by van der Neer of Rotterdam, traveling through Holland. The picture must have been pleased with him, for soon after the elector's court directly contacted van der Neer, giving him the commission. In the same year Brussels was der by the French army and van Neer began looking for another place to start a new life bombing. Elector palatine has been looking for since his last court painter to replace Johannes Spilberg in 1690 van der Neer's second wife had died at 1692 dead, he met the daughter of Spilberg, he is a qualified painter, Adriana Spilberg. They were married in 1697, and in 1698 John William presented van der Neer's position as a head painter in his court. Van der Neer settled in Dusseldorf and stayed there for the last few years of his life.

During his time in Amsterdam and Rotterdam, van der Neer's main painting genre scenes and portraits reveal an astonishing variety of styles. The performance of his indoor scene was influenced by Peter de Hoche, Gerrard's three Bo Chuang, and van Mieris of. Van der Neer's only mythological and biblical scenes are numbered. Early examples are very similar to his style scenes and figures in contemporary interior design exhibition. Later, in Brussels and Dusseldorf, van der Neer set his historical scene outdoors, with landscape environment. In these paintings, he followed the example of Adam Elsheimer. His pure landscape, not from the source of literature data, shows the influence of other styles, such as Yang Bruegel elders, and Jacques de Arthois. Most van der Neer's paintings are small, his style is highly finished. However, he can work on a large scale, and then will adjust his painting style.