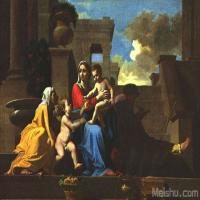 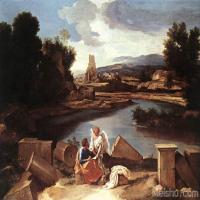 Nicholas Poussin (Nicolas Poussin 1594-1665) is an important period of the seventeenth Century French Baroque painter, seventeenth Century is the founder of French classical painting. He advocates the Renaissance master Rafael, Titian, engrossed in the research of cultural heritage in Rome, greece. Most of Poussin's works are based on mythology, history and religion. The picture is small, but well, to strictly sketch and perfect composition. "Arcadia" is an important representative of the shepherd.
Poussin was born in the west of Normandy, France, in the home of a small family of soldiers in the army of Lysander Leigh. His family was poor, his father wanted his only son to become a lawyer, but his son was fascinated by painting.
Poussin at a young age had pored over Greece, Rome literature and art in Renaissance masters of poetry, mathematics, anatomy and perspective on the day after he learned, emphasis on rational classical art foundation. At the age of 18 met to hometown church to paint field painter Quentin card, strengthened his determination to study painting, and soon came to Paris entry in Dignan El's studio, met 8 years younger than him. Luxemburg and Jerome painter, painting. At the age of 29 for the Notre Dame de Paris painting "Santa Maria" sleeping style, bright, elegant and well received. During this period, Marino met Italy poet, illustrated and the poet's poetry, in the poet's influence, he decided to go to Rome to Italy, then just thirty years of age. After the age of 30 Poussin art activities in Rome. The spring of 1624, the first artist to Venice, and then came to Rome, he carefully studied the art of ancient Rome and the works of Rafael, Bologna academic art also gave him great inspiration. This period of creation, both Baroque tendencies, and Titian's color, but also with the school of shadows. The 36 year old artist gave birth to a serious illness, thanks to a baker family care and rehabilitation after illness, married 18 years younger than him Baker's daughter, lived a quiet family life and art creation.
Vigorous period from 1630 to 1640 is the vigorous period of Poussin's creation. Poussin is the classical rational control, the classical beauty of form to use their own creation, he often in the process of creation and control their emotions, not to let the people to move, and try to get the picture of harmony, unity, solemn, elegant and perfect. He created the "goddess" and she Satir, "kingdom", "flora of Arcadia shepherds" and a series of excellent works. The "Arcadia shepherds" is a calm and philosophical works, the 3 shepherds identification on a tombstone inscription in the difficult: "I have lived in arcadia...... "(Arcadia is the Greek legend of the paradise) in which a young shepherd asked to gaze at a symbol of good fortune. The painter to express the paradise of death, the happiness of life is very fragile and nature is the eternal melancholy thoughts.

In 1640, Poussin Louis was invited back to France in thirteen, served as chief court painter, and led the palace decoration work. But other painters hostile and non cooperation make him leave in anger. In 1642, he left France for Italy, never to return to Paris. In 1642, Poussin returned to Rome, not just the pursuit of honor, painstaking exploration in the art of painting, world without end on the road, the creation of "seven sacraments", "Solomon judgment", "Rebecca" and the history of landscape painting "Fu Rong's funeral", "four seasons" series, these are his last 20 years of life to create a masterpiece, which is about "four seasons" is beyond the meaning of traditional painting language.
In 1660s, Poussin was in his late years, gradually lost the ability to paint, in his letter to friends, said: "I did not spend a day without pain. "God promised me that I was going to go," he said, "because the torture of life is too heavy for me. "The 71 year old master died in Rome in November 19, 1665.
It is said that in his anecdotes, exuberant period often with his friend to the outskirts of Rome travel, nostalgia, the creation of some emotional elegant religious and mythological tales and literary themes of the paintings, many of his masterpieces were created in this period.
46 year old Poussin received the invitation letter Louis thirteen and Prime Minister Richelieu, the chief court painter and paid him back to Paris for the royal service, received a warm reception in the palace, luxurious residence, but lost the art of unfettered freedom of writing, he said "like a noose set in his neck. On". The court etiquette, the despotic system and the command, the colleague's jealousy and the plot and so on have cut off his artistic wing, this caused him to regret very much to return to china. He said: if I stay in this country, I will become a bad painter. Always stand by 1642 Prime Minister Richelieu died, he took the opportunity to leave back to Rome to visit sick wife, right, never go back to Paris this, and his wife as partners, not for fame and fortune, he returned to painting, the crane cloud free life. The painter concentrates much on the creation of landscape painting. At the age of 62 he also rejected Rome's director of the St. Luke's college.
The appreciation of Poussin's works of art, he decided to choose some of the "lofty style" of the painting theme, he painted the characters are in accordance with the Greek, Rome carved image to shape. He believes that the value of these images, is in line with a "model", so he painted characters never come from real life. "Arcadia" Arcadia shepherds "shepherd"
Good shepherd this Arcadia a famous "Arcadia" shepherd meaning more obscure, hard work is always too profound to be understood in the history of art. "Arcadia", which is a type of ancient legends of the "land of idyllic beauty". Picture show a quiet desert, the warm sunshine in only a few tree trees rusty graveyard; the background is a clear blue sky. Four shepherds, wearing a crown, each with Crozier, gathered in front of a tombstone with the inscription in the study. A moustache shepherd kneeling monument inscription read, and turned to a woman on the right side of the Shepherd said what, stone on the Latin inscription: "even in Arcadia is also my. "
According to the interpretation of art historians, where "I", refers to "death". The inscription seems to mean that: "in the beautiful paradise, death is inevitable. "Obviously, this is a kind of" scenery is good, life is short "sigh. From the expression of the shepherd on the left side of the tomb, he looked down, as if he were in the mood of nostalgia, and contrasted with the shepherd standing on the left. The shepherd girl in yellow blue skirt, is the most prominent color painting jump. The image of the female people guess, it is said that she is a symbol of a better life. Although she has a jaw down, quietly listening to the inscription, but gives a sense of comfort. Doubts and comfort, melancholy and grief, around a philosophy of life, let people think firmly. There is a vivid contrast between the male and female shepherds. It seems that in the direction of the viewer said: "it is a fear of death? After all, the yearning of the world. "
This idyllic mood sad reality, to a certain extent, reveal the artist at situation and vision of art. The characters are dressed in Greek style. He always regards the image as the sublime expression of art. But for westerners, perhaps can really nostalgia.