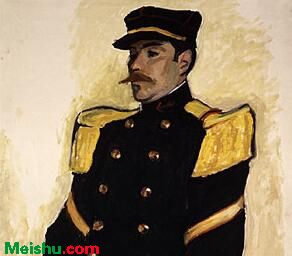 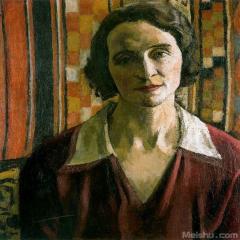 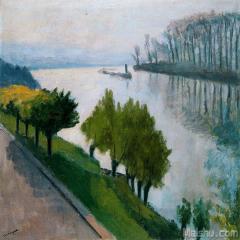 Life and work
Marquet was born in 1875 at Bordeaux. In 1890 he moved to Paris to attend the Ecole des Arts Decoratifs, where he met Henri Matisse. They were roommates for a time, and they influenced each other's work. Marquet began studies in 1892 at the École des Beaux-Arts under Gustave Moreau, a symbolist artist who was a follower of the Romantic tradition of Eugène Delacroix.

In these years, Marquet exhibited paintings at the Salon des Indépendants. Although he did not sell many paintings, the artistic community of Paris became aware of his work. His early compositions were characterised by a clear and painterly Fauvist approach, in which he had a fine control of the drawing and responded to light, not only by intensifying the strongest tones, but also by seeing the weaker ones in coloristic terms.

In 1905 he exhibited at the Salon d'Automne[1] where his paintings were put together with those of Henri Matisse, Maurice de Vlaminck, André Derain, Othon Friesz, Georges Rouault, Raoul Dufy, Henri Manguin, Georges Braque, Louis Valtat, Georges Dufrénoy and Jean Puy. He became a lifelong friend of Matisse.[2]

Dismayed by the intense coloration in these paintings, critics reacted by naming the artists the "Fauves", i.e. the wild beasts. Although Marquet painted with the fauves for years, he used less bright and violent colours than the others, and emphasized less intense tones made by mixing complementaries, thus always as colors and never as grays.

At the end of 1907 he stayed in Paris and dedicated himself, together with Matisse, to a series of city views. The fundamental difference between the two is that while Matisse used strong colours, Marquet favored grayed yellows, greyed violets or blues. Black was usually used as a violent contrast to light colors for such forms as bare tree trunks or calligraphically drawn people contrasted with very light, often yellow or orange streets and sidewalks. Another difference is that Marquet used an approximation of traditional perspective, although his colors and compositions constantly referred to the rectangle and cut its plane with their calligraphy.

From 1907 to his death, Marquet alternated between working in his studio in Paris and many parts of the European coast and in North Africa. He was most involved with Algeria and Algiersand with Tunisia. In his voyages he painted the sea and ships, but also the lights and animated life of the city, especially cities on the waterfront, like Algiers.

Among European cities Marquet remained impressed particularly with Naples and Venice where he painted the sea and boats, accenting the light over water. He adopted a technique nothing like the Impressionists', painting water as a large area of simple tone which held the plane of the water surface without illusionistic perspective, from which the ships arise into a different plane. His views of the lagoon in Venice do this very economically. The water stays at a right angle to the picture plane and the large ships float with ease, with their reflections exactly the correct tone to project the required space. His color is much like Matisse of the 1920s, here. His contrasts of vivid colors describe the waves of the sea with simple drawing which accompany the exactly observed color tones, giving a scene of placid movement. The human figures are much simplified, calligraphically drawn in a way related to Japanese Shijo style work. Matisse said, "When I look at Hokusai, I think of Marquet—and vice versa ... I don't mean imitation of Hokusai, I mean similarity with him".[3] 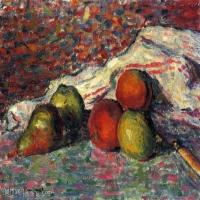 During his voyages to Germany and Sweden he painted the subjects he usually preferred: river and sea views, ports and ships, but also cityscapes. Over the course of his career he often returned to the same subjects, even years later, recording subtle differences in the light. He painted a few portraits, and between 1910 and 1914 he painted a series of nudes[2] in whorehouses, and prepared the illustration of a work on lesbian lovers. But he is best known for his many landscapes.[4][5]

Unlike Matisse, there are no obvious periods of change in his work. As one of Matisse's closest friends, they discussed each other's work with the greatest openness. Marquet's death was unexpected and sudden, from a gall bladder attack and subsequently discovered cancer, for which at that time there was no therapy. He died in La Frette-sur-Seine, on 14 June 1947.

Legacy
Although he notes that Marquet is conventionally regarded as a minor painter, the English painter John McLean is among those who consider that "his feeling for colour, the lightness or darkness and saturation of it, its weight, is nothing less than astounding."[6]

Marquet was particularly revered by the American painters Leland Bell and his wife Louisa Matthiasdottir. He was also revered by Bell's contemporaries Al Kresch and Gabriel Laderman. Since both Bell and Laderman were teachers in several American art schools, they have had an influence on younger American figurative artists and their appreciation of Marquet.[7]