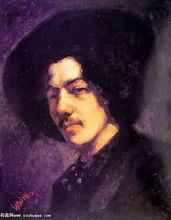 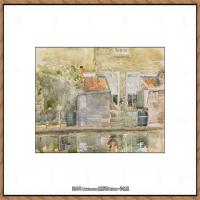 In his early years, he went to West Point Military Academy and worked as a surveying and mapping artist. After that, he received training in white sketch and copperplate printmaking. He went to Paris in 1855 and never returned to the United States. In France, he formed a trio with young painters H. Fontaine-Latour and A. Legro. Settled in England in 1859. The style of painting is influenced by D. Velasquez. The masterpieces "By the Piano" and "The Girl in White" have caused a sensation. In her later years, her works pursued Oriental interest. The girls in the painting often wore Japanese kimonos and put on several pieces of Chinese porcelain. In 1892, his retrospective exhibition of works made him recognized by the American public as an American painter who accidentally lived in Britain. Britain chose him as the chairman of the British Artists Association. Not long after, France awarded him the title of Knight of the Legion of Honor.

When Whistler was 3 years old, his father retired as a road engineer for the Western Railway and his family moved to Stonington, Connecticut. In 1841, at the invitation of Czar Nicholas I, his father went to Russia to work for the construction of the railway from Petersburg to Moscow, and his family moved to Petersburg. In 1849, Whistler's father died of illness in Russia, and his mother moved back to Stonington in the United States. In 1851, Whistler was admitted to West Point, a famous military academy in the United States, in compliance with his mother's request that he inherit his father's ambition. However, due to lax discipline, he was rejected by the school in the third grade. He had asked Army Secretary Jefferson Davis to help him resume his studies, but Davis introduced him to the Director of Mapping, Benheim. The captain discovered his talent for painting and hired him in 1854. But drawing maps and drawing are two different things. Benheim soon found out what made him headache. Almost every map passed by Whistler's hand was filled with strange heads and animals. He had to dismiss the young man. It is said that Whistler worked under him for 12 hours and 15 minutes. In the summer of 1855, Whistler finally got the chance to study painting in Paris. He studied sketch and oil painting in Grail's studio and copied ancient paintings at the Louvre Palace. In the summer of 1858, he traveled around France and painted a group of copperplate "French Paintings" with an alien eye, which was very popular. Later, he joined Henry La Fontaine in a group of young painters led by Kulbey and began to associate with impressionist painter Monet and others. In 1859, his graduation work "By the Piano" was rejected by Sharon, and he left France in anger and left London. Since then, his paintings have been combined with music titles. For example, "Portrait of Mother" is called "Concerto of Gray and Black", "Girl in White" is added with the subtitle of "White Symphony" and so on. This painting "Rose and Silver: Princess for Porcelain Production" also has the name of "Symphony of Rose and Silver". Whistler did so to emphasize the association between color and music. At the same time, he is also deeply interested in the decorative techniques of Japanese Ukiyo and screen paintings. In this painting, the model is dressed in a nondescript "kimono", holding a fan, in order to pursue the style of Japanese beauty painting. The pattern on the carpet and screen is also full of Chinese style. There is also an oriental vase, which points out the theme of "Princess of the Country of Producing Porcelain".

Whistler's wild and unrestrained character had a slight convergence as he grew older. In 1872, he wrote family portraits and interior murals for the owner of Liverpool's ship, Leland. He procrastinated, forcing Leland to pay more and more. The dialogue between Leland and the painter became popular because of Whistler's witty humor. Lastly, Leland paid twice as much for Whistler's murals.

His lawsuit with the famous critic John Ruskin in 1875 is also a good story in the history of world painting. Ruskin and Oscar Wilde visited an important exhibition with Whistler's works. They were dissatisfied with the painter's "Fireworks on the Thames: Serenades of Black and Gold". This is an oil painting sprinkled with irregular spots on the black ground. Ruskin believes that it is a deception to knock the paint can over on the canvas and pay the audience. Whistler sued Laskin in London White District Court for insulting his reputation. The court found him guilty, but only paid a fine of ten pence. This humourous joke mediated the quarrel between two famous literati, but Whistler was empty to pay half the litigation fee.

In 1855, he entered the private book school in Paris and moved to London in 1859. Influenced by Spanish painters'painting style, Greek sculpture, pre-Raphaelian school and Japanese art, he created a unique artistic style. Whistler not only painted landscapes, but also customized portraits with unique names combined by color and musical terms, which showed that his intention was not to narrate the story or to create a unique artistic style. The reappearance of reality, but in these completely different fields, has his artistic subject, especially the power of color occupies an important significance.