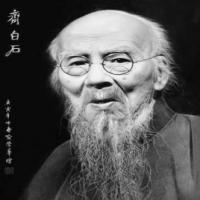 In his early years, he worked as a woodworker, then sold paintings for a living, and settled in Beijing after he was 57 years old. In 1955, he was awarded the International Peace Prize by the World Peace Council. On the 100th anniversary of his birth in 1963, he was presumed to be a world cultural celebrity. In his lifetime, he painted endlessly, leaving behind a large number of poems, books, paintings and printed works. The paintings handed down from generation to generation include "Ink Shrimp", "Cattle Grazing Picture", "Frog Sound Ten Miles Out of Mountain Spring" and so on. He is good at painting flowers, birds, insects, fish, landscapes and figures. His brush and ink are vigorous and moist, with rich and bright colors, concise and vivid shapes and simple artistic conception. The fish, shrimp, insect and crab are interesting.