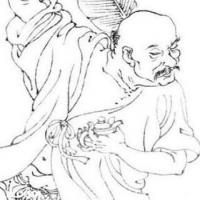 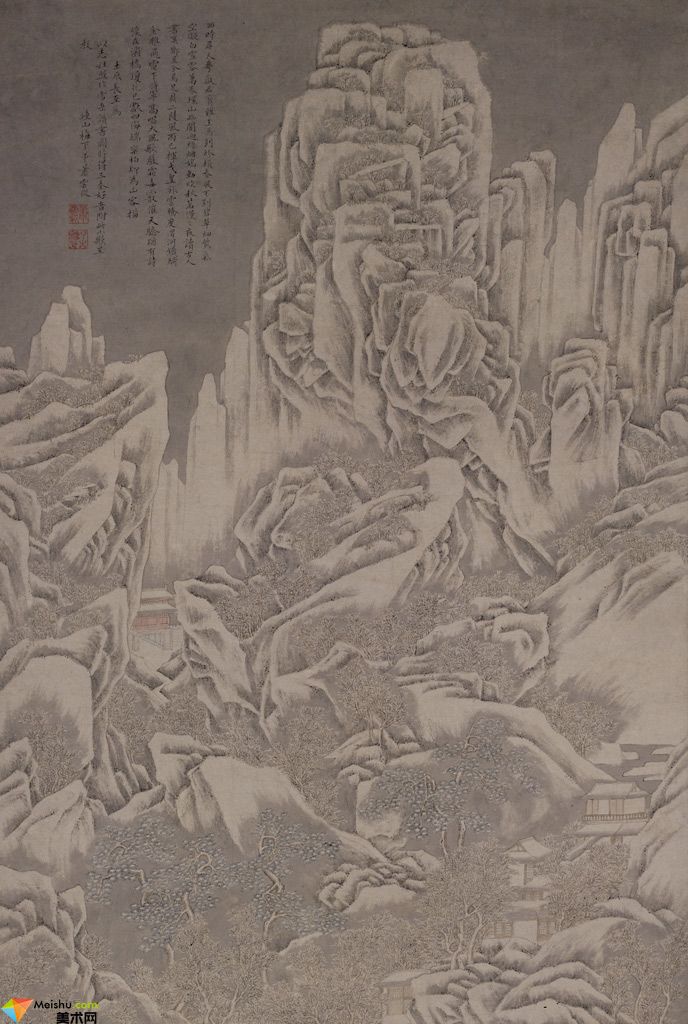 This is a seven-character poem with a section: "Renchen Changzhi makes Xueyue reading maps for even the association. At that time, I got the good voice of Sanqin Dynasty, accompanied by this song for teaching. Xiao Yuncong, the younger brother of Zhongshan Mei. Jun "Xiao Yuncong" and "Chimuzi" are printed on two sides. "Renchen" is nine years of Shunzhi in Qing Dynasty (1652). The painter was 57 years old.

Xiao Yuncong's landscape paintings have various styles, but the basic style throughout them is that the brush and ink are multi-folded and thin, and some rubbing is added to the folded bones, rendering slightly, showing rich and flexible brush and ink. At that time, Songjiang School painting was popular in the painting circle, with its flexible lines and elegant brush and ink, while Xiao Shi's use of straight lines and thin and sharp ink was unique. Commenting on Xiao Yuncong's paintings in the Collection of Paintings of the Guo Dynasty, Xiao Yuncong said: "It is not a patriarchal clan, it is a family of its own, and the pen is also delightful and refreshing." It points out the key of Xiao Yuncong's painting style. His paintings are not specific patriarchal clan, but it can be seen that they evolved from the painting of Song and Yuan Dynasty. Without Song and not Yuan Dynasty, that is, Song and Yuan Dynasty, they clearly show Xiao's own artistic characteristics. Although this picture depicts the snow scenery, the expressive technique is slightly different from the usual ones, it still shows the typical features of Xiao's paintings.

In the picture, the strata and rocks are depicted by the method of high-altitude composition. The layout is full, but the fluffy branches of the dense bushes in the mountains make the picture full but not forced to congest. The shape of the hills and rocks is more square and hard, and the grazing brush in the depression is exquisite. The description of trees is also exquisite. The brush is delicate, vigorous and quick, and meticulous in describing the texture of the trunk and the shape of the leaves. The ground is cleverly left blank to show the snow on large areas of rocks and trees. The white snow is more and more quiet and desolate against the background of the gloomy dark sky. But the close-range tree feet and gaps occasionally reveal a number of poles of camphor, tree branches dyed with gamboge, leaves were applied with vermilion and juice green, all of which make the viewer feel the hidden vitality in the destructive atmosphere of cold winter, which is different in the works of snow scenery of past dynasties. On the one hand, it is because the author has a unique feeling of nature, and at the same time, it shows Xiao Yun's hope surging from the heart.

At that time, the imperial kings of the Ming Dynasty were in exile everywhere. In addition to the main regimes of Hongguang, Longwu and Yongli, there were still many people in the imperial clan who started to fight against the Qing Dynasty, and they had great momentum. As a survivor of the Ming Dynasty, Xiao always pays attention to these important events. In the inscription, "the good sound of the three Qin Dynasties at the right time" seems to refer to such an event.

Xiao Yun has studied Du's poems intensively and written a volume of Du's Ruxie. His poems also inherit the tradition of Du's poems, which are mostly about worrying about the times. Such painted poems are an example. In the poem, "Emperor Yun Tengdu Weihe River" and "General Gao Song of the Great Wind" are more vigorous and unrestrained, the rhyme is strong, and the pictures reflect each other, which truly reflects Xiao Yuncong's thoughts and feelings as a survivor of the Ming Dynasty.