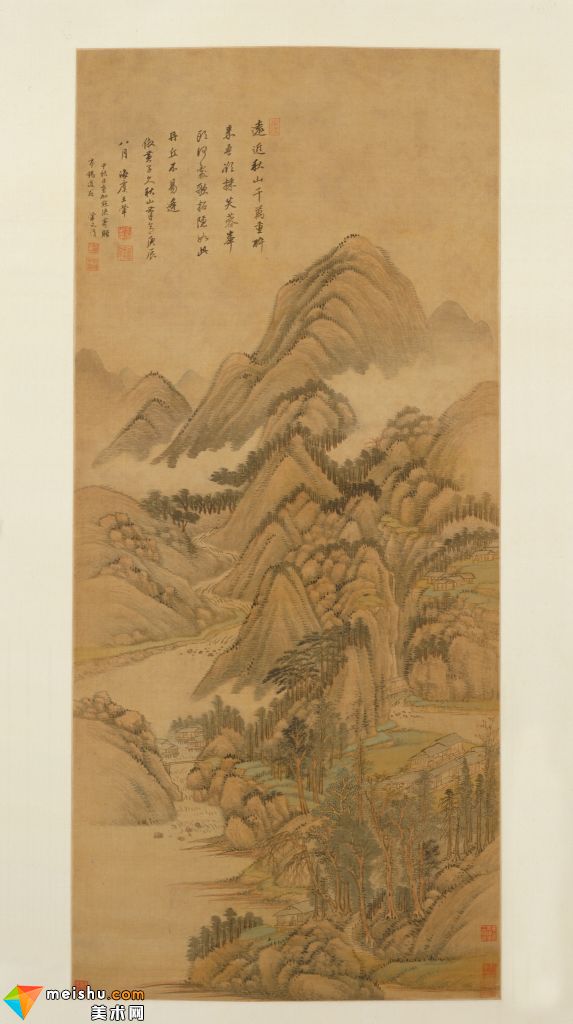 The painter at the upper left of this painting wrote a seven-word quintessential sentence: "Imitate Huangzi Jiuqiushan's brushwork idea, August of Gengchen, Wang Jian of Haiyu. The Mid-Autumn Festival was reintroduced to Emperor Xidao Weng. He knows it again." Jun's "Seal of Wang Jian", "Sixty Nine Years", "History of Liyan", "Old Man of Qing Hui" and "Huai of Mao" are printed on five sides. This painting was painted in the 39 years of Kangxi (1700) in Qing Dynasty. It was created by Wang Xiiming Huang Gongwang, a famous painter of Yuan Dynasty, who was 69 years old. From the inscription, the painting was completed in early August, and was redrawn for friends after the Mid-Autumn Festival. "Dr. Zhang Qinglian of Yushan" and "Chen's family collection" are printed in the collection.

The picture depicts the late autumn scenery in the Yushan area of Changshu, with a strange and secluded realm. The painter's seven-word quintessence: "Far and near the autumn mountains are so heavy that I want to pick lotus when I'm drunk. Where is the peak singing invisible, so that Danqiu is not easy to meet "makes the picture more full of poetic and picturesque, beautiful. Wang Fei's paintings follow Huang Gongwang's style, but are not limited to one family. His landscape paintings are of profound skill, imitate antiquity and are very similar. His sketches are also innovative and have the reputation of "gathering great achievements". Although this painting is a reward work, it has no rash habits. It is a simple study of Huang Gongwang's shallow mountains and waters. Its ink and brush are pure and delicate. The picture is full of antiquity, but it does not lose its own physiognomy. Wang Fei is a long-lived and creative painter, whose landscape painting has three changes: early, middle and late: before 35 years old, mainly facing antique paintings, ink and brush is not mature; 35 to 60 years old for the middle, learn from the North and South of the strong points, diverse features, ink and brush, known as "the first in the sea"; after 60 years old, it is late, skills. The method is more sophisticated, but the writing and composition often form a certain format, which is not as vivid as the medium-term. Wang Yi once said that landscape painting should "use Yuan people's brush and ink to transport Song people Qiu Qian, while Ze's Tang people's charm is Dacheng". This painting reflects his view of painting.

This painting was transferred by Professor Zhang Qinglian of Peking University in 1998 and bought by the Palace Museum.