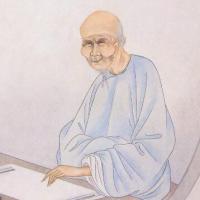 This picture is Wang Fei's masterpiece of landscape painting in his prime. The picture is composed of tall and distant rocks, deep valleys, Changsongping Lake, ancient wooden pans between rocky cliffs, overgrown weeds, mountain paths and Pantuo, stacked mountain springs gushing out of the valley and flowing into the lake. The water pavilions of the mountain halls between the canyons are either half hidden by the cliffs or crossed over the flowing springs. One sits up in the pine shade of the nearshore flat slope, as if enjoying the elegant scenery of lakes and mountains. The structure of the painting is rigorous and the artistic conception is quiet. According to the records of Tang Yin in Ming Dynasty, although the painter did not imitate Tang Yin's painting method, the painted stones were rubbed with Yuan Dynasty's dry brush, with Song Dynasty's axe-splitting method, vigorous and graceful, with ink-drying and wet, varied, very interesting and charming, which seems to be the change of the painter's early intensive study of Tang Yin's painting method, reflecting the painter's mountain in this period. Typical features of water painting.

Although Wang Fei did not sign his own year, his postscript was written in the year of Renzi, the eleventh year of Emperor Kangxi in the Qing Dynasty (1672), and Wang Shigu was 41 years old. This picture should have been made at that time or a little earlier. Above this picture, Wang Fei wrote his own seven-character poem: "Golden Rock has a quiet and interesting habitat, and Baiyun Sky Half Reading Building. The Milky Way falls to Qianfeng, Changhe and Songtao are in the autumn. It also pays attention to the light, Yun Shouping and peace. From the poems inscribed by the three people, we know that this picture was painted on boats in Piling (now Wujin, Jiangsu Province). When the three people gathered here, they discussed painting for more than 40 days. They gave each other poems, calligraphy and paintings, which is called the "Art Forest Event". This picture is a gift from Wang Fei.