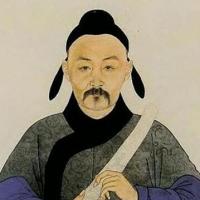 Supporting the pole Xuan Duzhang, the imperial governor is imprisoned by his height (the original text is "empty"). Keeping strict etiquette, Zhangjie Town is very.

Beyond the early cold of Biwa, the golden stalk is beside it. Shanhe embroidery households, the sun and the moon near carved beams.

The painter looks at his predecessors. Wu Shengyuan is good at it. Senluo shifts the axis of the earth, wonderful wall of the palace.

Cuiper has a deep view and red pears are frosty. The kite blows the jade pillar and the open well freezes the silver bed.

He retired from the humble Zhou Dynasty and passed on to the emperor of the Han Dynasty. If the God of grain is immortal, where is the place to keep his humility?

This is Dong Qichang's book Du Fu, a poet of Tang Dynasty, which is composed of five words and one rhyme in his book The Northern Address to Emperor Xuanyuan Temple in Luocheng in Winter. Although there is no written year, according to its style, it should be Dong's works in his middle and old age.

Dong Qichang's regular script was the first multi-pagoda stele of Yan Zhenqing, and it captured the essence of the change of Yan's calligraphy, which had the tendency of broad-mindedness and open-mindedness. His strokes are thick, vigorous, firm and open, and the characters and lines are clear and symmetrical. We can see the influence of Yan Zhenqing on his calligraphy.