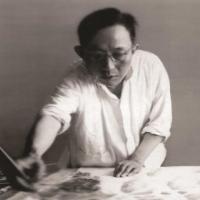 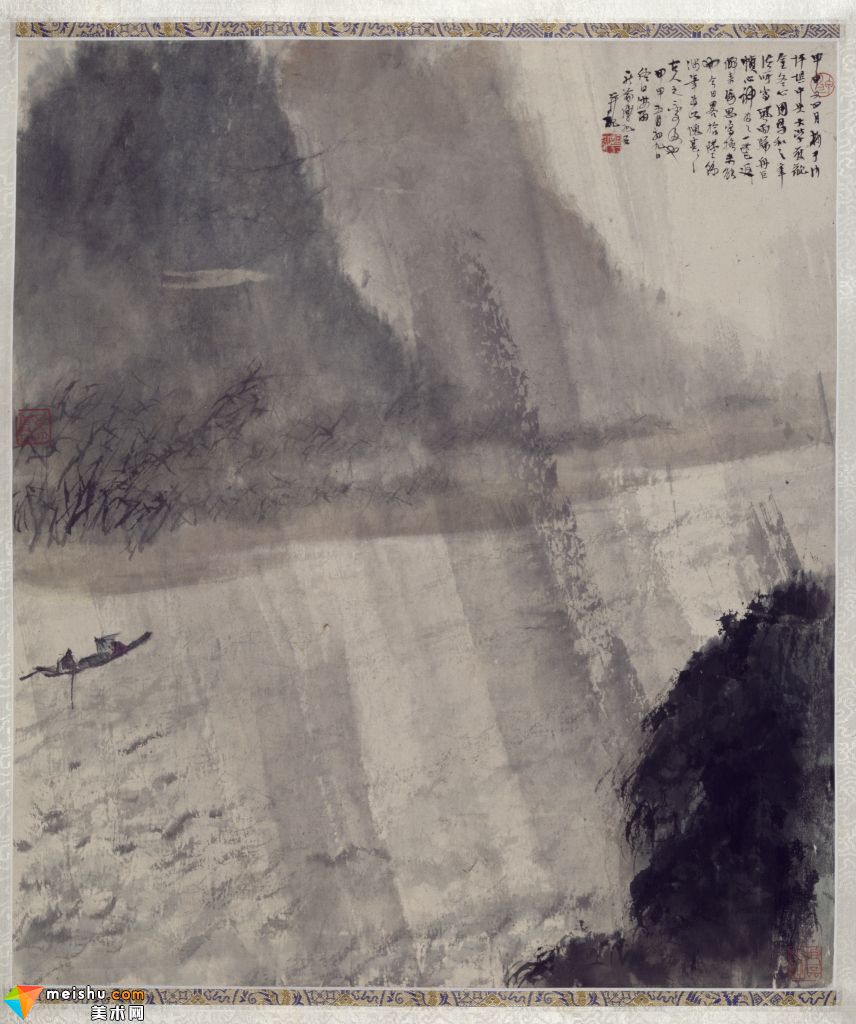 The title of this painting is: "Jia Shen and April Gao, who was visited by Jin Dongxin at Shapingba Central University, wrote the giant frame of returning to the boat with the brushwork of Ma He, and his mind is one of them." When I come back home, I can't think and write. Today, I picked up some Pendant ornaments, so I am ashamed of it. The ancients could not reach it. Jiashen rained all day on the ninth day of May. New Yu Fu Baoshi and remember. Jun "Baoshi Italian" white square seal, "Jiashen" Zhu round seal, "Baoshizhai" and "its life-renewal" Zhu square seal.

Fu Baoshi's paintings of rain began in the 1940s, which should be inspired by the rainy climate in the mountains of Shudi. Since then, whether it is the storm in Bashu or the drizzle in the south of the Yangtze River, it has been reproduced in his paintings, which is fascinating. Therefore, scholars often use "half of the mountains and rivers with rain marks" to describe the characteristics of his paintings. Speaking of painting rain, he thought that the ancient painters "did not draw rain directly, but could make people feel rain... By Jin Dongxin of the Qing Dynasty, he began to explore the method of drawing rain directly. I was influenced by him and absorbed the expression of Western watercolor painting. But for me, the most important teacher is nature itself. Nature triggered his inspiration and provided him with material. On the basis of absorbing the advantages of both Chinese and foreign rainpainting techniques, Fu Baoshi successfully displayed the momentum of rainwater without fixed shape and formed a strong appeal.

From the inscriptions in the picture, we can see that the painter of this department was inspired when he was watching Jinnong's Picture of Wind and Rain Returning to the Boat, which was painted by Jinnong at the Central University. After repeated deliberation, he only finished his writing. His cautious attitude can be seen. A boat was sailing in the stormy wind. The boatman rocked the oar with all his strength. The owner held up his umbrella to avoid the rain falling from the basin as far as possible. The reeds on the shore were broken by the strong wind, and the mountains in the distance were blurred by the wind and rain. The realistic effect of wind and rain makes people feel as if they are in the middle of it. It seems that they can hear the wind, rain, water and thunder interweave into a symphony, which is exciting to the heart and the spleen.