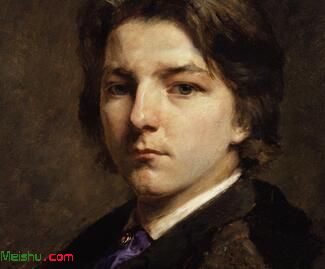 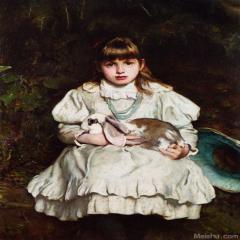 Holl was born in London to family of noted engravers, being the son of Francis HollARA, as well as a nephew of William Holl the Younger and a grandson of William Holl the Elder, whose profession he originally intended to follow. He was educated mainly at University College School. Entering the Royal Academy Schools as a probationer in painting in 1860, he rapidly progressed, winning silver and gold medals, and making his debut as an exhibitor in 1864 with A Portrait, and Turned out of Church, a subject picture. A Fern Gatherer (1865); The Ordeal (1866); Convalescent (the somewhat grim pathos of which attracted much attention), and Faces in the Fire(1867), succeeded. Holl gained the travelling studentship in 1868; the successful work was characteristic of the young painter's mood, being The Lord gave, and the Lord hath taken away.

In 1869 he was recruited as an artist by the engraver and social reformer William Luson Thomas, to work on Thomas's newly founded newspaper, The Graphic. In 1886 he produced a portrait of Millais as his diploma work, but his health rapidly declined and he died at Hampstead, north London, on 31 July 1888. He is buried in Highgate Cemetery.

Overwork undermined Holl's health, but his reputation was assured by the studentship picture. In 1870 he painted Better is a Dinner of Herbs where Love is, than a Stalled Ox and Hatred therewith; No Tidings from the Sea, a scene in a fisherman's cottage, in 1871—a story told with breath-catching pathos and power; I am the Resurrection and the Life(1872); Leaving Home (1873), Deserted (1874), both of which had great success; Her First-born, girls carrying a baby to the grave (1876); and Going Home (1877). Van Gogh admired Holl's works and wrote enthusiastically to his brother Theo about them.

In 1877 he painted the two pictures Hush and Hushed. Newgate, Committed for Trial, first attested the breaking down of the painter's health in 1878. In this year he was elected A.R.A., and exhibited The Gifts of the Fairies, The Daughter of the House, Absconded, and a portrait of Samuel Cousins the mezzotint engraver.

Holl was overwhelmed with commissions, which he would not decline. The consequences of this strain upon a constitution which was never strong were more or less, though unequally, manifest in Ordered to the Front, a soldier's departure (1880); Home Again, its sequel, in 1883 (after which he was made Royal Academician).